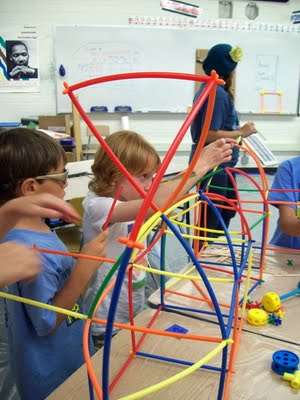 > Our experience at Camp Galileo: Part 2

Our experience at Camp Galileo: Part 2

Last week I wrote about our experience at Camp Galileo: Part 1 and the general infrastructure of that summer camp. My two girls, future 1st and 3rd grader, attended at the Hillsborough location. This week I’d like to share what my girls actually did there – and what they remember of the experience.

The entire week was planned around the theme Lost in the Forbidden City and my girls learned different things according to their age group. Honestly I wasn’t sure what they could learn at their age (what’s the Forbidden City to a 6-year old?) and the first days were indeed on the fuzzy side.

First day
On the first day as I picked them up from camp I was more excited than they were about the theme and asked: “What did you do today?”
“We played!”
Sure, that’s what they always answer through the school year but are you kidding me? I wanted more details so I pressed on.
“Did you learn anything about China?”
“No.”
I insisted: “How about the Forbidden City?”
“Well there was this scary guy with a chicken on his head, he wants to steal our fun.”
Hmm. Chicken?

Turns out Camp Galileo teachers made up a story about the emperor Zhu who was away from his palace because Chicken-fucius had taken all the fun away. Yes I know, a weird way to introduce kids to Chinese art and architecture but since we also did Camp Galileo last year, a good guy/bad guy story is part of their usual spiel. My girls initially said it was boring but at the end of the week they enjoyed the story.

Second day
On Tuesday, I got the same answers as Monday and was starting to wonder if I had the theme wrong when I looked at the Camp Galileo News – a one-sided paper you get daily that describes the highlights of the day and tells you about the morrow.

Ha! Looked like my future 3rd grader / Supernova (in Galileo lingo) had omitted to mention she made a Chinese landscape watercolor painting. And not even a bad one! I discovered it on the last day and I’m now looking to frame it because, hey, ain’t it cool?

Now I knew something was going on and it had to do with China.

Wednesday was Team Color Day. Camp Galileo has certain features that you’re bound to have each week and Team Color Day is one of them, as is Crazy hat (or crazy hair) day and in sunny places, Water day. On Tuesday night, my girls spent 30 minutes picking matchy-matchy outfits that were full-on red or  purple. On the face of it, it’s a good idea to create a team momentum but since not all kids participate, I’m not sure what the real impact is here.

The one thing that got me excited on Wednesday was an announcement in the Camp Galileo News. It read: “We need your recyclables! Campers use recycled materials for a variety of projects at camp. We’d appreciate donations of any of the following items: cardboard egg cartons, paper shopping bags, bottle caps, food boxes…”

By chance, our recycling bin is collected on Wednesdays and I had a box full of the right items. Off they went to camp Galileo! I also added cereal boxes I’d been saving for months without finding a purpose for them.

On Friday, my 5-year old showed what they built with it in her class: a cricket castle complete with cricket house and play structure! She was so proud of it, it was darn cute.

Fourth day
Thursday was Water Day and kids show up with a change of clothes, sunscreen and swim suits. Down on the lawn they enjoy water slides, water games and all things water. That’s when I knew that choosing Hillsborough over San Francisco was a smart choice. They don’t have Water Day in San Francisco. Too cold and too foggy! I’m not going to argue that the commute is not the same but if you can, better pick a place under the sun.

Fifth day
On the last day of camp on Friday, it’s pirate or princess day. To me, that was confusing. Here we are closing a week on Chinese art and architecture and kids can dress up as their favorite pirate or princess. Hold on, what’s that got to do with China? Nothing – unless you specify Chinese princess or Chinese pirate but then camp needs to provide  the costumes and that’s not going to happen. So pirate day? As much as I love pirates, aaaaaaaaaarg not so necessary.

Friday is also the last day and as many camps, it ends with a closing ceremony. Some camps put up skits, shows or small exhibitions. Camp Galileo in Hillsborough coordinated a parade of all teams, followed by a presentation by each teacher of the camp curriculum (that’s when I finally understood what they had been going), and then parents were sent off to sign out their kid and visit each classroom to collect the art and science work.

It was more fun than I had anticipated and I had the opportunity to chat with my neighbors. The mom next to me had signed up her 5-year old for her first summer camp ever and she couldn’t believe that her daughter had turned down a birthday party invitation that week so as not to miss any day at Camp Galileo. Wow, that’s camp dedication.

Others had several kids signed up like me, including “alumni” 5th graders who received a sweatshirt as a reward for their last year of Camp Galileo.

At the end of the day, I was happy to be led through the classrooms by my girls who boasted about this pagoda or that cricket house or this Chinese character domino or that lion mask. Clearly, they had had fun.

Two weeks later
That’s what I did not expect. Waiting for our food at a restaurant, my 7-year old asked me for a pencil and doodled away. I didn’t pay attention until I realized it was a Chinese pagoda. “What are you doing?” I asked her.

“I’m not done yet, I still need to draw a dragon.”

The perfect symmetry of the Chinese pagoda was there as well as the sweeping gabled roof of the structure. Interesting.