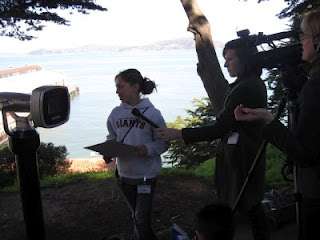 Did you think Fort Mason had nothing to offer junior minds other than the Young Performers Theatre and a few music/art classes? Think twice. They’re about to discover the true meaning of science and so are you.

“This screen tracks the mid-span of the bridge as it expands and contracts,” says Peter Richards. Mr. Richards is senior Artist-in-Residence at the Exploratorium and co-author of the Wave Organ, one of San Francisco oddest public works of art with concrete pipes of different sizes gurgling with sea water and making sounds best enjoyed at high tide with caffeine.

The screen he’s showing me looks like a small TV screen on a pedestal, one of those things tourists would use to watch the Bay from Coit Tower. He goes on: “We think of the bridge as an instrument to measure the temperature.”

Indeed as the bridge heats up, its steel cables expand and the bridge goes down by … up to 15 feet. As the day gets cooler, the bridge goes back up again. The bridge also expands and contracts sideways, its total length being 3 feet longer or shorter depending on the temperature. Think about that next time you cross the Golden Gate Bridge.

Bridge Thermometer is one of the new exhibits that the Outdoor Exploratorium unveils to the public tomorrow. The idea is simple: making science accessible by looking around you.

“There are scientific phenomenons to appreciate everywhere around you, things as mundane as cracks in the pavement,” says Charles Sowers, artist and senior exhibit designer at the Exploratorium.

The Outdoor Exploratorium consists of 14 different experiments spread out all over Fort Mason, all relating to the local environment, some harder to notice than others.

On Tuesday, I toured the exhibits with two fifth and sixth grade classes from the Commodore Sloat Elementary School. The kids were asked to fill up two pages of scavenger hunt and boy were they asking questions.

Their math and science teacher, Ms. Schock, is part of a collaborative effort between the Exploratorium and a group of teachers called the Teacher Institute. Together, they train teachers for outdoors science wherever they are. So thanks to Ms. Schock, these lucky kids get to experiment the exhibits first. And what are they?

Tasting the Tides is a modified drinking fountain that allows visitors to experience the surprising range of salt content in local waters. Did you know Bay shrimps needed a 2.5 salinity level and moved around the Bay to find it and reproduce? Closer to the tourists’ hearts, the salt level is why there are so many sea lions at Pier 39 and so few sharks. Sharks like it salty, sea lions less so.

Wind Arrows is perhaps one of the most noticeable exhibits and occupies a prime real estate location with a view on the Golden Gate. Red arrows at different levels show how wind patterns move in layers.

Up the hill is a former search light building converted into House of Days, a neat wall where a projector shows photos of the atmosphere every 60 minutes on the hour. With a button, you can zoom in and go back several days or hours to see how the sky looked like then. Kids really reacted to this one.

The one I remember most is neither the most poetic nor the most impressive. It’s called Fracture Mapping and it basically requires you to look for shapes on the asphalt of Fort Mason’s parking lot. Huh?

Actually, the shapes symbolize the shape of cracks in the ground, which cracks tell you a lot about the hidden geological stresses beneath your feet.

Other exhibits we stopped by included Speed of Sound, a funky post where you hit a button, hear a bell ring and get to figure out how far the bell is. It’s over there, by the edge of the pier. On top of the bell is a light. So which did you hear or see first: the bell ringing or the light blinking? How’s that for an explanation on the speed of sound and light?

The Aquatic Poetry Award goes to Shawn Lani of the Exploratorium team for showing us Tasting the Tides as well as Wave Tracing, a loose piling on the Festival Pavilion that traces the movement of currents, waves and tides with fine sand in a round glass box.

Mr. Lani explains the mechanics of the waves to hypnotized 10-year-olds: “Whenever a boat drives by, it creates waves. The waves hit the pier, bounce off that sea wall, come back and eventually hit this poor little pier. It creates drawing here with sand.”

How long does it take a wave to come out here after it hits a boat? The answer, dear reader, is yours to find out when you go out there. Simply count the seconds.