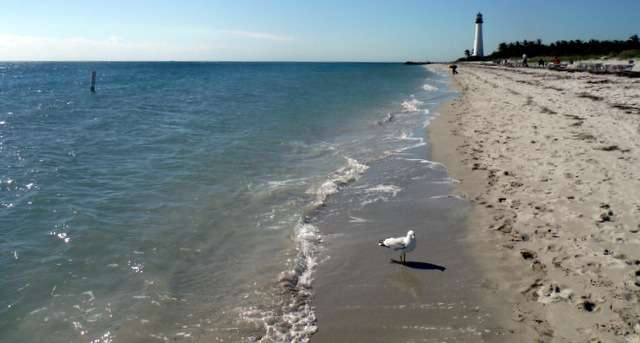 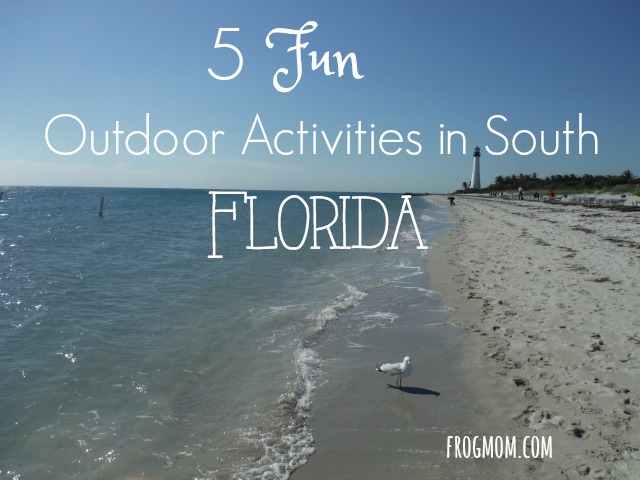 Florida is known as the Sunshine State for good reason. As soon as I landed at the Miami Airport, I pulled my sunglasses out. In the middle of January, the sun was shining on palm trees, lush sidewalks and impeccable islands of luxury. Based in Coral Springs, I stashed away my winter down jacket and got ready to explore. Here are 5 fun outdoor activities in South Florida, all great for families or single travelers. 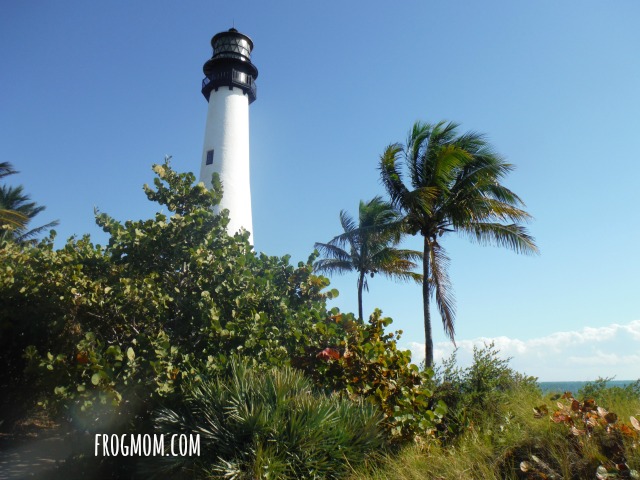 A Florida trip wouldn’t be complete without a visit to the world-famous Keys, island gems that mark the last land frontier before the Atlantic ocean. Key Biscayne is a small island connected to Miami by an elevated bridge that offered amazing views of this island paradise. My plan was to swim at Bill Baggs Cape Florida State Park, one of the top 10 beaches of North America. Driving across Key Biscayne on roads lined with palm trees and lush gardens was pretty awesome and at the end of the road, I entered the state park.

Built in 1825, the park’s historic lighthouse is a place where you can learn about local Seminole history and walk up the spiral staircase to panoramic views of Miami and the off-shore reefs. I don’t have much of a head for heights and 29m/95 feet above ground, I felt a little light-headed but the view was amazing. In fact, I hung to the railing for dear life and was relieved to come down.

From the lighthouse, I walked along the mile-long white sand beach and went in for a swim. The water was warm and slightly lumpy because of the wind, and I enjoyed floated around and stretching my toes–which, under the sun, is pretty awesome. The only other person in the water was a fully-clothed fisherman from Connecticut who was trying to fish in what he described were the worst fishing conditions: cold water, gale-force winds, and a fly-fishing pole. Indeed, he was about to leave empty-handed but I don’t know that I would have described weather conditions as “gale force winds.”.

Back on land, I rented a cruiser bicycle at the rental hut and cycled to explore the mangrove nature trail at the northern end of the park. Cruising on the paved bike trail, I reached the picture-perfect No Name Harbor and got off the bike to walk along the mangrove trail. Hard to believe that all this nature is minutes away from downtown Miami!

#2 Kayak On a Tropical Canal in Fort Lauderdale 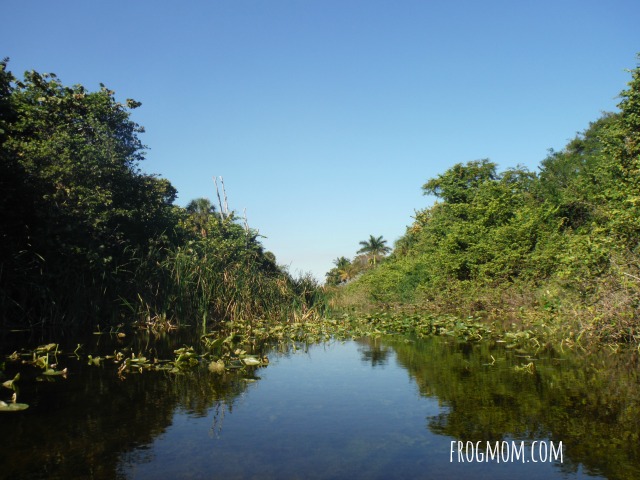 My next adventure took me kayaking along a mangrove canal at Hugh Taylor Birch State Park in Ft Lauderdale. This green oasis is a great place to recharge and see nature as it was before the condos and fancy yachts. Sandwiched between the beach and the intracoastal waterway, Hugh Taylor Birch SP offers much to do and I long hesitated between the many options. I could have hiked nature trails, gone through the beach tunnel to swim, rented a bike to bike around the park or picknicked along the waterway.

However, I really wanted a taste of boat travel as navigating is what Florida’s famous for. I rented a kayak at the rental hut, hopped aboard and paddled away. It was fantastic to navigate around lily pads, paddle through tall grasses, watch cormorants and ducks, and admire a 4-foot long iguana perched in a tree. On the canal, I encountered a family of four (2 boys and their parents) on a canoe that belonged to the 8-year old boy. Well, how very Tom Sawyer! 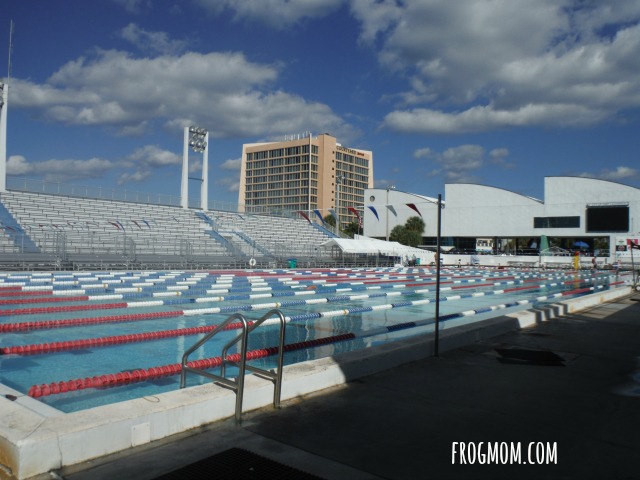 Tipped off by a local swimmer, I headed to the Fort Lauderdale Aquatic Complex next to the Internal Swimming Hall of Fame, a block away from the beach. Featuring two Olympic-size pools and a diving pool, this complex is used a lot for competitions and Olympians-training!

Fortunately, it is also open to the public when not used by elite athletes, so check the event schedule on the website to plan your visit. I changed in the period 1965 changing rooms (funny lockers, my small padlock didn’t fit through the doors) and walked to the one of the two 50-meter pools–one is divided with 50-meter lanes, the other Olympic with 25-yard lanes. All swimmers had their own lane and I was happy as a clam to find a free lane for lap swimming. How often do you find a 50-m lane just for yourself under the sun? It was great. The swimmer in the next lane over was an orthopaedic surgeon who swims there year-round and confirmed that it’s always easy to find a lane, even (especially?) in the middle of the day. The next couple hours flew by and I came out just before the complex closed. Great facility and if you forgot your swimming kit, the shop at the Internal Swimming Hall of Fame has you covered.

#4 Ride Some Waves in Boca Raton 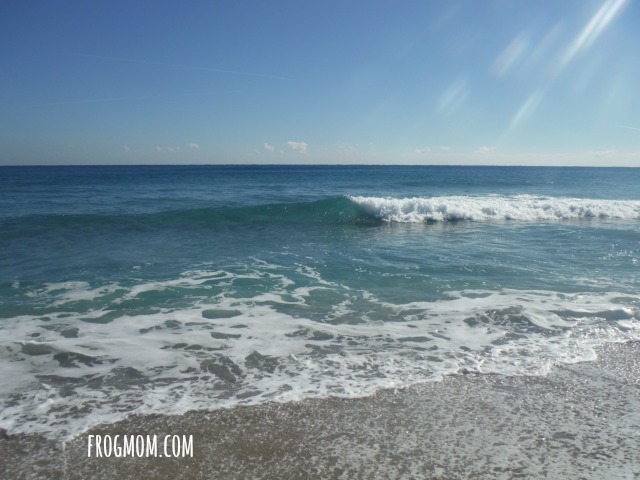 Can’t go to Florida without hitting the beach! Boca Raton’s beach at Spanish River Park was recommended to me for its “quiet” location (not surrounded by buildings) and nice waters. I found easy parking on the street and crossed under a “turtle nesting beach” sign (awesome!). An endless strip of fine sand, the beach is separated from the highway by sand dunes. From the short boardwalk crossing the dunes, I could see miles of beach stretching out along the big blue ocean. What a sight! Only a handful of wetsuited surfers bobbed around in the waves – not a single swimmer. A sure sign the locals thought the January windchill a no-no factor. I quickly laid out my towel, changed into my swim suit and ran into the water.

It was deliciously warm (a tropical 23C/74F) and the water was crystal clear. Coming in constant swells, the waves broke near the shore and at their highest, came a couple feet above my head. How fun! With delight, I spent the next hour diving under breakers, attempting to swim parallel to the shore, being tossed around by waves and floating on my back watching the surfers. This is an awesome place for kids who like to play in waves.

#5 Snorkel from the Beach to the Florida Reef

Ever heard of shore diving? Me neither. The Florida Reef is the only living corral barrier reef in the continental US and as I suspected, most of the reefs need boats to get to. However, a few reefs are so close to shore (only 425 yards) that you can literally snorkel from the beach. Locals call that shore diving. Excited about the prospect, I headed to Lauderdale By The Sea and had an awful time finding a parking spot. Dang, it’s a popular waterfront! Since I needed change for the parking meter, I went into a shop where I learned that I couldn’t snorkel legally without a dive flag. A what? Turns out the reefs are right beyond the swimming buoys and for safety reasons, it’s mandatory to snorkel with a floating flag that signals your position. It does make sense from a safety standpoint as they told me that the previous week, a guy had been run over by a boat. Also, the Coast Guard fine snorkelers without flags. Sigh. I didn’t have a dive flag and couldn’t find find a dive shop so late in the afternoon. 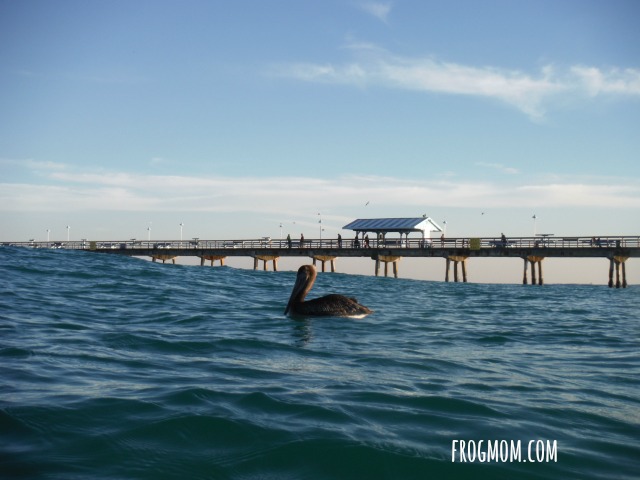 Forget shore diving. Instead, I set up camp on the beach where the sun still shone around 4pm, swam as far as I could along Anglin Pier and watched with envy a snorkeling flag a hundred yards away from me. A pelican came by and as the water was warm, I idled in the water as the only swimmer near the beach. As the current kept pushing me towards the pier, I regularly swam away without progressing much along the beach. It was a real nice time in the ocean and when the snorkeler got out (in wetsuit), she told me she bought her dive flag online. After I got out, I paid the pier entry fee ($2) and walked bare foot, dripping in my swim suit, all the way to the end. About mid-pier, I put on my shoes, semi-changed and chatted with a Cuban fisherman about his catch. Peeking over the rail, I hoped to see the reef but only saw the fisherman’s bait floating in the green blue waters. Shore diving, another time.

The Anglin Pier Reef is located north and south of the Anglin Pier at Commercial Blvd in Lauderdale By The Sea. Approximately 400-450 yards from shore. Don’t forget your dive flag!

This concludes a great week of fun outdoor adventures in South Florida, a place where I’ve never seen so much sun in the winter and the temperatures were great.