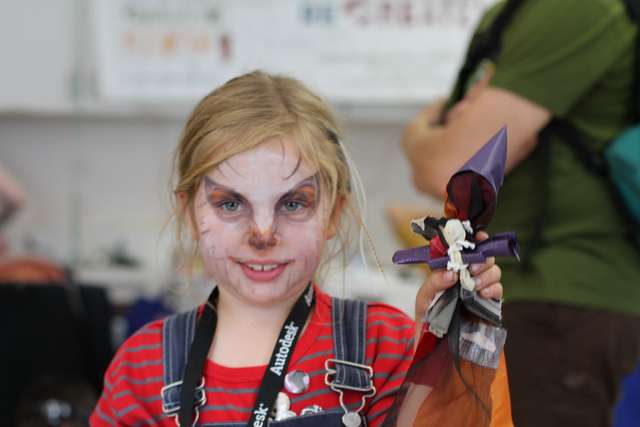 When I asked a 4th grader what he wanted to make at my crafts table, he just replied “My own thing.” Plain and simple. Wouldn’t tell me more. Though the answer took me aback, I decided to watch him do his own thing while I was helping other kids. An hour later, a friend had joined him and they finished plotting fake dynamite bars to creep out kids at school. That was on Sunday at my East Bay Mini Maker Faire booth where a big sign behind my head clearly announced “Make Kid Binoculars and Outdoors Pioneer Dolls”! Life lesson: creativity takes kids to oddball places where it’s OK for them to do their own thing. Go DIY spirit!

On Sunday October 16, 2011, the East Bay Mini Maker Faire was both a madhouse and a unique experience where from 10am to 4pm, I helped kids make two crafts to enjoy the outdoors: paper roll binoculars or telescopes and camping dolls. Here’s the story.

For this craft, I hijacked the concept of the corn husk doll or pioneer rag doll and came up with my own weatherproof version – the camping doll. Rather than the usual fabrics or rags, I looked for outdoorsy materials that would be sturdy enough to resist a winter hike or a rugged camping trip. Waterproof was definitely a plus. This is how I set out to find sailing cloth and tent material in the Bay Area.

Now, I was not going to buy a boat or a new tent to shred them to pieces – that wouldn’t be very clever. Fortunately two sponsors came to the

The night before the faire, several friends came to my house to cut the tents and bravely snipped through zippers and mesh material or figured out ways to cut rectangular shapes in dome-shaped tents. The oily and thin nature of the sail cloth made for interesting layers while the wrinkled vinyl of the tents added texture. The decking cloth proved to be too thick to use.

My first camping doll proof with an orange shiny tent material was unanimously rejected by an audience of 6 kids from age 3 to 8 – not cool, not fuzzy. I tried a variation with a thicker red tent material, added legs and that one won the heart of all kids. With a good design in mind, we cut hundreds of strips roughly 4″ wide by 12″ long. Thanks to Jason, Jacqueline, Laurance and Sofia for being such enthusiastic cutters!

Back at the faire, the camping doll activity was a big hit. It appealed to both preschoolers and grade-school kids which was good because I didn’t know what type of kids would go for this craft. The younger kids tended to gravitate more naturally towards the binoculars activity.

Always one to challenge stereotypes, I was pleasantly surprised to see that a few boys actually asked to make dolls. Less encouraging was the reaction of several moms (note: moms, not dads) saying to their boys: “No you don’t want to make a doll” or “Your doll needs to wear pants”. People, leave the kids alone! If they want to make funky dolls, where’s the harm?

One little girl spent about an hour at the booth making an entire family of camping dolls. First she made a mom. And a hat. Then she wanted a camping baby. Then she wanted a camping dad. Thank God my friend Inga has a crafty streak and could assist her wonderfully. We stopped short of the twice-removed cousins but I could see the endless possibilities in her buzzing bubbling young head.

Ironically while kids liked the camping doll right away, parents didn’t pay attention until I told them the materials were sail cloth and tent material. Then they took a closer look, touched the pieces and commented on how cool this was. What’s the saying – don’t judge a book by its cover?

If you too want to make these dolls at home, here is the process that I used. Kids: don’t cut your folks’ tent to make this at home. Ask your local sports store for free supplies. They can probably help you out.

The idea for paper roll binoculars came when I was researching my book. I had just finished exploring the Lobos Creek Dunes in the Presidio when five kids from a local daycare zoomed by with home-made binoculars hanging around their neck. Each had decorated their own and they were going to look for bugs. Immediately I knew it would be part of the crafts section in my book and it was the initial activity I offered for the E.B. maker faire.

The materials list was simple: empty toilet paper rolls and paper. I debated long about whether I should use fabric or paper to cover the rolls and paper won, largely because I found big topo maps at SCRAP.

Finding toilet paper rolls was a challenge because I signed up for the faire late in the game and couldn’t search for supplies up to a week before. Again, a village came to my rescue. Several moms from the Golden Gate Mothers Group organized neighborhood collections and Big City Montessori School, my girls’ former preschool, coordinated a full-on paper roll drive over 7 days.

Back at the faire, I stashed  200 TP rolls and regular paper rolls in a flowery chest, let kids pick two rolls the same size, let them choose safari pattern paper or topo maps and whipped out the tape and staples. Binocular time!

When a boy asked to make a telescope, I was tempted to refuse because the paper strips we had cut were TP roll size. Too small I thought. However  this was the master DIY faire so I reconsidered and said yes.

“Pick 3 pieces of paper!” I offered. And there, overlapping several bits of topo maps, we created the first telescope of the day, attaching it with a thick white rope for a more nautical look.

The binoculars were fun because some kids agonized on the choice of paper or map. Most parents preferred maps but the safari and jungle prints were cool too and all three had an outdoors connotation.

Basically I followed this process but I punched three holes in the rolls instead of two so the yarn would go twice through each tube. For the telescopes, I just punched two holes and used a thicker rope. Those were awesome because I found a box of ropes at SCRAP and kids picked their own.

Now the anecdotal side.

Funny Things People Said To Me

“My boy is too old for binoculars”: a mom after she asked me what activities I offered. Her boy was 10 years old. Sorry lady, the kids making dynamite bars don’t seem to mind my activities and they’re your boy’s age.

“Did you do all the hikes?”: a dad who bought my hiking guidebook. I know, surprising.

“I want to make a belt”: a second grader after he had already made binoculars, a telescope and a camping doll.

“Do you have a studio?”: the charming woman behind TinkerLab. Gosh, should I?

“I’m going to look for dragons”: a 7-year old girl who just made binoculars. That’s the spirit, girl!

I didn’t see any of it since I spent the whole day behind my table but I have eyes and ears. First of all, my girls enjoyed crafts in my room.

With  Befuse they made plastic bags fused by heat and reshaped them as purses. WithTinkerlab Studio (in partnership with Heather and Whitney from 510families), they made magnet pins. People made giant pinwheels out of recycled calendars with the East Bay Depot Creative Reuse,  and crazy stuff with Duct Tape Projects. Just next to me was a great book-making artist.

Almost every kid came into the room with a blinking robot pin from Maker Shed. My friend Olivier raved about the ComBot Combat Robots. I saw great-looking hats and more robotic stuff come and go. It seemed fantastic and my only regret was that I didn’t have time to go see the Smallest POstal Service in the World.

At The End of The Day

At 3.30pm Inga helped me pack up, my friend Olivier returned my girls – whom he had been taking all day around the faire – and I drove back home from Oakland in a zombie state. I was even happy I had leftover mac’n cheese from the previous night to eat for dinner.

It’s hard work but the E.B. Mini Maker Faire was a fantastic first public event as Frog Mom and I loved the interaction with kids and parents. Looking forward to more – of the “do your own thing.”