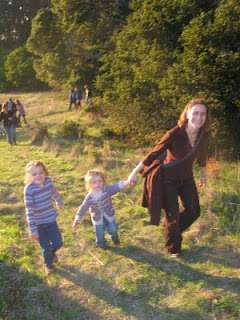 > Outstanding In The Field

Outstanding In The Field 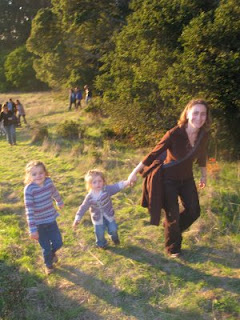 Mushrooms are my friends. No, not the Haight Ashbury kind. I’m talking porcini, shitake, chanterelles, morels and their numerous cousins.

I just love eating mushrooms. So much so that I recently became a member of the Mycoligical Society of San Francisco. When I read that Outstanding in the Field was going to host a foraging dinner in the Santa Cruz mountains right after Thanksgiving, I jumped right in. I’d read about these gourmet dining events on farm settings for a while, either in Sunset Magazine or in the New York Times.

This is what the founders have to say about them on their website: “Since 1999 we have set the long table at farms or gardens, on mountain tops or in sea caves, on islands or at ranches. Occasionally the table is set indoors: a beautiful refurbished barn, a cool greenhouse or a stately museum.”

In a nutshell: a hundred or so foodies get together on a farm and eat the produce from the farm prepared by respected chefs at long communal tables, mingling with perfect strangers who are supposedly kindred spirits. 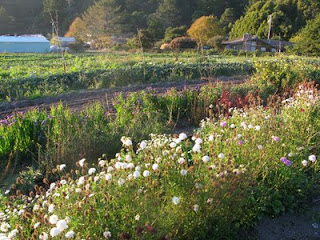 Our event took place between Pescadero and Ano Nuevo SR at Pie Ranch.

It started on an expanse of green grass around 3pm, halfway between the hen house and rows of November strawberries, with a glass of Tempranillo and Grenache Rose from the Santa Cruz Mountain Vineyard. On a camping stove nearby, the chef was sauteeing thin slices of porcini to render them crisp. A pure delight. After rounding up all the guests, our hosts gave us a speech on the ranch and the spirit of the event and we headed up the mountain.

On the trail, we started discussing with others. After all we were newbies (unlike many old timers who complained at how popular the event was) and we didn’t know who we’d sitting next to. We actually had a great conversation starter as we had our girls with us. There were only five children for 147 adults. We hooked up with a couple who admired the striped blue sweater our oldest daughter was wearing. “I wish they made the same one in grown up sizes!” she said. Too bad, we replied, it was knitted by my mother-in-law, an artist knitter in Paris. 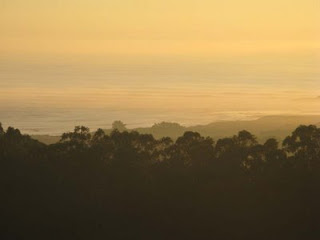 and white stretches of sand as the sun was setting on the horizon. We could clearly see the dilapidated lighthouse at Ano Nuevo SR, a most mysterious spot that’s now called home by sea lions.

After everybody had reached the top, someone gave the signal to go back down. I was disappointed though because I had misunderstood that we’d go foraging for mushrooms. Sigh. No foraging. Back to … the barn.

It was way too cold to dine under the stars so tables were set at the foot of the hill, under garlands of dried corn and ornamental squashes in the barn. When 150 guests sit at three long tables, you appreciate better the size of the event. Let’s eat! The appetizer was a mushroom mussel soup that was too salty for my taste but good otherwise.

Next to them sat a lawyer whose daughter followed anthropology studies and with whom we exchanged thoughts on the recent death of Claude Levi-Strauss the great French anthropologist.

I even recommended them Nigel Barley’s The Innocent Anthropologist, one of the few books 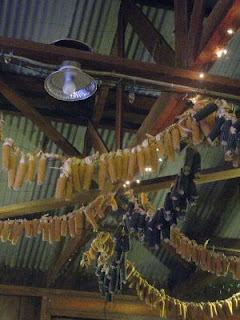 that ever made me laugh out loud.

Another book recommendation came from my screenwriter neighbors and it was The Last of the Really Great Whangwoodles by Julie Andrews (yes, of Mary Poppins fame). They said my girls would love it later.

Meanwhile my girls were scampering outside with a new found friend called Melie under a pitch dark night, chasing each other between cooking stations. As I walked out to check on them, I marvelled at the real whipping cream effort, a culminating point of the fruit pies we would eat later.

I chose persimmon over huckleberry but that was a misguided choice after stealing in my husband’s plate. Never mind, it was good 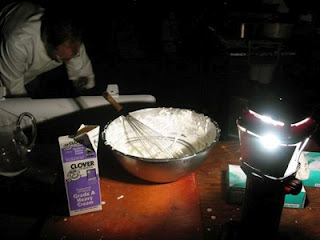 Good but not outstanding. This is actually my main point. The food was very creative (hail to sauteed stinging nettles in the saffron, fennel, prosecco soaked sable fish, bonny doon road stinging nettles, chanterelles & hedgehogs entree) – but it was not super impressive.

Some of it arrived lukewarm or cold and while large serving dishes foster family style dining, nobody exactly knew how small or large their individual helpings should be. It’s too bad. I do like the idea of a dinner at a farm.

It may be the fact that we had very high expectations about Outstanding in the Field. The tab was also pretty steep. People say their dinners on warm summer nights in the Napa Valley are heaven, but that late November night, I wanted to be more satisfied.

The only high note was discovering a selection of Bonny Doon wines along the meal. They truly live up to their reputation and brightened up our spirits.