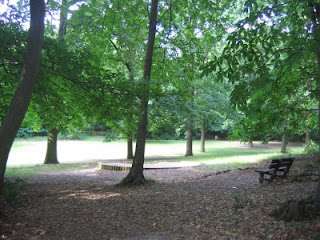 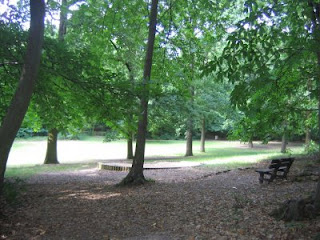 When looking for an outdoors party spot in the west of Paris, my constraints were

multiple and somewhat challenging. The place of my dreams would need to fit the following bill:

– not too popular to avoid weekend crowds

On that basis, the Bois de Boulogne, the Ile de Puteaux and the Parc de St Cloud were out.

The Bois de Boulogne is a nightmare to navigate without a car. The Ile de Puteaux is way too popular on weekends because of its sports complex, family events and jazz Sundays. And the Parc de St Cloud, although close to a train station, was hosting an vintage automobiles show on the day I was interested.

Therefore I broadened my horizons to Chaville, a quiet sleeping 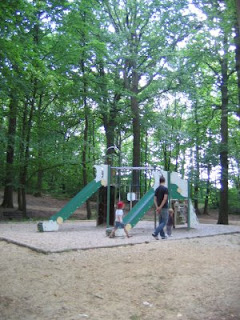 suburb of Paris flanked by historical forests on the east and west.

Chaville has been immortalized by a 1953 French song by Pierre Destailles called “Tout ca parc’ qu’au bois de Chaville,” gently blaming the blooming lily-of-the-valley for the birth of a candid child who’ll be taught lots of useless things in life such as peace treaties and the budget chief.

Chaville is accessible by train (20 minutes from the Gare Montparnasse) and car (freeway N118 roughly 30 minutes out of Paris). Behind the train station Chaville Rive Gauche is a steep path leading to the old cemetery.

Now, the trick is that behind the cemetery is a bucolic green expanse called the Parc Forestier de la Mare Adam, with open lawns, acres of century-old oak and chestnut trees, a pergola and a playground. This park is part of the bigger and better-known national forest of Meudon, the biggest and wildest forest of the Hauts-de-Seine. This combination seemed just right to me and I settled for it.

What seemed a daunting task at first was resolved in a day thanks to my step-sister Stephanie. Had she not lived in Chaville to tell me of this hidden jewel, I would never have stumbled upon it. That’s the discrete charm of local woods around Paris: they are not very well documented.