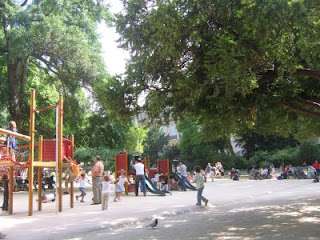 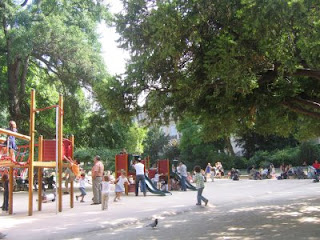 In Paris, my two favorite things are pastry shops (patisseries) and close behind, old parks reminiscent of times gone by. The Parc Monceau, in the 8th arrondissement, is such a park.

A charming 12-acre English-style garden, it is one of the most informal of Paris’ public gardens with trees growing where they please and statues placed randomly throughout the park. Purchased between 1769 and 1778 by the Duke of Chartres, the piece of land was designed by the landscape architect Carmontelle and adorned by period replicas of exotic monuments such a miniature Greek temple, a Dutch windmill, and an Egyptian pyramid.

Alas for the Duke of Chartres, his head did not resist to the blood-thirsty French Revolutio 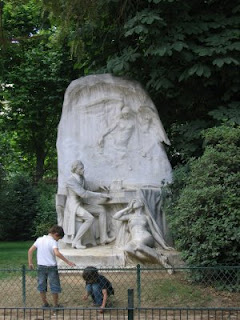 n and his garden was seized by righteous citizens. Thus in 1793 the Parc Monceau became an English-style garden and a place of popular dances. On October 22,1797, it even saw the first parachute jump ever in the world. The crowds stood there, expecting a bone-shattering disaster and were disappointed. Andre-Jacques Garnerin survived the jump and made history.

In 1860, the park was acquired by the City of Paris and configurated as it is today under Napoleon III.

On the edges of the park are two of my favorite Parisian museums, the Musee Cernuschi and the Musee Nissim de Camondo, the former hosting the Chinese art collection of the city of Paris – not the national collection which is at the Musee Guimet – and the latter being one of the most somptuous 18th centry private residences open to the public.

As my girls were playing at the playground, very popular with little Parisian kids, I couldn’t help admiring the classical facades of the buildings behind, certainly some of the most expensive park-view buildings of Paris. Through tall French windows and fleeting curtains, I got a glimpse of gilded three-tiered chandeliers and I helplessly wondered whether the inside was modern or o

Not far from the Parc Monceau, we stopped at the Patisserie Lecureuil, a pastry shop lauded by Clotilde Dusoulier author of Chocolate & Zucchini as “offering moist little cakes shaped like corks, whirligig cookies, and petits fours that seem right out of a children’s book.”

Since I was stopping there to get cookies for my little girl’s birthday party in the woods, it sounded just right. I settled on an assortment of macarons, almond-based round cakes, crunchy outside and moist inside filled with flavored creams. I can’t wait to taste the violet-black currant variety.