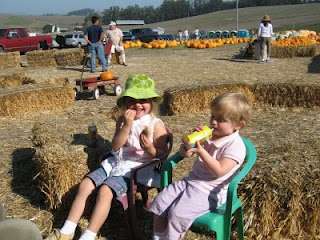 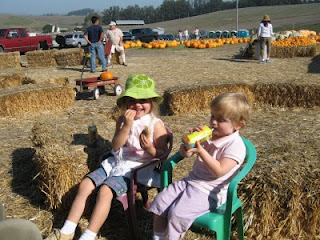 Had a wife but couldn’t keep her.

He put her in a pumpkin shell,

And there he kept her very well.

So goes the nursery rhyme. Nobody in a pumpkin shell at the Petaluma Great Peter Pumpkin Patch but it’s a great place to carve out a fun day between pumpkin fields and hay stacks.

The place is named after Larry Peter, owner of the Spring Hill Jersey Cheese company and founder of the pumpkin patch. We did not exactly plan on being there on the first weekend of October, but the timing was good nevertheless.

After we had lunch at Nick’s Cove above Point Reyes in Marshall, we headed back home on Petaluma’s back roads. I couldn’t believe how many “Organic Pumpkins” or “Pumpkin Patch” signs lined the roads. However when I read Peter Pumpkin Patch, I vaguely remembered going there last year (the photo is from last year) and having fun. “Turn right,” I told my husband.

Several hills later, there we were. A big parking lot on a hill, square tents above Spring Hill Cheese displays, mounts of various pumpkins ready to buy, a dirt field, tractors for hay rides, a hay maze and of course, a big field orange with plump roundish pumpkins.

The Great Peter Pumpkin Patch is a traditional pumpkin patch with a focus on farming. No haunted houses, no jumpy houses, no latex ghouls.

Farming you say? “I’m going to dig up potatoes!” shouted my 5-year-old, running for a pitch fork. The girl has a memory for anything hands-on. And so she ran. Went straight to the dirt field. She pitch-forked three glorious potatoes and that was it because we couldn’t find too many others. The family next to us also looked pretty much empty-handed with their three pitch forks and plastic bags. Dear Mr. Peter, I hope the potato situation improves until Halloween because right now, it’s potato-hide-and-seek.

Pumpkins, on the other hand, you could count by the hundreds. All on the vines, if you please. So little ones don’t think they all grow in cardboard boxes. Some funny-shaped, some dirty, some split open and lots just ripe and ribbed and bright orange just like the good Jack’O Lantern carving variety (or is the Trick-or-Treat variety?).

We brought on the wheel barrow, picked a pumpkin off the vine and walked back to the square tents. While the girls were getting “lost” in the hay maze, I picked pumpkins to decorate the house.

I’ll take two munchkins and maybe two others. Boo Pumpkins? Thank you no. Oh I like that green squash. Right in the wheel barrow. And a few Sugar Pumpkins for good measure.

$24 later we were out of there, happy and for our girls, tired. Too bad we didn’t have time to milk the cows and go for hay rides. Carving time was about to begin.