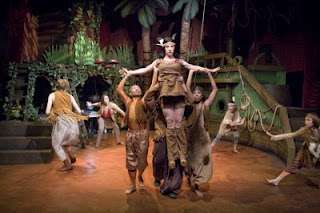 > Peter Pan the Musical at The Berkeley Playhouse

Peter Pan the Musical at The Berkeley Playhouse

Another reason to cross the bridge? A boy who can fly. An abusive pirate capta 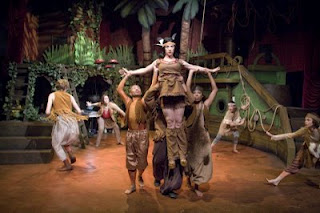 in. A fearless Indian girl. A lost island in Neverland. A jealous and impertinent fairy. Soaring high above Victorian London. Sounds familiar?

Last weekend, Berkeley Playhouse opened their summer performance of Peter Pan The Musical to a full house. We saw it with our 4 and 6 year olds and loved it.

Performing arts are usually all-kids or all-grown-ups affairs and this rare combination of both children (as young as 7) and adults works wonders. For some in the audience, the high point came when the pirate crew performed a manly tango with gusto. For others, the moment of bliss came when Peter Pan recovered his shadow played by a dancer in black a 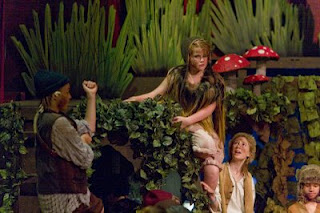 nd the pair waltzed away with Wendy in the nursery. Or it could be when actors climb in and out of coconut trees to engage in fights.

When we got inside the theater, we were relieved to see there were pillows on the floor at stage level for children to sit on because it was so crowded that we had to sit up in the pews (where the views weren’t bad, mind you, since it’s a small theater). After an introduction by director Elizabeth McKoy, the orchestra played th 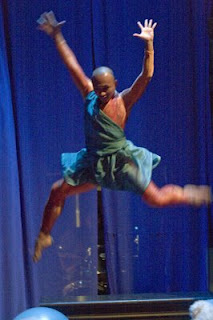 e themes and the show began.

At first, we couldn’t see the full set as dark blue curtains cradling the nursery were hiding the island coconut trees, pirate ship and Lost Boys hideout. Forgetting all about Disney’s green Peter Pan, we grew to appreciate Brandy Collazo’s impersonation of the egocentric likable brave boy who wants to never grow up. Ms. Collazo is already a veteran of Broadway-type performances in the Bay Area and she carries the character well into songs and bravado.

As we leave the nursery with aerials of various forms, the stage opens up on Neverland. By then, we’d already enjoyed solo and duo dance acts but we were about to discover the full extent of Tom Segal‘s skills as the show’s dance choreographer. The pirate dances are simply to die for – completely offbeat, highly energetic and humorous.

In the pirate crew, actually, Captain Hook (Gabriel Grilli) and Smee (Michael Laplante) form of the funniest male duos I’ve seen in a long time, followed closely by the two pirates who rock back and forth a giant blue wav 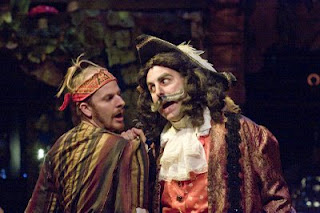 e in the grand battle finale with a mischievous look in their eyes.

The other character who really stands out, when you compare with Disney’s version, is Tiger Lily played by Rebecca Pingree, a former Janet Weiss in The Rocky Horror Show (tells you how charming and lioness she can be). Never before had I realized how strong a female character Tiger Lily was – and a leader too. The rivalry that sets her against Wendy to gain Peter Pan’s undivided attention is one of strong elements of tension in the musical, where Tinkerbell definitely takes the back seat (no, no scantily-clad blond bimbo playing Tink 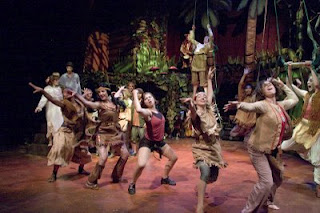 Of course, when Tink sacrifices her life by drinking the poisoned medicine, the audience joins in that fantastic clapping act to show that we all believe in fairies and that Tink shouldn’t die. When I saw Peter Pan the musical at the Orpheum with Cathy Rigby in 2006, that same wondrous clapping moment brought tears to my eyes too. Seldom as an adult can you actually take pride in believing in fairies!

After Indians and Lost Boys finally join forces and set aside their past resentment, that’s when the pirates strike and the final battle does not dis 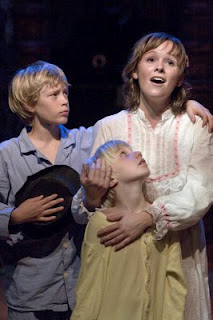 My 4-year-old told me with pride after the show that the crocodile had nodded to her during that battle, waiting to get to Hook. What a sweet child-loving crocodile…

Now for practical details, because you wouldn’t want to miss that show, would you? Peter Pan the Musical will be performed every single weekend through August 23 and features both evening (7 pm) and matinee shows. Note that the show lasts 2h30, but both my girls’ attention didn’t falter throughout. So go ahead, get your tickets here. Don’t go whining in September that you missed it in July. It’s not like you haven’t had advance notice.

Plus, by attending this performance, you are encouraging the Berkeley Playhouse, a great place that operates both as an arts conservatory and a professional theater. These guys really deserve a good audience for all the hard work done and the quality of the show. So as I said earlier, yet another reason to cross the bridge … or stay on your side if you already knew everything about sun-zoning.

3 thoughts on “Peter Pan the Musical at The Berkeley Playhouse”