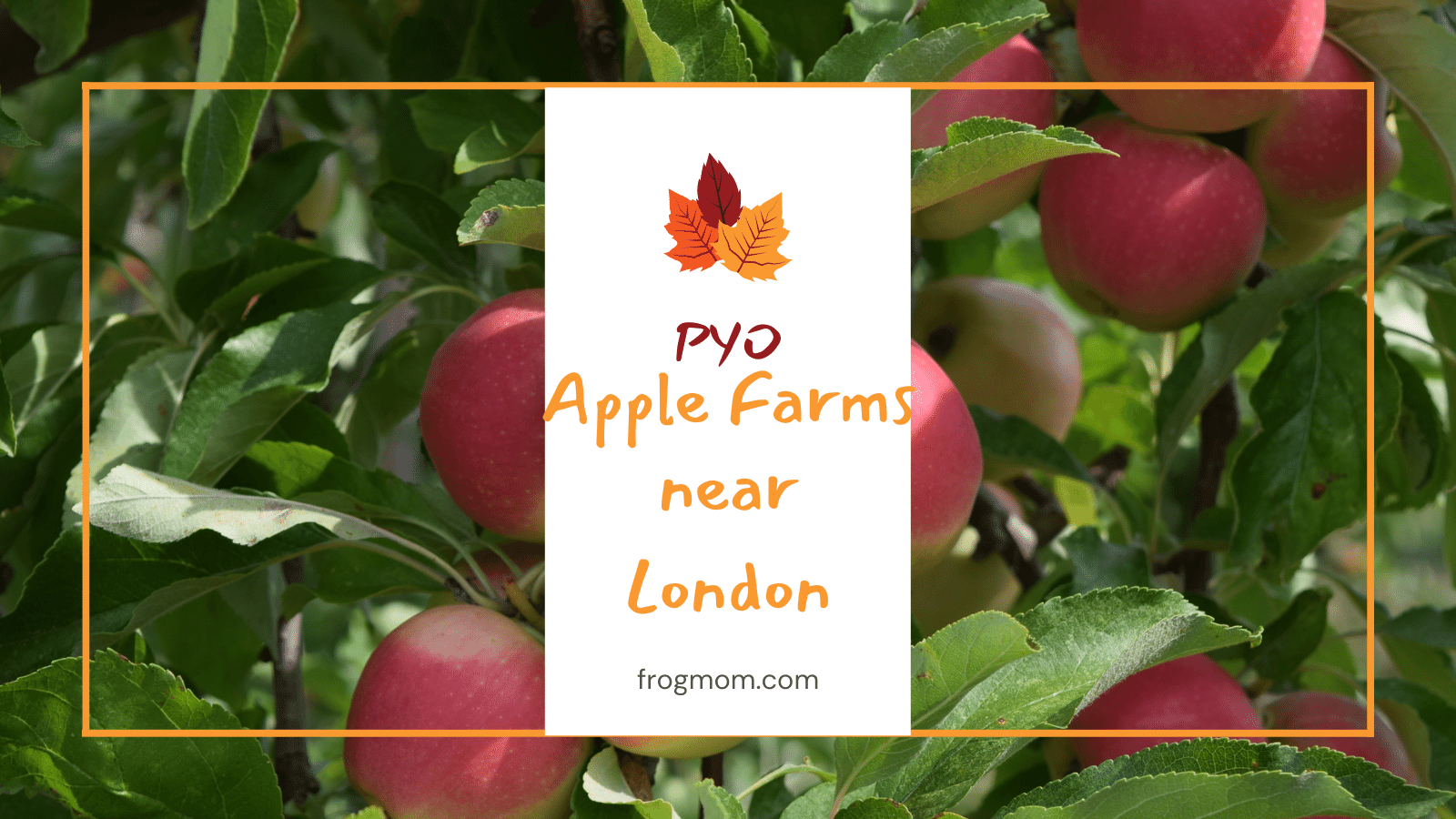 > Pick Your Own Apple Farms Near London

Pick Your Own Apple Farms Near London

Pick your own (PYO) apple farms near London make for one of the best autumn days out with kids. For anyone living in apple country, a stroll down rows of apple trees is like a walk in a candy shop. There’s small and big apples, real green and gloriously red ones, sour and sweet varieties, shiny and matte fruit. Kids want to pick apples off every single tree and it’s only at checkout that you realize that it’ll take a few weeks of everything apple at home to go down 13 kilos. Never mind the loot, apple picking is great family fun!

We don’t have a car and value a farm that can be reached by public transport, but those are few and far between. We also save Sundays for big days out and that narrows down the farm list because quite a few are closed on Sundays (sadly). Here are a few that we’ve tried and tasted successfully, bringing back a bumper crop of apples and other produce home.

If you prefer a less involved apple experience, try apple pressing days with the kids.

How often do you hear a farmer say he planted the apple trees you’re about to pick 20 years ago? That you should taste your way down the apple tree rows and pick the ones you like? A true mom-and-pop apple farm, Meopham PYO in Kent scores top points for fruit quality and for public transport, as you can reach it by train and a bit of walking.

My girls and I got off at Meopham train station and walked 3km (40 minutes) to reach the farm, stopping for sandwich and cakes at a cafe en route. Fortunately for us, the owner of Broomfield Farm is a charming old man who insisted on driving my girls and I back to the station when he heard that we came by train from London. With 15 kilos of apples in my backpack, that was a relief.

Meopham PYO offers a dozen varieties, though I did not note them all down and not all are ready to pick at the same time (you can call for a current apple report). We saw the following: Discovery, Bramley, St Edmunds Pippin, Cox, Early Windsor, Laxton Fortune, Lord Lambourne, Worcester Permain and Spartan.

A larger-scale operation, Hewitts Farm has a no-grazing and no-picnicking policy but the farm offers a large range of fruits and vegetables. What you pick is what you pay, which means that you better be sure you’ll like all your apples. Fortunately when we picked ours, we were very happy with our harvest and it lasted well into the winter season stored outside in a large bin.

The only hitch was that the apple trees were quite far on foot from the entrance and that significantly reduced our apple picking time as we came close to their closing time after a day at the house of Charles Darwin. While not really a charming spot, Hewitts Farm does the job and they have plenty of vegetables to stock up on. The good news is that they are also easily accessible by public transport from Knockholt train station. Walk out the station, then through a bridge, and across a golf course (1 km, roughly 15 min).

Garsons Farm is a huge operation that people visit mainly for the garden centre, cafe and shop. However if you walk/drive through the parking lot, you’ll reach the PYO fields. They’re huge!

Be ready to spend a lot of time picking more fruit and veggie than you can carry. Also, navigating the PYO fields without a car would imply a lot of time walking from field to field. We hired a car for that one. What people seem to do is that they drive around, stop in front of various crops (they’re well signposted), load up the trunk and continue until the next interesting produce, then pay the whole lot at the end.

During our last visit, we went for apples but the choice was quite limited (in terms of varieties, not actual number of fruit) and we enjoyed having a rental car for the day to harvest pumpkins (for Halloween), various squashes (for the winter), sweet corn off the plant (for right now) and a few late plums. If you’re interested by rare or special apples, this might not be the best choice but if you seek a one-stop shop, this is great.

I’ll be adding more apple farms as we go down our list, so please come back. I’ll update this post with new entries as we visit them.