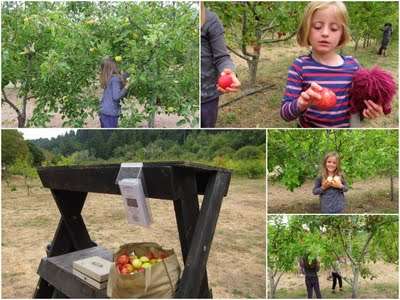 Back-to-school usually means apple season and last week I was dying to pick fresh apples off the tree to make apple pancakes. However Bay Area u-pick apple farms usually mean a Sonoma trip around Sebastopol or Healdsburg and I was too lazy to go across that big red bridge and drive another 60 or 70 miles north. When I heard about the u-pick apple orchards of California Polytechnic State University north of Santa Cruz, to Santa Cruz we drove! Judging by the 22 lbs of apples we jammed in the car, I’d say the trip was a crunchy juicy success.

When we turned onto Swanton Road past the famed Swanton Berry Farm barn, I looked at my odometer. The website said 4.6 miles from Highway 1. Through windy roads we drove and passed several farms but none that looked like an apple orchard. After mile 4 I started getting worried but around a bend we found it. It was the smallest and most laid-back apple orchard I’d ever seen.

A project of the Swanton Pacific Ranch, the 2-acre orchard is a working ranch where students learn the ropes of certified organic crops on a backdrop of redwoods and grasslands. Of students there were none, it was Sunday after all. The roadside was amazingly quiet. Just us and a car that was leaving. We pushed the chicken wire gate and let ourselves in. Nobody to greet us, the entrance is basic but it works: a modest shed with a scale and a money box on the honor system. Welcome to the wonderful world of Cal Poly apple orchards!

Fortunately I had tote bags in the back of the car because there are no bags either. At $1.75/lb of organic apple in the middle of nowhere, you can’t have it all. We quickly saw that only the first 4 rows of apples were ripe for the picking and initially thought “Is that it?” 22 lbs later, I was happy that was it.

The great plus for kids is that all the apples grow on dwarf trees so they’re easily accessible for pint-size apple pickers. The 12 apple varieties mature between August and November and last Sunday we had a choice between Royal Gala, Gingergold and Lodi. Later in September you will be able to pick a dark red apple that looks almost like a plum. “It’s the Sali Red delicious,” says Jena Casey, Research and Education Support at Swanton Pacific Ranch, “It leaves the flesh slightly pink after biting into it.”

My 6-year old had taken her knit doll along so when I asked her if would help to pick apples, she offered a lame excuse to taste apples solo. “Mom I can’t, I’m busy with my dolly.” So much for bringing woolly companions on expeditions. Fine, I’ll ask the other girl then.

Fortunately my 7-year old has a knack for picking fruit. Not just apples. She’s a skilled blackberry, raspberry, redcurrant, blackcurrant, fig, apricot, peach and any-fruit picker. I didn’t even have to ask, she was already back with her arms full of yellow apples. “Where do I put them?” she asked. Phew, it was going to be quicker than by myself.

I’m not sure it’s proper picking etiquette but we tasted a few as we went. Some of the varieties looked “unripe” to our untrained eyes and if we were going to come back with too many apples, they better be good. The good news is, they were delicious! On the tart side for sure, but I like tartness in fruit and they were juicy like only a fruit right off the tree can be.

The small juicy red apples of the Royal Gala variety won our heart for best apple to eat. Just the perfect snack size for a kid lunch box and red as the apple in Snow White. The Gingergold came in bigger and small sizes and it quickly became my 6-year old’s favorite.

The Lodi was my 7-year old’s favorite because its soft flesh but it looks like it’s only soft and yellow when the crop’s on the decline so we probably caught the tail end of that one. Note that with loose teeth, a soft fleshed apple is a wise choice indeed.

To better identify apples in the rows, you can refer to a color brochure available at the entrance by the scale, look at the wooden signs in front of each row, or check this map that tells who is where. You may need a magnifying glass to read the varieties but I couldn’t make the photo any bigger without risking total chaos on this page.

We weighed our harvest in the scale and I left a check in the money box because I was short on cash. If you are going to pick between 5 and 12 lbs, plan on spending $8-15.

Back at home, what did I make? The apple pancake of course! And baked apples too but I used the wrong apple variety (Gingergold) and they disintegrated. I need to try again.

Here is the apple pancake recipe, as adapted from the recipe provided on the Cal Poly U-Pick brochure. It would make a mean Sunday brunch item and the smell of roasted apples is enough to get every sleepyhead up. Enjoy!

Preheat oven at 400F. In a large ovenproof skillet, melt butter and add apples, turning them once as they get brown. In a bowl, mix all other ingredients. When the apples have cooked 10 minutes on medium heat, remove them from the stove and pour the batter over the apples. Bake 35 minutes or until puffed above sides of pan. When you remove it, cover it with a big dish and flip it immediately so the apples are on top. Sprinkle with icing sugar and serve warm.