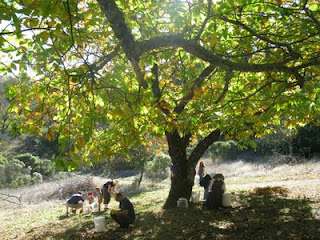 Thanksgiving will mark the end of the official chestnut season. While the apple season still sort of thrives in Apple Hill in Placerville, the chestnuts and the 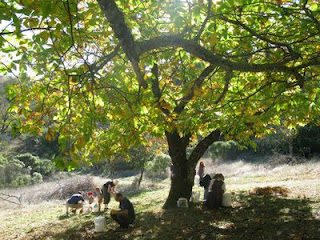 walnuts are pretty much done.

Before chestnuts stopped falling off trees, we organized a group outing to pick enough of them to feel like it’s almost wintertime. Prickly little things they are. Get the gloves on!

Skyline Chestnuts is the only chestnut farm in the Bay Area and the only survivor to the late 19th, early 20th century blight that decimated most North American chestnut groves.

I found out about this farm on Yelp, but this year it was featured in so many publications (Sunset, 7×7 Magazine…) that it’s a miracle there were still any chestnuts left for us.

On an early November Sunday morning, 20 of us met up at Skyline Chestnuts. Some of 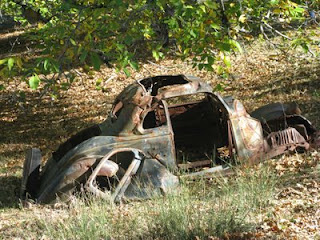 our friends braved the chill away on the previous night at the Portola Redwoods State Park.

As for us, we simply got up, had breakfast and drove diwn 280 south, turned west on highway 84, then south on Skyline. After a very windy road (that had us slow down and stop more than once for our carsick junior crew), we finally reached Skyline and its glorious views on the Pacific Ocean.

The farm is really just a sign out on the road, then a gravelly dirt road uphill and an old trailer where the farmer stands with his cowboy hat on. We each picked up a plastic bucket, a pair of gloves and followed the trail.

There under the first trees stood a lonely old car that delighted our youngsters. There’s nothing like a big rusty piece of junk to bring a smile to a child’s face!

Just after a few hundred yards or so, I held up my first chestnut like a gold medal prize. It wasn’t very big at all but it was edible, shiny, and brown. That’s all I wanted. 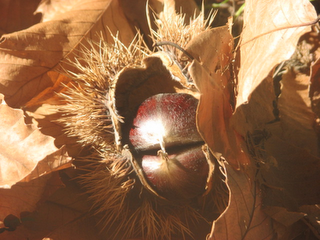 Family by family, pair by pair, adult by adult, we then dispersed under the trees, refraining from yelling out the “good” spots because you never know what’s next. The yellow and brown foliage crushed under our shoes as we ventured farther from the trail and its multicolored blanket grew thicker.

My youngest one was unfortunate in that chestnut thorns found her very early on. I got the tweezers out but even so, they were difficult to remove from her fingers and legs. Tiny, fragile, thin, chestnut thorns were treacherously invisible and my little girl cried and cried helplessly.

My oldest girl was more lucky and actually, could have been a hunter-gatherer sort of gal. Boy did she get good at spotting and carefully collecting chestnuts. It was like she was a semi-pro in the lightweight category.

Other kids were enjoying it too. The most selective of all our friend 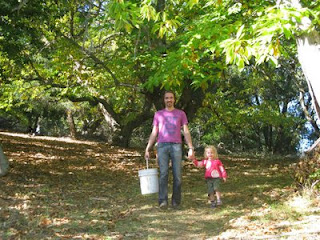 were the Italian clique who picked only the biggest ones, examining them from all angles as if they were truffles before allowing them a (much deserved) spot in their bucket.

An hour later, each family had gathered roughly five pounds, more chestnuts than they would probably eat all year.

Before paying, we also got from the farm a teddy-bear jar of honey harvested from beehives in the area. Next year if all goes well, the farmer will be able to sell “chestnut honey” – a type of honey made by bees who have feasted on groves of chestnut trees all year long.

It’s a rare delicacy that I love and bring back each time I travel to the South of France. Its strong and woodsy smell is beyond paradise for me. The one I buy in Beziers is Miel du Rouergue by J. Delous and I get it at Coucourus the grocer. But enough digression, back to the Peninsula! 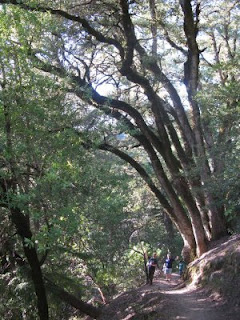 State Park for a picnic lunch.

Castle Rock is easily one of my favorite parks in the Santa Cruz mountains. The big bouldering area is a huge playground for young and old and it’s forested all the way. While we adults sat down and feasted on chicken liver and marsala pâté (recipe courtesy of Bon Appetit magazine), lentil salad, hummus, cheeses and almond and marmelade torte with lattice crust (again, thanks to Bon Appetit), the young ones set out to explore the big boulders behind us and were fearless in their endeavors.

Some of us parents watched them because two fairly steep drops appeared between two different rocks and we didn’t want to replay Cliffhanger that day. You’d figure after all that food, we were loaded enough for an afternoon-long nap. No, the children weren’t!

So a few of us put on our walking shoes and hiked towards Goat Rock. We did not go very far at all, perhaps a mile or so.

We stopped for a while on the wooden platform above the cliff at the waterfall, then walked some more and turned back.

Along the way, my little ones were literally obsessed with acorns so kept looking for deep brown shiny perfect acorns, while one of our friends was secretly collecting a few because he wanted to experiment making acorn flour at home. “You can’t find it anywhere in the stores!” he explained.

True enough, acorn flour is not common which is surprising in California given how widely it was used by the Miwok Indians. However, if you have acorns in your back yard, here’s how to make acorn flour.

Now if you please, I’ll get back to my oven. For lack of a fireplace, I’m still roasting my chestnuts in the oven because I love the smell.

One thought on “Picking Chestnuts in the Santa Cruz Mountains”