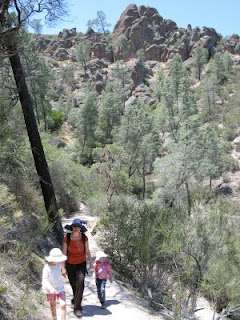 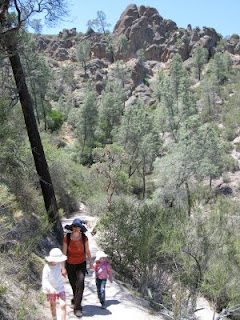 Salinas Valley, nestled amongst chaparral-covered hills lies Pinnacles National Monument, the remains of an ancient volcano. There, you will discover doughnut-shaped rocks, spires and canyons, caves and a reservoir: a small world that was recognized as a national monument by President Theodore Roosevelt in 1908.

Pinnacles deserves either a long day trip from the Bay Area or an overnight in nearby Hollister (or Fremont Peak, where we were camping), to allow ample time to cover the trails. Six years ago we hiked Pinnacles from the West entrance with my father.

Last week we entered through the East entrance off Highway 25, the latter being an immensely popular ride for bikers. Since the park gets steamy hot during the summer, this hike is recommended during cooler seasons. From the Bear Gulch Day Use Area, visitors have three options.

For a leisurely walk (less than a mile), the Bear Gulch Reservoir offers a sple 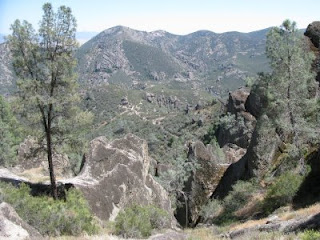 ndid view on crystal clear waters and a big “No swim allowed” sign, because well, it’s the kind of reservoir that gets water in your tap. Just next door is Bear Gulch Cave. However it is currently closed to protect a colony of bats so check back on the status after mid-July.

That said, we were there to sweat it out so we opted for a longer tour: a 5.3 mile hike around the Pinnacles through High Peaks Trail, Juniper Canyon, Tunnel Trail, High Peaks Trail (again, other side), and Condor Gulch Trail to finish. It was great and …. hot. With a 1,300 elevation gain, the hike was a nice w 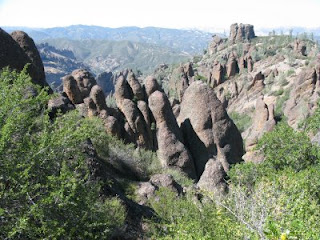 orkout – the more so as we forgot our real hiking shoes.

Strangely enough, we hardly felt the elevation gain as the trail gradually zigzagged up the mountain to reach the rim right below Scout Peak. At that point, we were surprised to spot a cute little house overlooking Bear Gulch Valley. A cozy Sierra Club shelter? Not so dear. A restroom of course! Gosh the National Parks Service is organized. (I want to be there when they empty the tanks with a helicopter.)

From the rim, brave ones can follow the High Peaks Trail, knowing that they will face “steep and narrow” sections – read “get me 911 right now!” We, wimps, went down the other side of the mountain through Juniper Canyon.

Occasionally we scanned the sky for condors bu 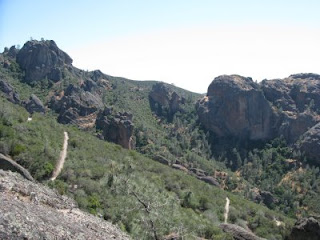 t the biggest bird of prey we saw looked very close to a turkey vulture. Steady flight path, wings black above, light grey below, we’ve seen it before.

Going on Tunnel Trail was fun because – o surprise – there is a tunnel, which prompted my other half to comment that “the Civilian Conservation Corps really had a lot of time on their hands.” Well you’ll see the tunnel, you’ll understand why. The CCC was actually responsible for nothing less than the stone buildings, trails, roads, bridges, and Bear Gulch reservoir at Pinnacles. Hats off to the CCC.

Going up and down Juniper Canyon and Tunnel Trail, we literally dreamed of hiking sho 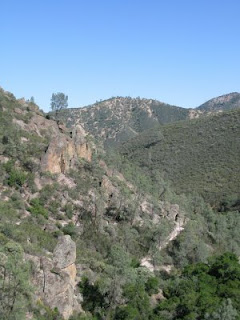 es as the trail’s dirt and gravel combo formed perfect shoe-skating slopes. Thank God for the teeny one’s denims. She ended up on her butt more times than we could count.

On the trail, we also perfected the ultimate hiking technique for youngsters: storytelling. We’ve already tried that a few times and it works better than bribes, better than water stops, better than ice cream promises. Taking turns, we each told a story, twisting and re-arranging the plot with elements of the landscape so that hiking became effortless for the young crew. Well … we still had to award an ice cream for outstanding hiking capabilities the next day. But hey, 5.3 miles up and down in the sun is an effort.

Right before the Overlook on Condor Gulch Trail, three shirtless young hunks passed us at a brisk pace. “Duh, they forgot their shirt at home!” scoffed my 4-year-old. We saw them again at the Overlook. My husband exchanged a few words with them and told me later “They’re in the army.” How did he know? To all the questions he asked, they answered with a firm and non-equivocal “Yes, Sir!”

When we finally got to the parking lot, the one item that felt better than a gold mine was a water fountain. We did the hike with less than a gallon of water for four and clearly, that was not enough. Remember that when it’s your turn. There may be a restroom on the way – but you ain’t gonna find no snack shop with cold sodas up there.