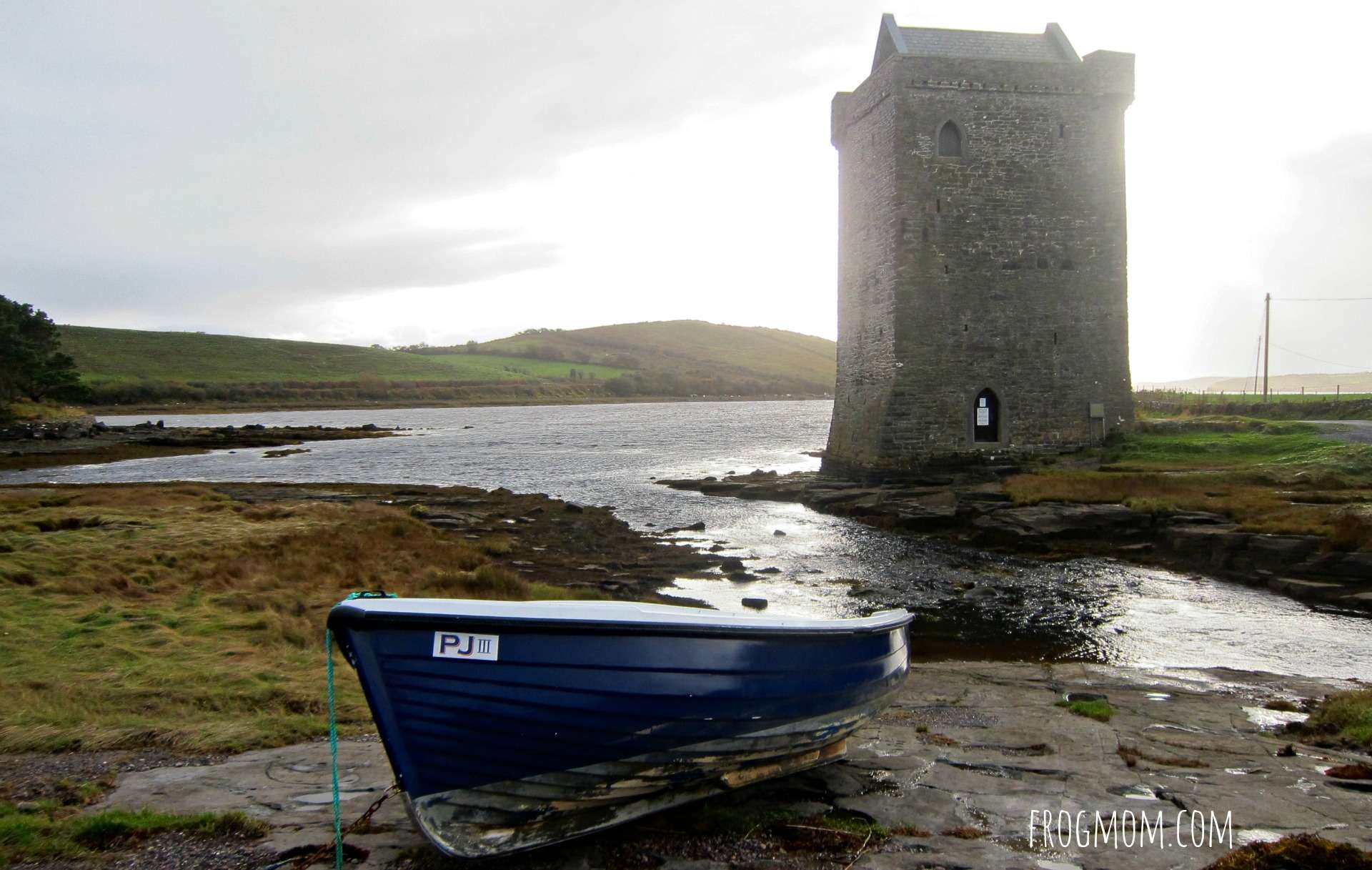 > On the Trail of Granuaile, Pirate Queen of Ireland

On the Trail of Granuaile, Pirate Queen of Ireland

When visiting Ireland, seaside strongholds of the West tell the tales of one kick-ass woman who stood up to the most powerful ruler of her time, Queen Elizabeth the First. Grace O’Malley, also known as Granuaile, was the 16th century pirate queen of Ireland and commandeered hundreds of men in pirate raids all through her life. Five centuries later, Granuaile has become something of a pirate legend and to celebrate a free spirit, we followed her trail on the wild west coast of Ireland. 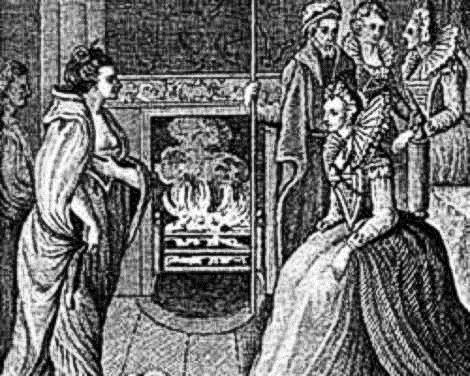 From Grace O’Malley to Pirate Queen

Grace O’Malley was born around 1530 in a noble family of Ireland. When her father died, she decided to reject the role of a 16th century noble woman and took over her father’s shipping and trading business–or, as some say, shipping and racketeering business. Thus began her life as Granuaile on the sea at the head of the O’Malley fleet of ships, a life she fully embraced to attack trading ships and Irish clans, becoming very rich and respected by her opponents. A starch defendant of Ireland, she opposed the rule of the English Crown and became chief of her clan, earning her men’s loyalty thanks to her strength of character and courage. Though she is an important figure of Irish folklore, few textbooks mention her nowadays and even fewer guidebooks tell you of the places she lived.

I hope that some day she will be recognized as the trailblazing badass pirate she was. In the meantime, start her to learn more about the indomitable Pirate Queen of Ireland. 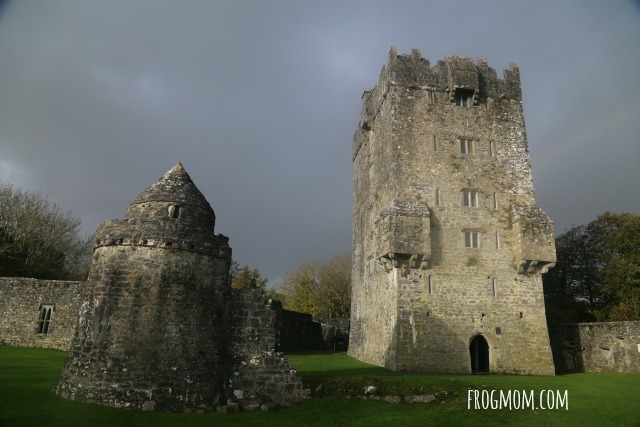 Half an hour from the city of Galway, you will find the early 16th century tower house of Aughnanure Castle, stronghold of the O’Flaherty clan, maverick rulers of the entire area of west Connacht from the west bank of the Corrib to the sea for some 300 years from the 14th century. In the middle of the 16th century, 16-year-old Grace O’Malley, the future defiant pirate queen, Granuaile, married Donal an Chogaidh O’ Flaherty. When Donal died and others tried to attack the castle, Grace successfully defended it, keeping her castle and earning a war-chief reputation by the same token.

We were lucky to visit the castle with a local guide, a service offered at the ticket booth when we came in. It was a great move as our guide was a history student and really brought to life the bare rocky walls and standing ruins of the castle. Without her, we would surely not have gotten so much of the atmosphere of the castle. Even my girls, who are usually bored to death during guided tours, loved hearing the story of the pirate queen and of the trap door where unwelcome guests could be dropped into the river flowing below the courtyard.

If your kids are mad for castles, make sure you stop at Aughnanure Castle, if only to walk on the tree-lined path that starts at the small parking lot and follows the river all the way to the grassy courtyard and castle structures. We visited on a rainy day and listening to all the defensive features of the tower from the basement looking out the entrance door at rain pelting down from the sky was a fantastic moment.

Aughnanure Castle is on the shores of Lough Corrib outside the small town of Oughterard. It’s only open from April to late October. 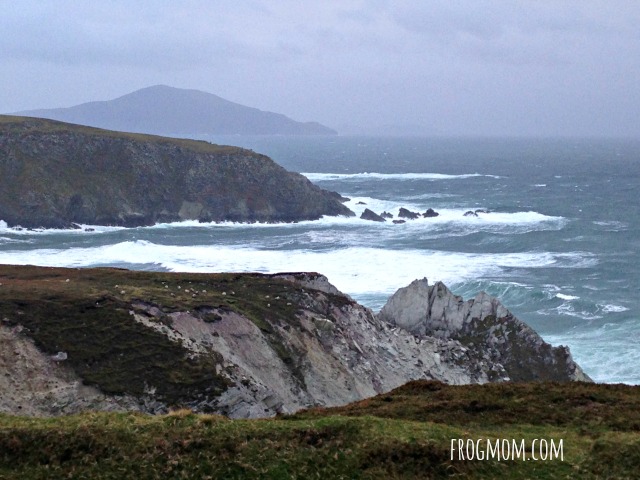 Clare Island is where Grace O’Malley grew up but it really became important later in her life. After her first husband died, Grace remarried with Risdeárd an Iarainn, owner of Rockfleet Castle, strategically situated near Newport, County Mayo, as well as other lands like Burrishoole, with sheltered harbours in which a pirate ship could hide. After a year of marriage, Granuaile divorced Risdeárd but kept the castles and made Clare Island the base of her pirating expeditions.

You can’t drive into Clare Island as you have to take a ferry. However, you can get a feel of island life by driving all the way to the western tip of nearby Achill Island, to enjoy sea-swept views of towering sea cliffs and bare mountains. On a windy day, you’ll definitely have to hang on to your jacket when walking on top of the cliffs with sheep as woolly companions. Watching the raging sea break over reefs and offshore rocky inlets gives you great respect for local fishermen. Anybody navigating these seas confidently would have been a standout sailor indeed.

Entering the island through the bridge at Achill Sound, follow the road in an anti-clockwise loop, going through Cashel, Dugort, pass the Slievemore Deserted Village, make a left at Keel to the end of the road for that end-of-the-world feeling and retrace your steps to Achill Sound via Keel and Bunacurry. 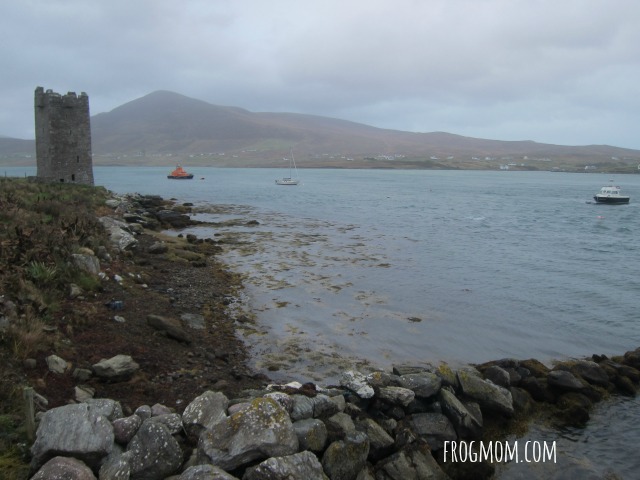 The Tower at Kildavnet, in the south-east corner of Achill Island, sits quite alone on the shore and is one of the lesser known sites in Ireland. A perfect example of a 15th century Irish tower house, it is thought to have been constructed by the Clan O’Malley in about 1429 and Kildavnet Carrick is one of a series of strongholds that Granuaile established along the western seaboard (she is said to be buried in a similar tower on Clare Island) as she dominated the waters during the 16th century.

Look for the sign Caisleann  Grainne on the road, with a castle icon to find it. As the castle is private property, you can’t visit it inside but you can admire it from outside and walk along the seashore with a splendid view on the bay and fishing boats. Kids can also spice up the visit by searching for this geocache by the castle (about geocaching). The old graveyard beside the castle has beautiful graves, including three mass graves (famine, fire and drowning) that tell you of the hard times suffered by local families.

To find out more about Irish historical sites in this area, follow the Clew Bay Archeological Trail featuring 21 archeological and historical sites between Westport and Clare Island. However, little ones are likely to be more excited about the Woodland Faerie Trail at Valley House. 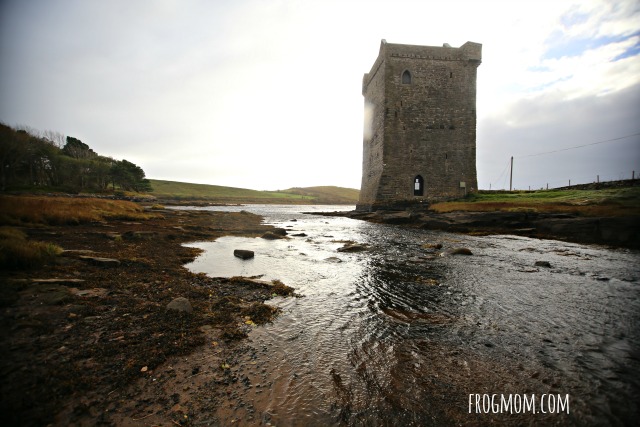 Last but certainly not least on the trail of Granuaile, Rockfleet Castle is where the Pirate Queen spent her late years and where she most likely died around 1603, aged 73. Legend has it that she ran the mooring of her ship through the loophole in the south wall and tied it to her bed in the top bedroom at night. According to the description on the door, the main living area with stone floor and arched fireplace is at the very top and can be accessed via a spiral staircase. Kids will appreciate that the guarderobe (medieval word for restrooms) was flushed twice daily by the tide. 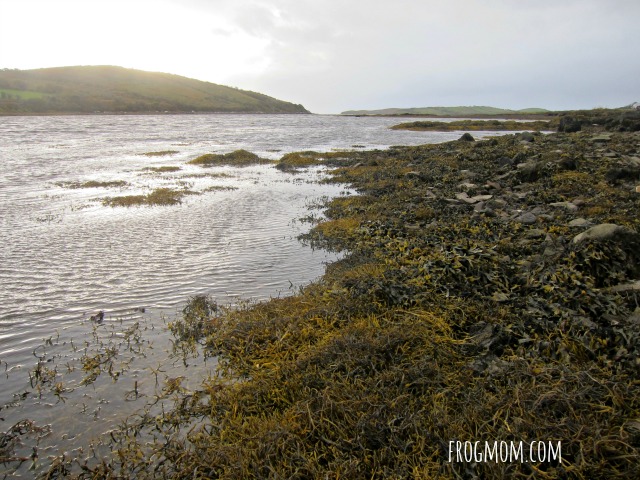 Today, entering Rockfleet Castle isn’t possible as it’s undergoing restorations but when we visited, there was a funny note on the door suggesting that we could get the key from one of the neighbors. Never one to miss out on pirate fun, I walked over to the two closest residences. The first house was a fail as it was closed and barking dogs kept me at bay but I got lucky at the second house, where a nice old man answered the door. Yes, he did remember the key but the former keyholder had moved away and the key had now been transferred to someone else who didn’t live there. So much for trying to sneak inside the most famous of the Pirate Queen’s strongholds.

Rockfleet Castle stands at the mouth of a small inlet on the northern shores of Clew Bay, 5 miles/8km from Newport on the north west coast of Ireland.

This concludes the trail to follow the adventures of Granuaile, Pirate Queen of Ireland. She is a fascinating character and if you want to learn more about her, her biography by Anne Chambers is called Granuaile: Grace O’Malley – Ireland’s Pirate Queen

(click here for UK readers). It’s a great read and I learned much about the life of the Irish people in the 16th century as well as the life of an amazing woman who decided to seal her own destiny with courage and leadership. Let’s hear it for the Pirate Queen!

One thought on “On the Trail of Granuaile, Pirate Queen of Ireland”