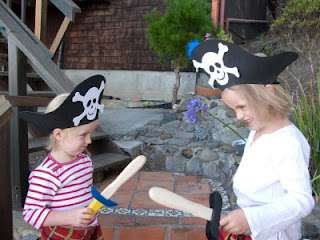 Unbeknownst to most who view San Francisco as a hippie hangout, the city is also a great pirate magnet. As a mid-1800s city, San Francisco does not have the luxury of centuries of pillage, buried treasures and sunken galleons, but the city by the bay largely makes up for it with pure pirate spirit.

While the first is pretty self-explanatory (well – you just talk like a pirate), the second deserves explanations. On Park(ing) day, city dwellers reclaim metered parking spots, feeding the meter all day, laying down astroturf and picnic chairs on city streets to promote green spaces and temporary public parks. As my brother says “Only in San Francisco would this happen.” I can’t argue with that.

We started the day by dressing up my girls in pirate garb. We did not have eye patches but striped shirts, Jolly Roger hats and colorful belts go a long way in the yo-ho-ho.

They brought five pirate books to school, including the hilarious 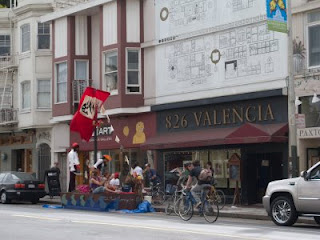 story of the dandy pirate called Backbeard: The Hairiest Pirate Who Ever Lived.

After school came more fun as we proceeded to 826 Valencia, the one and only pirate supply store in San Francisco.

What a surprise when we noticed all the people sitting down on Valencia street with potted plants, whole-grain muffins and “sunbrellas”. I didn’t know it was Park(ing) day then.

My girls were sooooo impressed. “Mom, how do you know this place?” I felt a pinch of pride. Jocelyn, an eye-patched booty-hunter, came down the ship to give golden doubloons to my girls. You should have seen the look in their eyes. 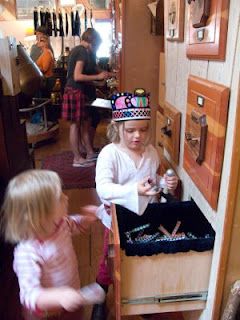 the store and it felt like walking on treasure island.

The store is whimsical and deliciously weird. Walls are lined with wooden drawers bearing mysterious names (shiny, hairy…) and you have to pull the drawers (some way up high) to discover what’s inside. Some drawers were so high that I actually had to lift my girls so they would peek inside and report back on the contents!

It was so much fun that we opened every single one of them drawers at least twice. Or thrice, as Jocelyn the booty-hunter came inside the store and helped my budding buccaneers to discover hidden treasures, re-opening the same drawers.

By the counter, legions of classy eye-patches await customers, as well as looking glasses, black and white dice with Jolly Roger faces, enormous and cumbersome locks, keys and just about anything you probably would never need but looks funky enough to be bought.

The weirdest of all is the big barrel full of lard. Yes, lard used to be a very common commodity and if you don’t know how to use it, there’s a sign with all the uses of lard.

I did not bring any back home but I did purchase a deep blue glass prism, an object formerly inserted in 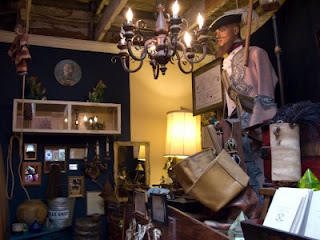 the deck of wooden ships to reflect any signs of fires starting below deck. This shall prove useful in our newly-constructed tree house.

Now, if Friday September 19th had been the first friday of the month, we could have topped the day at Alameda’s Speisekammer, a German brew pub that features Pirate Night with live music and dressed customers. Or we could have splurged at Forbes Island, San Francisco’s only underwater restaurant on an island smack dab in the middle of Fisherman’s Wharf by the sea lions.

But we only felt like going back home for a quieter evening and my girls were allowed to watch the first fifteen minutes of Pirates of the Caribbean.