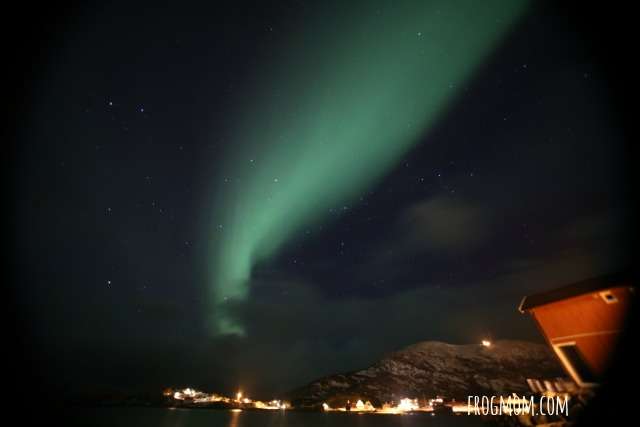 > Best Places To See Northern Lights in Norway on a Budget

Best Places To See Northern Lights in Norway on a Budget

Until last year, we had never seen, with our own eyes, aurora borealis, also known as northern lights. To me, these wonders of the winter night sky belonged to National Geographic magazine and intrepid professional photographers. I never thought that we would see any with our girls but then, northern lights are mostly an Arctic region phenomenon and we’d never traveled that far north.

Fortunately, we recently started traveling on Norwegian Airlines from London as they offer really good prices to Norway and Scandinavia and this got me thinking. What are the best places to see northern lights in Norway? A Google search later, we booked a February trip to Tromso, northern Norway.

Tromso, Norway, is 400 km north of the Arctic circle and is the northernmost city in the world, with a population of more than 50,000. North of Tromso, it’s reindeer and Sami territory. Known as the “Paris of the North,” Tromso is the Norwegian gateway to the Arctic and despite its extreme location (it’s further north than Murmansk, Russia), it is very lively. We were spoiled for choice when it came to restaurants and activities, even in the dead of winter–which was hard to believe.

What’s the Best Time to See Northern Lights in Norway?

Northern Lights are best seen in winter, when long periods of darkness and the frequency of clear nights provide many good opportunities to watch the auroral displays. In Norway, October through March is considered the best time of the year, with January and February considered peak months for Northern Lights activity.

Usually the best time of night, on clear nights, to watch for auroral displays is magnetic midnight (adjust for local time). We saw two very long episodes of northern lights that lasted more than an hour at around 10 and 11pm, respectively.

Where Can you See Northern Lights in Norway? 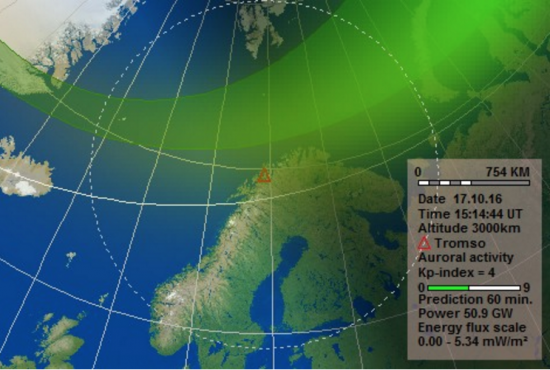 Tromsø lies 69° North, almost right in the middle of the Aurora Belt that’s between 65° and 72°. This makes it geographically one of the best places to see Northern Lights, even on a night with KP-index of 0. You can’t go far wrong by landing in Tromso, renting a vehicle and being ready to travel in winter road conditions.

As far as optimizing your chances, Northern Lights require a few essentials to be visible:

Add to that a little of luck, because you don’t know when solar winds are going to hit the Earth’s magnetic field and cause auroral displays.

Can You See Northern Lights in Norway on a Budget?

Sure, Northern Lights tours know the good spots and understand meteorological alerts better than anyone. However, there are easy and budget-friendly options to see Northern Lights in Norway without a tour.

DIY How to See Northern Lights in Norway 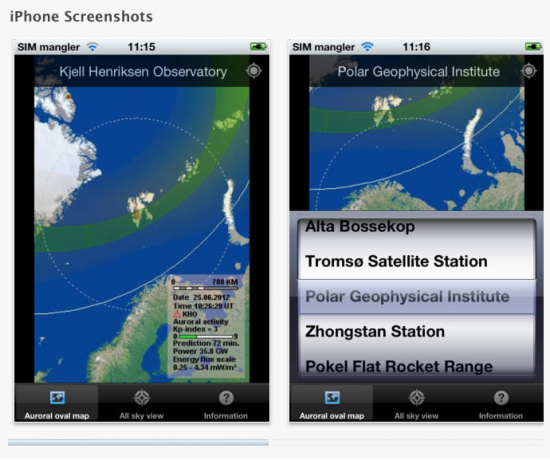 According to local guides, it is possible to see northern Lights around Tromso on 85% of the nights if you are willing to travel. As mentioned before, the challenge of Tromso is its volatile coastal climate, but since Tromso is connected to the mainland, you can drive North or South depending on where the clear skies are.

To know where to go:

Be Ready to See No Northern Lights

I’m throwing this out there because there is no absolute guarantee that you will Northern Lights. You can make your best efforts and still see nothing. To have a great time and enjoy the trip, it’s best if you plan your evenings around fun activities that you are going to enjoy regardless. That’s what we did. 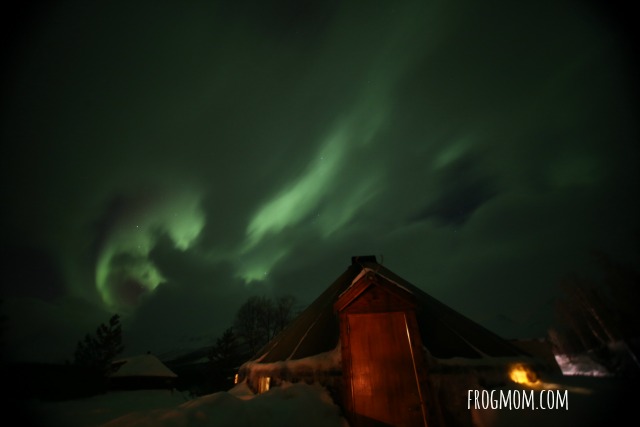 On our first Northern Lights sighting, we were just coming back from dogsledding with huskies in the Lyngen Alps and warming up around a traditional fish soup in a yurt when someone came in and yelled, “Northern lights!” Everybody rushed outside and sure enough, a thin green ribbon was starting to dance above the yurt. It developed into a swooshing green band that we watched (and tried to photograph) during an hour.

On the second occasion, we were coming back from dinner on the coast in Sommaroy when we spotted something shifty in the sky. It was the start of a much bigger aurora display and this one seemed to shoot up in the sky like green fireworks. It was quite impressive.

What I’m getting at is that there are tons of things you can do at night in Norway in winter that are fun and can be enjoyed while waiting for Northern Lights. It’s winter, after all. Thanks to the Gulf Stream, Tromso isn’t that cold but it’s still around freezing temperatures outside.

Here are a few things you can do while waiting Northern Lights:

Where To Stay in Tromso

We stayed at two different hotels in Tromso, at the beginning and end of our trip, and had two very different experiences. 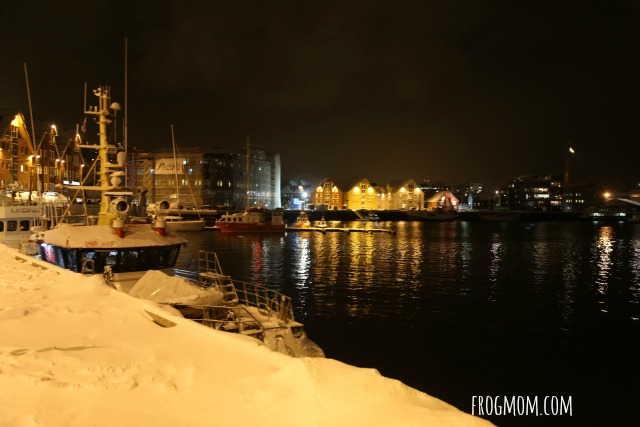 This is a really good modern hotel with a central location and the best buffet breakfast I’ve seen in Norway. Breakfast included fresh fruit juices, well-cooked eggs, cured meats and fishes with a good variety of breads. It was very clean and my girls, who were staying in an adjoining twin room by themselves, loved the view on the snowed-in harbor.

It was so central that we walked to the historic downtown to have dinner at Emmas Drømmekjøkken for an authentic Norwegian meal (don’t try the cod liver soup, it’s not for the faint-hearted). 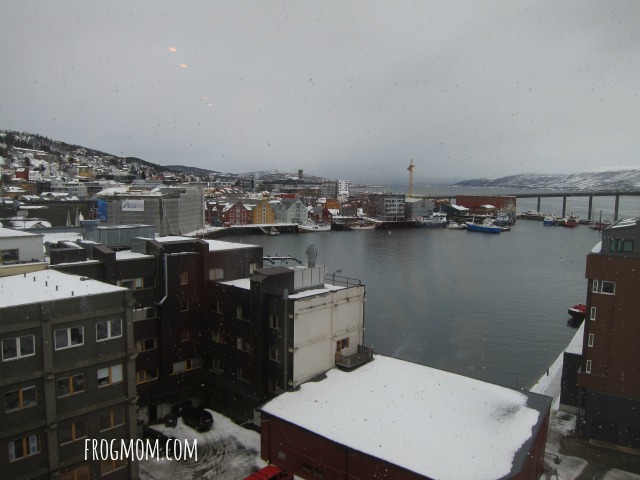 I wanted to love this hotel because it had such good reviews on Tripadvisor, but it was a surprising disappointment for such a global hotel chain. Its only redeeming factor was its central location, literally meters from the Scandic Hotel. The rest was bad. This is the view from our tiny bedroom for four, with cupboards so small that we couldn’t use them for storage and coat hangers weirdly placed above the minibar. Breakfast was very basic (very few fresh items) and based on our poor experience, I would recommend the Scandic Ishavshotel any day.

I hope that you will have a great time on your visit to Tromso and cross fingers that you will see Northern Lights in Norway. This was definitely a highlight of our family trip.