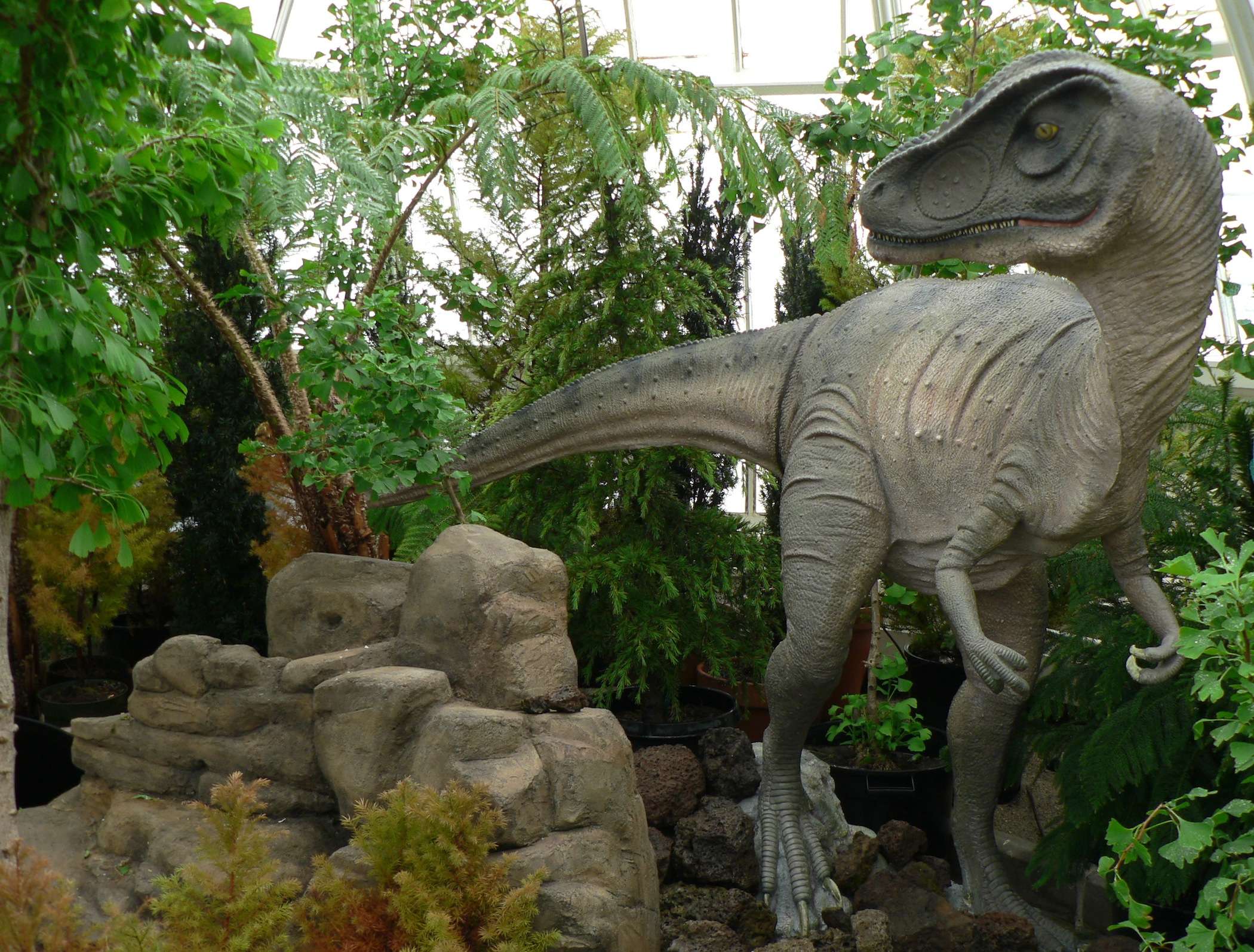 > Plantosaurus Rex at the Conservatory of Flowers

Plantosaurus Rex at the Conservatory of Flowers

Who hasn’t dreamed about seeing the land at the time of dinosaurs from a safe place? Marveling at the mighty giants roaming a plant and water planet? Hearing the roars, shrieks and flaps of creatures long extinct? Now I can’t promise you all that – wish I could – but the San Francisco Conservatory of Flowers’ exhibit Plantosaurus Rex can give you a glimpse into the lost world of dinosaurs and ancient plants. For this plant adventure, my girls were joined by the most perfect dinosaur expert we know: the 8-year old girl we’ve come to refer to as Amelia Dinosaur – the daughter of my fried Ronnie. Seriously, what 4th grader can name any dinosaur, produce a YouTube project on her local landscapes at the time of dinosaurs, and roar? You can see why she was the best companion we could have had.

To make a day of this exhibit, we planned it around a dim sum lunch at the South Sea Seafood Village in the Sunset where our girls could barely get their chopsticks out of the baskets and plates that kept arriving on our table. When they had had their fill and needed to shake the ants in their pants, we headed to the Golden Gate Park and parked right behind the Conservatory of Flowers.

On that sunny day, the white elegant greenhouse revealed its Victorian architectural splendor and yes, Earl Grey and tea cakes would have been quite proper thank you. But lo and behold – something unusual poked out from the roof on the western end. A dinosaur! Ah, I’ll say. Nothing like a T-Rex head breaking a building’s roof to get three girls running inside to check it out.

So our girls ran in and Ronnie and I decided to delay the pleasure of the exhibit by exploring the rest of the conservatory first. While our girls zipped through every single exhibit, Ronnie and I lingered in the Aquatic Plants room. We spent a lot of time observing the myriad hanging carnivorous plants, some of which had insects trapped at the bottom of their pitchers. By the time we had finished scrutinizing every single tropical orchid, fern and flytrap, our girls were already in Plantosaurus Rex territory.

As we opened the door of the exhibit, a loud roar welcomed us. The  T-Rex that went through the roof – it was alive! Ah well, almost. Sneaky kids just need to push a button and T-Rex will roar at will. If this were Disneyland, T-Rex would be an animatronix, scare the hell out of visitors and kids under age 6 would refuse to get into that room. But this is not Disneyland and the brochure of the Conservatory of Flowers is the bet way to go around the room.

We opened it and asked the girls to find every single plant listed for the various time periods – the Triassic, Jurassic and Cretaceous. While they did put some effort in identifying horsetails and giant ferns, their plant quest came to an end when they found the button that activates a fuming volcano at the end of the room. How many volcano eruptions are they responsible for? Quite a few I’d say. Then they ran to the other end of the room and next to a baby Stegosaurus, found the button that gets the Pterodactyl to shriek.

That’s when Amelia Dinosaur had an expert moment. She came to Ronnie and I – sitting on a bench – with a worried look. “Mom, pterodactyls don’t have teeth.” We turned our heads and gasped in muted horror – that pterodactyl did have teeth! Ah child, when this cruel world lets you down in critical moments, there’s only one thing to do – walk out and scream. Or go to the souvenir store and browse in silence. We chose the second option but did eventually walk out. I mean – we had seen the exhibit, it was time to see the sky.

Since the day was so nice, we let the girls play under a big tree while we enjoyed the sun on the lawn. Later in the afternoon, we were “invited” to visit the tree house of our three girls, complete with plant toys, bedrooms and a crappy broken lawn chair. What an excellent Plantosaurus Rex day!