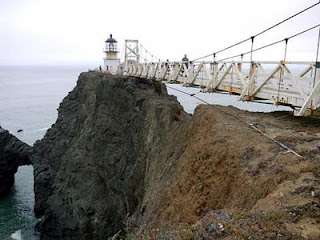 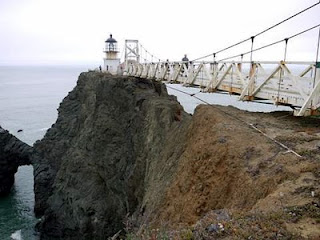 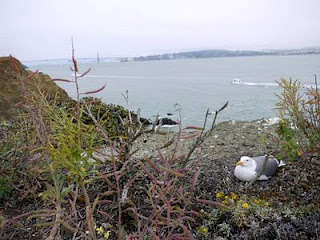 Though I had a difficult time deciphering the longhand writing on the reprint of the actual logs at the Marin Headlands Visitor Center, these tidbits provided a fascinating dive into the lighthouse’s history. Whitewashing, scouring, rescuing shipwrecked boats, living a normal family life.

When you visit it nowadays, the 1855 Point Bonita Lighthouse is a lonely white structure at the end of a suspension bridge with a vertiginous drop in the tormented ocean below and gorgeous views on the gate the lighthouse is keeping: the Golden Gate. Perched like an eagle’s nest, it commands 360 vistas of the treacherous waters entering the San Francisco Bay. Treacherous they were back in the days. Hazardous is a better word. During the Gold Rush years, more than 300 ships ran aground. 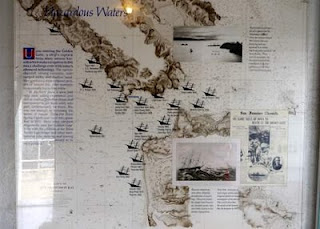 The daily log of the lighthouse keeper is a fair indication of how foggy the area was but walk inside the light house and you will find a map of major sunken ships hanging on the walls. With your finger you will be able to pinpoint vessels that lost their bearings in the San Franciscan fog and the shifting sand bars. Too bad the original lighthouse was 300 feet above water level, right in the fog layer! Fortunately, it was moved downwards (where it stands today) and a warning signal perfected. Over the years, the fog horn was successively a cannon wearning, a fog bell, a steam siren and an electric fog horn. 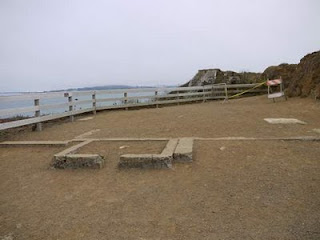 Today, this 30-seconds interval fog horn works with a laser beam that switches on based on humidity or dirt particles in the air. This results in the interesting paradox that you can hear the fog horn on an otherwise clear day if the air humidity or the dirt particles index are high. I wonder if this works the same with particles from wood fires burning in fireplaces in the winter. Intriguing.

When I visited the lighthouse, I noticed for the first time a little rectangular section of concrete on the ground at the entrance of the suspension bridge. It looks like nothing, really. Now imagine that it was the house of the lighthouse keeper’s assistant. Not much of a McMansion it seems. Barely enough space for more than a room, maybe two stories? I’ll have to ask the rangers. 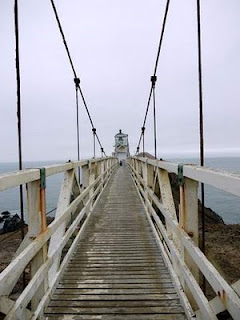 Well, these lucky fog dwellers had children, chickens, and a cat. How did they ensure that nobody pluged down the cliff? But of course, harnesses! Think the Victorian equivalent of the child leash, on every single creature on legs apart from adults. I was floored but then, looking at the drop, I understand their concerns.

Last item that caught my attention, the suspension bridge. I’m not going to re-write a treaty on suspension bridges but the docent who walked across with me (there’s a 2-person limit) insisted we walk side-by-side.

Funny, I thought that you had to break the step when walking on suspension bridges. As we walked and our aligned steps made the bridge swing upwards and downwards, I was reminded of the disastrous collapse of the Angers Bridge in 1850 and the frequency of bridges. We were perfectly in phase with the bridge’s frequency! Though I’ve been coming to Point Bonita for almost 8 years and I know the bridge to be perfectly safe, I was – for once – relieved to step on the other side on solid rock. Looking down at waves crashing on dark caves at sea level, I felt a shiver run across my shoulders. 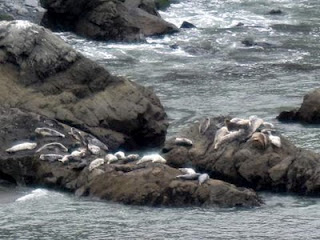 As I was walking back, discussing with the docents at the end their shifts, I snapped this photo of the sea lions napping the day away on the rocks next to the old rescue station. They may have disappeared from Fisherman’s Wharf, but I’ve always had good luck spotting the barking sea dogs here. When you go, look for them as you descend towards the rock tunnel.

So long Point Bonita, it’s been nice to see you again. Now that I know that the bridge is going to be rebuilt and the parking lot moved further, I’m excited to see what’s going to happen. I do hope the structure will preserve its historical appearance. It’s all the charm of the lighthouse for me. Plus the journal, of course.

Note: Point Bonita Lighthouse is only open for visits Saturdays, Sundays and Mondays from 12.30 to 3.30pm. Any later and you’ll find the gate of the tunnel closed. It would be a shame. The echo inside is a killer.