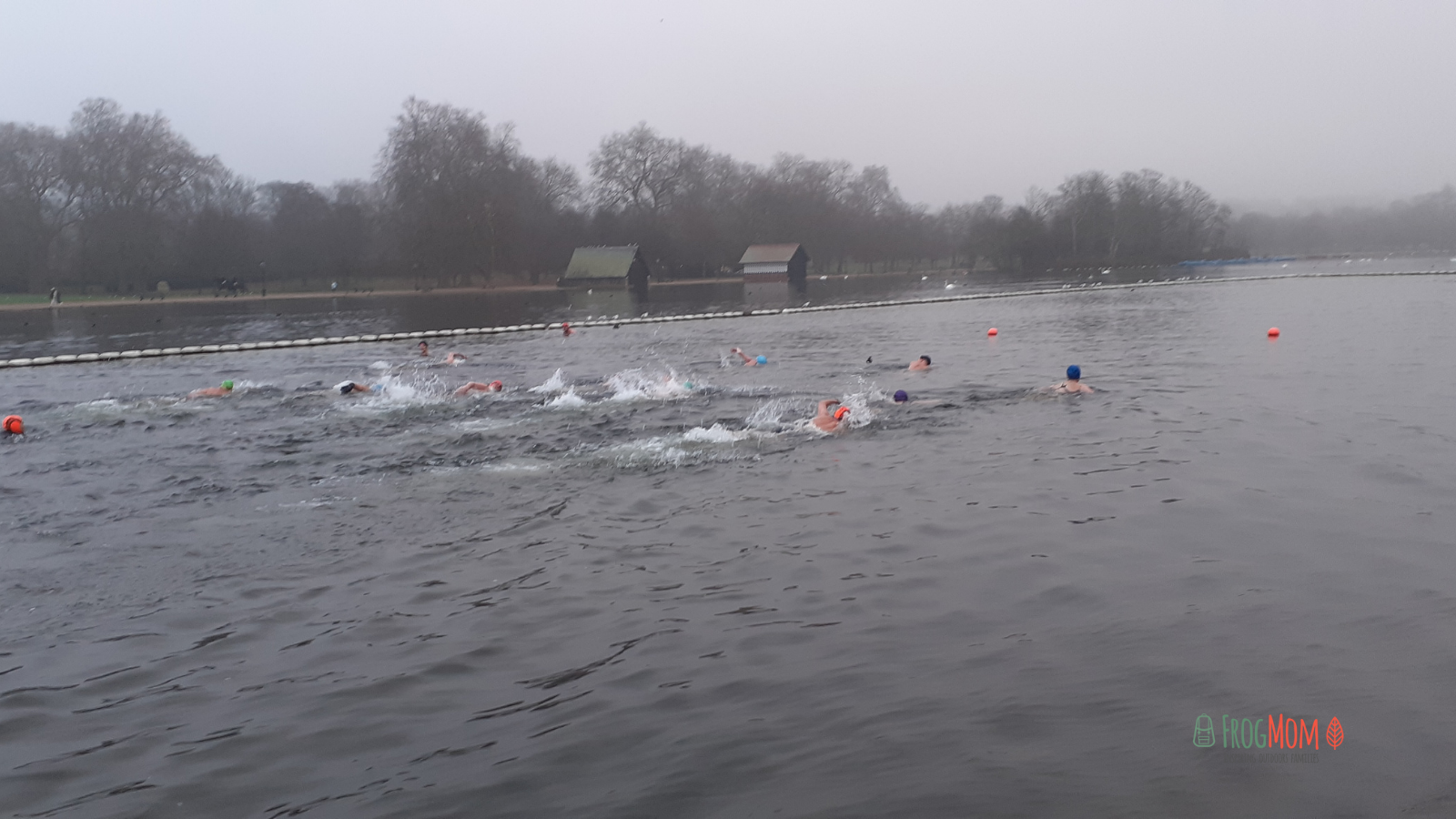 After sharing my Polar Bear Swim Challenge: December 2021 experience, I am back with 31 days of January 2022. January is a time of resolutions for everyone and for me, it’s the start of an extended Dry January that will last well into Spring.

Now, you may wonder what this has to do with swimming. Well, alcohol impacts my sleep and it also impacts how cold I feel in cold water, so cutting all alcohol should have made things easier. It definitely felt healthier, that was for sure. Given how fickle the human body is when it comes to adapting to its environment, it was no surprise to find out that how I reacted depended on more than one factor. Turned out lack of sleep adversely also impacted my reaction to cold water reaction.

The value of a good night’s sleep can never be underestimated. Read how January unfolded, from icy swims to cake and swimming ear plugs.

A word of caution

First swim of the year! Lovely seeing friends at the Serpentine. Almost swam into a swan. It was preening season, which meant that swans were everywhere fluffing their feathers and cleaning up shop before love season hit.

In the treats department, Charlotte made date balls (dates, biscuit, butter) that were quite delicious. Swam 100m f/c, 400m breaststroke with Elina. Topic of the day: earplugs. Nicola S was considering getting some and I tried my new Decathlon pair. They were so efficient that I was yelling to anybody within swimming range. They were also quite easy to pull out, which was a plus with cold clumsy fingers.

So warm for January. Today, Ilyan swam 1000m, Heather 900m, Ian 600m and Charlotte 400m. Overcast windy morning with big clouds. Bicycles were parked everywhere on every inch of metal fence. Lots of lovely swimmers, plenty under the trees. Some were walking a length, others were dashing a width and getting out. Most were doing heads-up breaststroke social swims. Water felt good.

I went in with 600m as a goal, taking the outer route to avoid breaststrokers and pile in more meters. Strategy worked. Took an hour to warm up. Toes still cold an hour later but chest feels fine, head not woozy (was for a bit on the bike). Gradually thawed at home in comfy slippers with cup of tea.

And just like that… we were back in more familiar January water temperature territory. I continued past the 40-yard buoys in the first race of the Mike Small cup, to the end and back. Came in second behind Debs. Nick A said my right arm didn’t enter the water at the right angle and it would hurt my shoulder in the long run. Left arm was OK, so there was that. Shoulder has been hurting for the past two years. Need to fix my technique.

Ice swimming water temps. Swam 200m heads up breaststroke with wool hat on. Felt like looking at the world in a spot of sunlight. In hindsight, the sunlight was kind of misleading as my brain told me it should be hot and it may be slightly warmer, but it wasn’t warm at all. All very confusing on the brain.

Swimming in the dark before dawn. It was literally impossible to see the line of buoys at the other end so when I bumped into them with my hand, it was a welcome surprise. As in, oh, is that the end? Can I turn around now?

As dark as the water was, I had an eerie experience passing the pale neon white limbs of a swimmer underwater, which proved that the water clarity was actually quite good. Nick H had just swam 1K and found it colder than usual. Was it the dampness in the air? It rained last night.

As I came in, heard the voices of Caroline K and her friend Cath discussing their latest read among the reeds. Surreal as I couldn’t see them at all.

And another cold swim.

Afterdrop, hypothermia, and lack of sleep.

Fingers felt like swollen spatulas in the water. Was lovely swimming back towards the bridge with the Wolf Moon in the sky above the winter tree line. Once in the changing room, I felt woozy. I managed to get upper body dressed, but had to sit down as the changing room was spinning. Surprised that I was feeling the afterdrop hard and… opened my eyes when somebody shook my shoulder and asked if I was alright. Apparently I passed out a few seconds. Everybody sprung into action. That’s the beauty of having experienced swimmers in the club, eh? Tom E got me a hot water bottle. Katie BH and Will D tried to put socks on my feet to dress me up but my socks were too small and my big toe kept getting jammed in the tight weave. Fortunately, I bounced back quickly and took over sock duty. Note to self: no tight socks in winter.

My race mark was 33s. Nicola S had 35s. After 2 weeks of finishing second behind her in the Mike Small series, I finally beat her but 3 or 4 faster swimmers to our left also beat us anyway. Just my luck. Some people didn’t feel like swimming back. Can’t blame them. Water was brrrr cold. So glad I had my flip flops. They may be ugly but they are toe saviours.

After the races, an impromptu bike repair workshop was et up on the “beach” as Poppy B showed up with a puncture. Unsurprisingly, Rob O had a spare inner tube and Simone had a spanner. Stu felt confident in Rob O’s skills, held the wheel and checked the rim for sharp objects. No easy feat. During Poppy’s swim, the bike was repaired. Well done, team! Also.

The boiler has been connected in the changing room. Features a big note: “Do not use. Tank not flushed.” Think I’ll stick to the thermos for a while, but I’ll soon return the Serps mugs.

“It’s at 2.7C!” announced a woman in the changing room. In fact, it was 3.9C. A woman sported a beautiful Bella Freud wool dress and track bottoms that she bought at a sample sale. It was so gorgeous and looked warm too. Another member showed off her new Terra-something winter coat, with double-ended zipper (handy for cycling) and tons of pockets. It was yellow too, a great colour.

Stanley U discussed his latest podcast on Thames Water dumping raw sewage in the Thames over 11 days in Christmas. What’s the best solution to stop sewage being dumped into waterways? Stanley believes the pressure should come from lawmakers. The problem is that lawmakers are not enforcing existing laws, so what is the point? I suggest that the pressure should come from money – either from shareholders voting at meetings or from investors divesting.

Cycled through the cemetery in the dark which was a first. Only two people in the changing room (Phil S, a woman who became a member last year and wears a neoprene-like cossie from Finisterre), a handful outside. Robin’s thermometer showed 4.5C, which seemed a lot warmer than what we all felt. Water was clear. I thought I was going to do 100m heads-up breaststroke but ended up doing 200m front crawl.

Towards the end of my swim, a group of people was congregating at the end of the beach area. I went to check that they were members and was surprised to find them all in a circle listening to a man telling them how to breathe and relax. Watched them get in the water in a long line before regrouping as a circle.

Strange and nice to see people making the Serpentine their own differently. Bumped into Saul, Adam and Melissa at the end. And Rob O, who has perfected the art of talking as long as possible to delay an icy swim.

Robin’s thermometer showed 5C, which none of the swimmers believed to be true. “It’s freezing” was the common reaction. Very few swimmers around 7.30am, both in and out of the changing room. Robin discussed with parents of professional divers in the changing room and found out that this discipline commonly comes with back injuries. Their daughters train with weights. Apparently some teams train differently to straighten back muscles – the trainer climbs on the back of divers. Different methods.

Adam demonstrated a perfect dive followed by 25m dolphin kick under water. Not for everyone, but beautiful to watch. Gloomy skies. Green tea in flask.

Short dip in Windermere with two ducks (Choco and Coco) by the Lake District Visitor Centre. Left my stuff by the roots of a tree and walked directly into the lake from a small cove. Rocky around the edges and shallow for 15m, then dropped all of a sudden. No wind, Storm Malik was already on its way to Norway.

Happy Lunar New Year, water tigers, you. So much wind! No white caps but definitely much faster one way than the other. Very few swimmers. Met new member Jonas. Comes from Denmark where he swam in the sea. Seemed completely unfazed by the temperature and went right in.

Adding up all my December swims, I swam 3114m and just about checked my 3K goal. February is probably going to be harder as it’s a short month. No leap year this year.