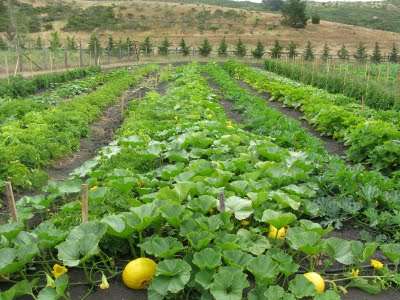 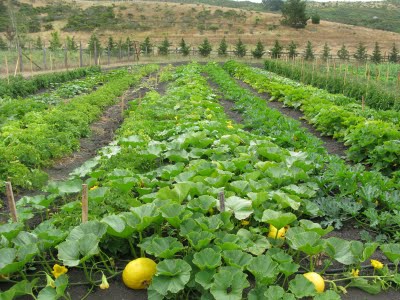 Potrero Nuevo Farm is a newcomer in Half Moon Bay’s agricultural landscape. Not even two years old, it has already accomplished a lot and promises lots more in the field of sustainable farming and living. An offspring of the Potrero Nuevo Fund, a foundation that supports community based organizations, the farm is a slice of heaven.

Set in Half Moon Bay amidst rolling hills on Tunitas Creek Road, a winding paved road popular with bicycle riders, the farm could be a model farm. Thanks to GreenMoms.com, we joined a private tour by coowner Bill Laven, Vida Verde co-founder Shawn Sears and Suzie who works on the farm. While GreenMoms events always have an (obvious) environmental slant, this one was exceptional both in choice and inspiration. 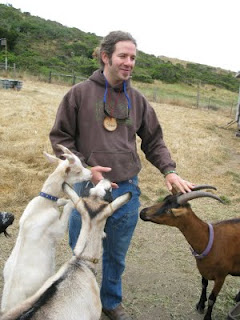 tting. “The walls are insulated with blue jeans,” he said, “and the roof with soy products. The roof is also covered with solar panels that SolarCity installed. In addition, the farm is hoping to set up a gutter and storage tank system that will make it possible to collect rainwater to irrigate the fields.” Right at the outset, we were impressed. Bill is a former teacher and took the time to learn the children’s names before asking them questions – a nice plus for a family-friendly organization. Out of the barn, we crossed the road and headed up the hill to milk a goat.

Shawn led the way. He leads Viva Verde trips, environmental education programs for Bay Area 4th to 6th graders. Kids come, one class at a time for three days, and do stuff they don’t do at home – such as sleep in teepees, milk goats, make fresh cheese, work on the farm or hike in coastal redwoods.

Our group got to pet the goats, learn how to make a teat with our fingers (to practice) and t 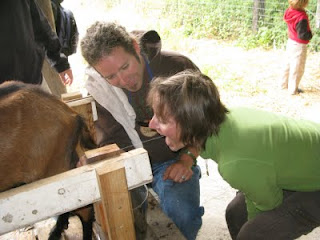 hen milk a goat aptly named Squirt. Once we (more or less) understood how to make the A-OK sign with thumb and pointer to squeeze it down, we volunteered, children first, to fill the pail with warm goat milk. Slightly anxious in front of so many strangers, Squirt was eating a bucket of her favorite cereal. Each child took a turn, at first timidly and then with authority, while Squirt patiently withstood our milking trials. Adults followed, either intrigued or plain eager to see how it felt. Shawn caught us off guard when he asked around if anybody wanted a qu 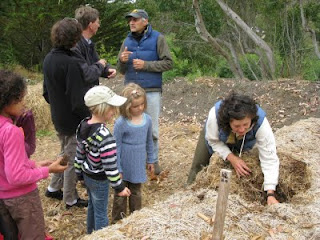 ick taste …. right off the tits! Giggles in the audience as Shawn began his targeting exercise, aiming directly at the drinkers’ wide-open mouths. This was no easy task but clearly, he’d done it before. I tried and enjoyed the warm milk. It didn’t have that strong goaty flavor but rather was mild and creamy.

We left the animal world to explore the vegetable world, led by Bill and Susan. We stopped first in front of three neat piles of compost. I’d always wanted to compost at home but never really knew how. As Bill and Susan explained the ins and outs, composting became very concrete. The key words are: greens to bring nitrogen ( 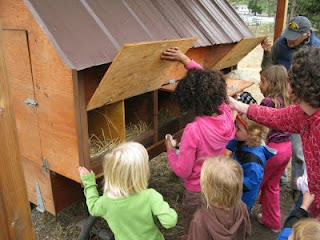 carrots, greens, peas…), brown to bring carbon (hay, wood shavings…), water and air. Arrange in layers, let it sit and turn over every other week, making sure the stack remains moist. If you have a farm or stables nearby, you can ask for horse manure to mix to the compost pile. When piles are active, they reach an impressive 140 to 160 degrees F. The children gathered around Susan who was scooping out two handfuls of compost from the middle of the pile to show how warm it was. “Are there any worms in there?” asked a little girl, hopeful. Unfortunately, the worms were busy at work – way down below. However the handfuls 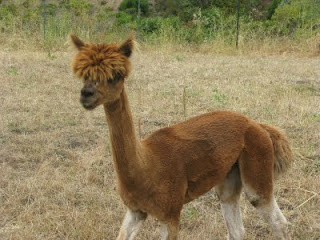 were warm and smelled like … dirt – a pleasant surprise for everybody.

Our next stop was the alpacas and the chicken coop. Susan let the children lift the wooden doors of the chicken coop and browse through the straw to find warm eggs laid in the morning. How glorious the children looked with each a fresh egg in their hands, holding their prized possessions like they’d never seen an egg before. Meanwhile, the alpacas (recently shaven therefore looking like awkward fluffy pets) paced around. Still holding their egg, the childen each grabbed a handful of chicken feed and threw it on the floor. You’d think these chickens had been starved a week. They flocke 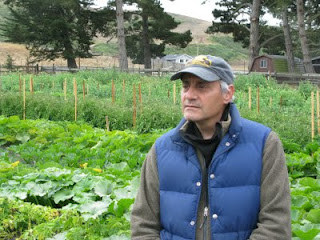 d to the feed spots, avidly pecking whatever they could eat. Out of seven chickens, there were four different varieties: Japanese Bantam, Cochin, Araucana and Brahma. One of them produces an egg with light blue hues, a true beauty.

We moved to the “production field,” the vegetable garden where 26 different crops grow year round. Susan pointed to early girl tomato plants. “We’re trying dry farming on those,” she said. Dry farming combines water savings with sustainable agriculture. By drastically reducing irrigation, you encourage the plant roots to go very deep to get to the wat 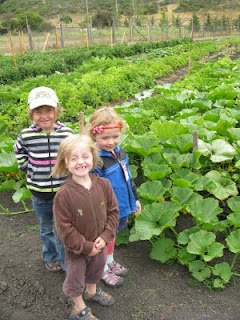 er table. “Not all types of soil are appropriate for this,” added Bill, “you need a soil that retains moisture such as clay.” If you live on stony soils, they might allow too much drainage for this type of farming but the idea to force plants to become self-sufficient for their water needs is fascinating.

“We need a few children to help harvest the lettuce plants!” said Susan, holding a cardboard box. Young volunteers eagerly followed her steps and with some grown-up guidance, neatly cut greens to put in the box. Meanwhile, I asked Bill what they did with all these vegeables. Surely, they sold them at the farmers market? Actually, they just started attending the Half Moon Bay Farmers Market three weeks ago but they only sell a portion there. The rest is donated to the Catholic Worker House for their soup kitchen, so that low-income families can enjoy farm fresh produce in their meals.

There are two last items that are noteworthy when 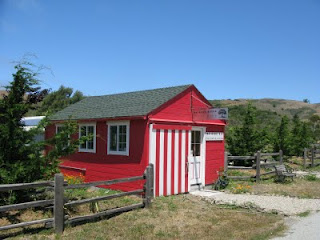 you go to Potrero Nuevo Farm. The first one you see from the road and it’s called The Bike Hut. It’s a bright red former-garage-turned-small-barn where bicycle riders can stop to make a hot drink and rest. It’s open 24/7 and relies on an honor system. There’s a suggested donation for tea and coffee, plus picnic tables outside and the opportunity to refill your water bottle.

The second item is much more intriguing. It’s an outhouse; not a regular outhouse though, a humanure toilet. In line with the farm’s philosophy, it makes “humanure” out of you guessed what. Go on, don’t be shy. Step inside and try it out. The inside has a gorgeous round window with 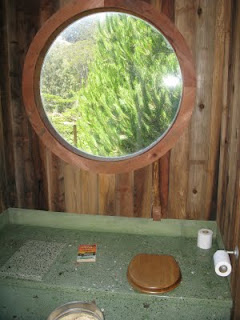 a view on the hills, as well as a marble-like cement platform made with sea shells collected on the beach. Once you’re done, scoop out a cup of wood chips, drop in toilet, close lid and take a whiff. Smell anything? No, there’s nothing unpleasant here. It’s actually surprisingly odor-free. The outhouse has two sides that are used every other year. After a year of sitting dry, you get humanure and believe it or not, it’s safe to use as fertilizer in California farming. Not that it will be done at Potrero Nuevo Farm (Bill told me they wouldn’t use it on vegetable beds not to gross out customers), but hey, it’s a great dinner topic regardless. If you want to try a humanure toilet at home, check out this milk crate version. People will always remember you.

As for Potrero Nuevo Farm, you can meet these great folks by going to the Half Moon Bay Farmers Market, calling to farm to arrange a tour, or by keeping an eye on the website or Facebook page as a CSA might be in the plans. You can also join GreenMoms and participate in similar events by signing up here.