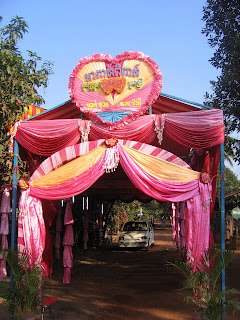 > Prayang and Chai Manee Get Married

Prayang and Chai Manee Get Married 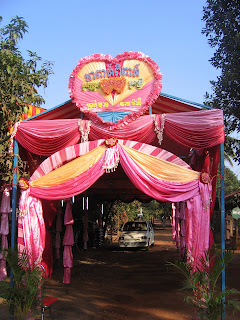 Prayang and Chai Manee got married on March 13, 2008. Each time we learn about a wedding in the village, it’s because they come in two versions: loud and louder. We live a block away and yet there was no doubt from early morning on the day before. Music blaring out powerful loudspeakers was a giveaway. Sitting by the pool under the plumeria (or frangipani) trees, I listened to the Khmer and Chinese melodies. Around mid-morning, I thought to myself that I rather liked one of them. It sounded famliar too. That was until I realized it was the Khmer rendition of Sonny and Cher’s “I Got You Babe”! There was no sign of the music dying down any time soon so I candidly asked around if I could go attend the wedding. After all, we’re neighbors. By mid-afternoon, I packed my camera, videocamera and an enveloppe with a donation for the bride’s parents.
As I walked to the house, I expected to find hundreds of people mingling on the street and getting out of pick up trucks. Not so. The place was empty. Empty chairs sitting around empty tables. The wedding was not due til the following day so they were setting up. The morning music was merely rehearsing the following day’s program. However, I was directed to the upstairs and only room of the wooden house. As I arrived on the landing of the stairs, I realized that the bride and groom were in the middle of a blessing with four monks and an officiant. I felt embarassed but I was ushered inside before I could back down. Show time. 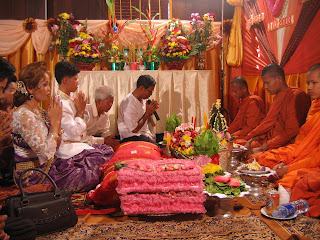 A loud whisper followed my entry and all heads turned to me. More reason to be embarassed. On the front row, nobody had noticed me yet and the ceremony was going on without interruption. I knelt on the ground when a little old lady shoved someone else aside to make room for me. Her wide grin showed years of betelnut chewing, the scary-looking bloody gums with yellow teeth. Several old ladies around me also belonged to the betelnut club. They were wearing the traditional sarong with a silk scarf wrapped around the shoulders. In the far right corner of the room, a reduced television crew was bliding us with lights and recording the ceremony. To my further embarassment, the camera stayed a long time on me. I put up my best behavior, hands joined in a high wai and legs to the side, peeking over people’s shoulders to figure out what was going on.
I must have peeked too hard because all of a sudden, I was gently pushed 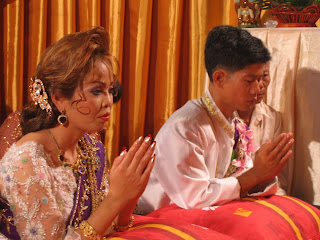 to the front of the scene with the cameraman. I smiled to the bride and groom and the bride smiled back after a few (long) seconds of “what the heck?”. Sitting underneath the lights I felt sweat dripping down my back and felt for the bride and groom.

They were both wearing a purple and gold jonkrabeng with white long-sleeved tops and lots of shiny jewelry from waist to head. If not for the occasional head bending to receive the monks blessings, these two were as lively as wax figures, as tradition demands.

Since I was so close to the ceremony, I began taking pi 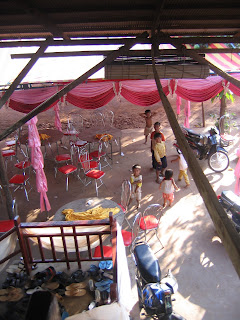 ctures and filming the scene. There was nowhere for me to hide so I might as well take advantage of the location.

I tried to understand what the objects in front of me were but with no knowledge of the Khmer language and hardly any of their customs, it was a big guessing game derived from my Thai experiences. The one thing that struck me was that objects, candles, offerings came in pairs whereas in Thailand they would have been counted in odd numbers for good luck. In front of me, two bright pink rectangular boxes. I couldn’t help wonder. I was told later they included costumes for the bride and groom.

My phone rang and I left it at that. Upon leaving, I went to pay my respects to the parents of the bride and handed over my donation. Wide grin. At least on that point, I’d done the right thing. Downstairs, village children were playing amongst the empty tables.