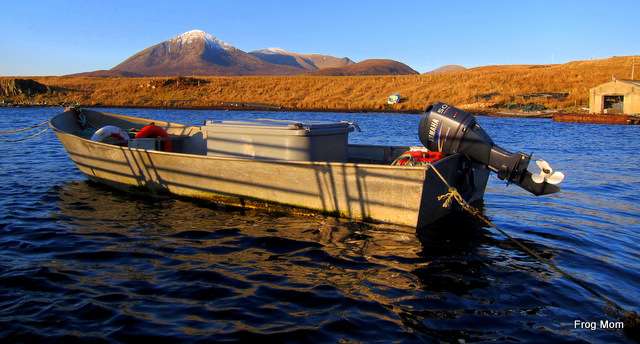 > Private Island Family Escape on the Isle of Scalpay

Private Island Family Escape on the Isle of Scalpay

You don’t have to be rich and famous to spend your next family vacation on a private island, longing for peace and quiet in the middle of the ocean. With 14 miles of shoreline, the Isle of Scalpay in Scotland counts only two guest cottages that you can book for week-long stays. It’s you and a hundred sheep on 200 acres of wild moor and ancient hills. You want to put your feet up and watch clouds drift by? Let the kids run outside and collect seashells? No problem, this is as secluded as vacations come.

After we discovered the Isle of Scalpay researching family holidays on the Isle of Skye, we were lucky to spend a few days and explore this little-known gem with my girls (7 and 9), my dad and my husband. What we discovered when we set foot on the island was bigger that what we expected. When you hear people speak of unchartered territory, you think of the Wild West or darkest Peru. Scalpay was partially that. Because it’s so close to cities on the Isle of Skye, you can easily escape from your island escape for some Scottish city fun. However we preferred staying on the island and discovering hills where we were free to roam around and spot sea eagles.

The Isle of Scalpay is so off the beaten track that you won’t even need your car once you’re there. There are no roads anyway, only a four-mile track that connects the harbor to a remote cottage. Once you park your car on the Isle of Skye after Broadford on a parking area, a boat will come to pick you and your kids up. You’ll be happy to secure your luggage in a waterproof box because just so you know, you might get splashed during the boat ride! Sure it’d be tempting to swim across but a boat’s best to cross the half kilometer that separates Scalpay from the Isle of Skye at high tide.

Our most memorable experience was a through-island hike to a Viking village, a real adventure that kept us busy navigating pure wilderness during a whole day to find the ruins of a Viking village on the coast opposite from the harbor. Our excursion included a lunch stop in a cute hut by a loch on top of the island, looking at waterfalls from a hill overlooking the ocean, walking on a sandy beach by a loch, and spotting sea caves and seashells by the coast. Plus walking house to house in what remains of the Viking village – pretty cool stuff. (Note you can also visit the Viking village by boat.)

Along our hike to the Viking village, we startled four red grouse in the heather moorland of the island’s hills. Alarmed by our loud voices, these beautiful birds took off in a flurry and went into a long glide to disappear far from us. As they rocketed upwards, they made funny sounds. We also spotted two red deer on the hills who scampered away as soon as we saw them grazing on a hillside. By the harbor, hundreds of blue mussels clung steadily to the floating dock at water level. With our binoculars, we spotted a lone sea eagle coming out of a forested area and over the hills but the bird was so high that we didn’t see much details. We hear that the nearby islands and coves accessible by boat are great spots for colonies of seals and schools of dolphins. I’m not going to include sheep in wildlife but since they’re the first animals we saw on Scalpay and as they look so very fluffy and decorative on the grassy slopes, I’m going to mention them anyway.

Budding archaeologists to the rescue! On the hill right above the harbor, we respectfully walked through an ancient burial ground where modern graves share a peaceful meadow and the shade of a tree with the ruins of Temple of St. Francis (known as Teampull Fraing, or Teampull Frangaia) and a historical grave slab. The history of the island indicates that the original Celtic inhabitants were converted to Christianity by St. Columba in the 6th century and though the island is home to only two people today, there’s evidence 200 to 300 farmers lived on it at a time. If you look closely, you’ll find a narrow tall slab engraved with a cross and another slab with the capital letters P M A. Who knows who they were for? In the middle of the fenced-in burial ground, a jumble of stones indicates the footprint of the former temple. For creative kids, this place would be a perfect spot to sketch to illustrate and write a ghost story. What’s a Scottish vacation without ghosts anyway?

I think the part that my girls liked the best was having down time in the evening and being able to play board games or read books at will in their bedroom. Without iPads or TV to transfix them into a hypnotic stance, they enjoyed relaxing play time and when dinner was ready, reluctantly left their hideout to join us at the table. Had the weather been warmer when we visited – dang everlasting winter – I know they would have loved exploring the woods and shore next to the house.

What else to do while on an island? You can’t really ride bikes and you certainly can’t drive a car. Boats are the only vehicles to go around and a fun way to go around at that, even if my girls protested when we told them they had to put on kid-sized life-jackets. “It’s the life-jackets or you stay!” Of course they put them on while grumbling and forgot all about it once they were aboard. By the time the engine went full throttle and split the blue sea with a foamy wake, they were laughing out loud sitting at the back of the boat next to the engine. You’ve never seen bigger smiles. A short ride on an open speedboat is definitely more fun than a ride on a ferry sitting in your car – I’ve got proof!

You can take part in various types of boat trips once on Scalpay.

Obviously since you have the island to yourself, you could picnic anywhere you want but here a few suggestions to inspire al fresco excursions:

– The hut by Loch a’ Mhuilinn

While foraging and farming feed the residents of the island, guests stock up on food before arriving on Scalpay. Here is your chance to plan a week’s worth of nutritional family menus and stick to them! Or you can go River Cottage on the kids and catch tonight’s fish if you feel so inclined – that’s an option too. Just know there’s no food store on Scalpay so you’ll have to get organized.

The Isle of Scalpay features two holiday cottages available for week-long rentals. Check the website for details on the Garden Holiday Cottage or the Keepers Holiday Cottage. Once you put away your luggage and make yourself at home, don’t be surprised if the kids are lulled to sleep by the sound of waves in the evening. It’s pretty much the only sound you’ll hear apart from wind in the trees aand tweeting birds in the morning.

Disclaimer: I want to thank the owners of the Isle of Scalpay for inviting my family and I for a super comfortable and friendly stay on their beautiful island. It was our first stay on a private island and we’re amazed at all the work and efforts they put into beautifying the island and planting new trees. My girls had a blast away from all electronics and honestly, all holidays should have some of that. The opinions expressed on Frog Mom reflect my true opinions regarding our stay.