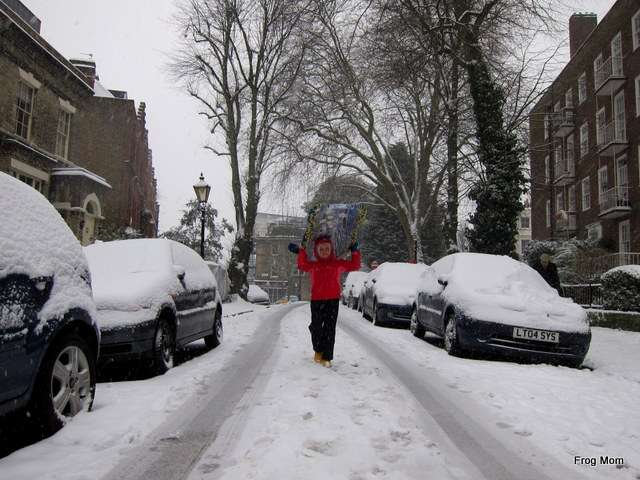 > Quiet and Rowdy Snow in London

Quiet and Rowdy Snow in London

Snow in London is quiet. Quiet like almost no cars on the streets because it’s snowy-slippery. Quiet like muffled footsteps and low volume conversations on snowy sidewalks. Quiet like Dickens’ London where “it was cold, bleak, biting weather; foggy withal.” That kind of quiet. It’s also crazy rowdy like hundreds of people laughing so hard on a hill you hear them like a rumble from the surrounding hills. Rowdy like normal civil humans suddenly breaking into savage snowball fights and chasing each other around trees. Rowdy like sliding down hills on kitchen trays. That kind of rowdy.

On a cold Sunday when snowflakes descended in fat lumps from low grey clouds, our family suited up in winter gear to go sledding at Hampstead Heath. For one whole and joyful afternoon, it felt like a ski break except we took the Tube to and from our winter wonderland. How cool is that? (No pun intended.)

Getting out of the Tube at Hampstead, we immediately took to small pedestrian streets where I suspected snow would be fluffy and plentiful. Oh how I was right! Lamp posts, brick walls, garden trees – white and getting whiter. As a bonus, these tiny streets offered gentle slopes (urban grade) to dust off our sledding skills. Whoosh! went the sled with our two girls at the helm, snow shy at first. Good thing the slopes were easy as we did stumble into a couple people around a corner. Our girls balanced their weight this way and that way to guide their sled to snow bliss.

Once on a main street, we heard wild laughter ahead: snowball fights! Like yawns in a classroom or sneezes on a lift, snowball fights are extremely contagious. Duck! Like in the movie Elf, kids – and would-be kids – have this irrepressible urge to make snowballs and throw them at your face just because you’re not paying attention. I should’ve known better – and I did retaliate in kind below head-level because I’m a fair snowball fighter.

Once we got the snowball devil out of our system, we entered Hampstead Heath. Before the snow, I barely knew my way round this north London park criss-crossed by larger and smaller paths. With a few inches of snow, I was lost! But no matter, we just followed people wherever they went, looking for the ones that slugged sleds and children. If anybody knew the right spots, these were the ones.

I still have no idea where we went but I keep a few striking images of our snow journey. A bald snowy hilltop with a single winter tree. A snowman with carrot peel features. A low-lying tree branch on which to hang out. Strollers and bicycles on the snow. A tree trunk made out of snow. A snow rabbit and snow people on park benches. A true-to-book Winnie the Pooh snow bear.

And then the Parliament Hill craze.

Since we had no clue what we were doing, we asked a group of sledders where the highest hill was. “Parliament Hill!” they said, pointing straight, then across the road, then right, then ask your way again. This we did. We followed their directions and we knew we’d reached the right spot just by the sound. It was a loud roar of conversations mixed with high-pitched shrieks, more laughter and yells. Hundreds, literally hundreds of people on a crest in front of us. Facing them – a long chaotic slope where every would-be sledder took a turn on various vessels.

We had a regular sled but others were way more creative. Here are a few alternatives we saw: garbage can lids, oven trays, shovels, plastic trays, garbage bags, snowboards, flattened cardboard boxes, a sleigh made out of a wooden box nailed on two skis and the most creative by far – a kayak boat whose intrepid occupants used the oars to slow down the hill! Crikey, it was a chill sight.

My 7-year old was way too light to be able to steer the sled over hundreds of yards and through people walking everywhere so my husband and I took turns going down with her. It was awesome! The slushy mud ending wasn’t as fun but the going down was smooth and furiously fast. Inevitably I had to use both my shoes to slow down. How did nobody get killed by a sled that day? I seriously don’t know. I swear, it was all so organic and uncoordinated that instead of making their way up on the sides to avoid incoming sled traffic, most people walked up the way they came down. In city clothes, long wool coats and leather boots or sneakers. Crazy!

Before we went home, we still needed  to check two items off our snow day list – a snowman and hot chocolate. Snowman was easy peasy – 25 minutes of shaping, 2 branches for arms and twigs for eyes. We gave it my black umbrella and a headlamp and it looked OK. Hot chocolate was delicious. We stopped at Euphorium Bakery where we stocked up on artisan breads (yum, the muesli bread for breakfast) and ate delicious lemon and chocolate tarts with our hot chocolates.