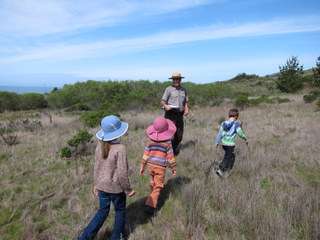 How are Ocean View Farms, Marylin Monroe and a forest troll connected? You will find the answer at Rancho Corral de Tierra, a 4,000-acre undeveloped plot of land in El Granada, a 2011 addition to the Golden Gate National Recreation Area. On a sunny Saturday morning in March 2011, we joined two families on this 2-mile walk through coastal hills and farming history entitled “Rancho Corral de Tierra: A Short Walk Through a Long Story.” Though the Artichoke Wars is not your everyday bedtime story, the kids had fun learning about artichokes, native plants and even petted a horse on this hike led by park ranger George Durgerian.

We met at the end of Le Conte Avenue and hit the trails. A couple hundred yards into coastal meadows, Ranger George stopped and told us about the farming history of the land. Formerly grazing ground for the cattle of Mission Dolores, Rancho Corral de Tierra got its name “earthen corral” in a Mexican land grant in 1839. The name referred to the fact that the shape of the rancho formed a natural enclosure for cattle. Back then, the rancho encompassed more than 7,000 acres stretching from Montara to Half Moon Bay. With hills swarming with grizzly bears and mountain lions, the area was virtually inhabited.

Now, imagine 1839 California for a second. The Spanish mission system had been dismantled, the Russians occupied the north coast, the United States were preparing for war with Mexico. San Francisco was a risky place to be and that was where Jose Tiburcio Vasquez and Francisco Guerrero lived, having served the Mexican Californian interests.

Unsure about San Francisco’s future, both men looked for a safe place to live and thought of the coastal hills south of the city. As the former supervisor of Mission Dolores’ livestock at the Corral de Tierra, then stretching from Montara to Half Moon Bay, Vasquez knew the secret route into isolated Half Moon Bay. Both men applied for a land grant as reward for their services.

The governor of San Francisco granted the southern part of Corral de Tierra to Vasquez and the northern part to his friend Francisco Guerrero. Neither man enjoyed their rancho very long as they were both murdered – Guerrero in 1850 at the corner of Mission and 12th Street in San Francisco, Velasquez in 1863 sitting in a Half Moon Bay saloon.

After this roaring start, we progressed through the chaparral following an unofficial trail. Indeed, Corral de Tierra is in the process of being developed, which means that it has neither trails nor facilities, neither brochure nor parking lot. When you go there, you will find a few trails created by passing horses or wandering locals, but nothing official.

Ranger George decided to grab the kids attention by showing them local plants. Douglas Irises were starting to bloom, California poppies too, and the kids got to meet the common mallow, as in “marsh mallow”. Yes! But wait. The current marshmallow in stores doesn’t include sap from this plant – it’s all sugar and chemicals you know. However in Ancient Egypt, the sap of the mallow plant was boiled and reduced to a paste sweetened with honey to form a cough drop. Fun, hey?

Next to the mallow flower were carpets of yarrow, a plant with strong medicinal properties. Actually, legend has it that yarrow (Achillea millefolium) was named after Achilles, the Greek mythical figure who used it to stop the bleeding wounds of his soldiers.

We continued our way, crossed a wide service road, walked under rows of tall eucalyptus trees, and arrived at a horse ranch. That got us a gleeful smile from the kids. “Can we pet them?” they asked

Ranger George. With the prior agreement of the ranch’s owner, Ranger George let the kids gently stroke the nose of the horse that was closest to us. If you go there without a guide, ask the owner if it’s OK to do so. It’s always a safe precaution with big animals and the ranch is private property so you’re only technically “invited” to walk through the corrals.

Heading north after the stables, we got on a bridge above Martini Creek and that’s where we found the forest troll. Look for it on the eastern side of the bridge. There’s a geocache on the bridge if you hike with a geocaching device. As the saying goes, touch the troll and get good luck!

We turned around and retraced our steps to a promontory right over the white fence that encircles Ocean View Farms. This is where you learn about the Marylin Monroe connection. You may or may not know it, but Marylin Monroe was crowned Miss California Artichoke Queen in 1947. As it turns out, Rancho Corral de Tierra was planted exclusively in artichokes in the 1920s.

Back then, Ciro Terranova “Whitey” (1889-1938), a member of the mafia and known as the “Artichoke King,” began his monopoly of the artichoke market by purchasing all the produce shipped to New York from California at $6 a crate. He created a produce company and resold the artichokes at 30 to 40 percent profit. Not only did he terrorize distributors and produce merchants, he even launched an attack on the artichoke fields from Montara to Pescadero, hacking down the plants with machetes in the dead of night. Yes, artichoke organized crime at its meanest.

The Artichoke Wars led the Mayor or New York, Fiorello La Guardia, to declare “the sale, display, and possession” of artichokes in New York illegal in 1935. Thus fell the Artichoke King. Honestly, who knew there ever was an artichoke mafia on the San Mateo coast? Weirder than Prohibition I say. Ironically, the San Mateo county is still a big producer of artichokes.

This pretty much closed our exploration of Rancho Corral de Tierra, a surprisingly m ysterious slice of coastal land. Just head there fast enough and you may see this without the crowds – to best enjoy  the trolls and the ghosts of Spanish rancheros and artichoke thieves.

One thought on “Rancho Corral de Tierra: A Short Walk Through a Long Story”