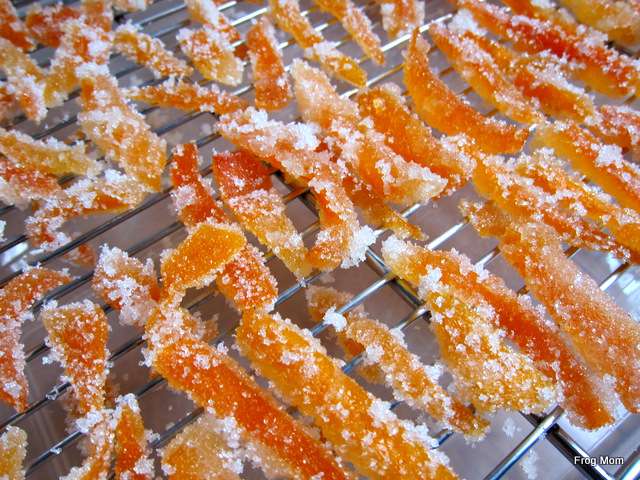 The first time I tasted one of these babies was at Chez Panisse in Berkeley. It was heaven. Tangy and sweet, between jelly and fruit leather, the candied grapefruit peels were the perfect ending to a fine dinner with a cup of hot mint tea. I asked for seconds right away but you know how seconds are – sometimes they aren’t enough and you can’t ask for thirds. I had to have more! I opened up the Chez Panisse Desserts cookbook I have in my kitchen and browsed the index. There, Candied Citrus Peel, recipe on pages 64-65. The recipe was so simple that I had to try it. Worse came to worse, I would have lost the peel of two grapefruits. Big deal. Since grapefruits are in season, I had grapefruit for breakfast yesterday and today, saved the peels in a bowl and had all I needed to get started. And since  I’d rather share the recipe than my candied grapefruit peel (I’m being honest people), here is the recipe for you!

1. I removed the peel with a sharp knife, slicing right into the white  pith and ate the flesh (as I said, breakfast).

2. I dumped the peel in a pan, covered it in cold water, covered everything with a lid and brought it to a gentle boil. At that point, I left the kitchen to check my emails and came back when my home smelled like a grapefruit candle but you should probably stay nearby. The book recommends you simmer the peel until the white pith begins to look translucent.

3. I drained the peel and using the same (empty) saucepan, made a syrup by boiling the sugar with the 1/2 cup of water and the cream of tartar. While waiting for the sugar to dissolve and the liquid to bubble, I scraped off the white part of the peel with a spoon and sliced the peel in long stripes. Then I added it to the syrup and stirred it with a wooden spoon so the peel was completely coated and floating in the syrup. I lowered the heat to the lowest setting and then I’m afraid I left the kitchen again – more emails – but I’m not completely insane. I knew this step would be faster and unforgiving if messed up so I came back ten minutes later.

5. I drained the peel and faster than lightning, tossed the peel strips in a salad bowl with the last cup of sugar to end up with sugar all over the peels. (Your dentist will really hate this recipe, you better have a good electric toothbrush.)

6. Last but not least, I painstakingly removed every single peel with a fork and lay it on a rack to dry out. Every peel nicely spaced and not touching. I wish there could have been a quicker way to do this but I just sang my ABCs and was done in 15 minutes or so. Tomorrow they’ll be dry enough for me to store in a good airtight box, then I can tuck them away in a steel-reinforced visitor-proof safe behind the chimney wall and only I will wear the key around my neck. Or I could share with my friends who are coming over for dinner. I’m not sure yet. Time will tell. Time and my dentist.