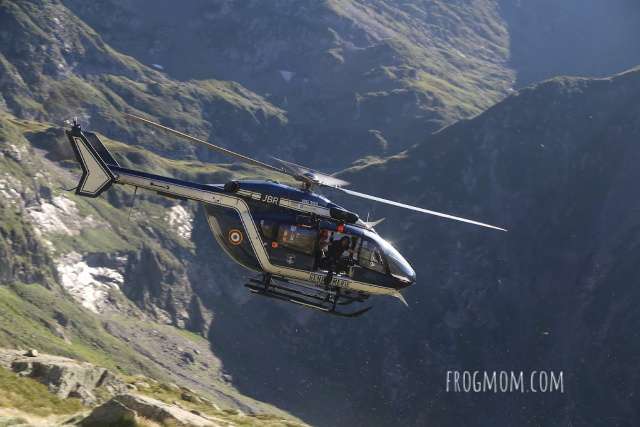 Four years ago, my father was airlifted from a mountain in the Pyrenees with a sprained ankle. Such a small accident would have been nothing in the city but on a mountain ridge a day away from any trailhead, let alone a city, it meant a stretcher, a helicopter ride and six gendarmes. The worst part is that when my dad slipped between two rocks that day, none of us in the group, including the mountain guide, realized the gravity of the injury. My father hobbled back to the refuge where the warden was a paramedic and he’s the one who realized the damage and called the airborne gendarmerie. That day, I promised myself that I would learn outdoor first aid and that’s exactly what happened with Surrey First Aid last week.

They organized a remote outdoor first aid training course in Surrey and invited me to come and review the course. I checked my calendar – it was free, told my husband he was on childcare duty – he was free, and Bob’s your uncle. If you love the outdoors or even if you just want to learn first aid skills near London, this is a great course.

With 18 people on the two-day course, I was really surprised to see how different people could have use for this type of knowledge. They included:

All the participants were really nice individuals and I was thrilled to meet such a variety of people. They are also people I would not meet during my daily life in London, despite us having interests in common, and it was a nice bonus to the course. Discussing with company director Jane Pearce, I also earned that the summer course and the winter course tend to have different participants as the winter course also sees ski/mountain sports instructors getting a refresher before the season starts.

In the words of Brendan the instructor and Jane:

“It’s always better to do something than nothing.”

What Is First Aid? 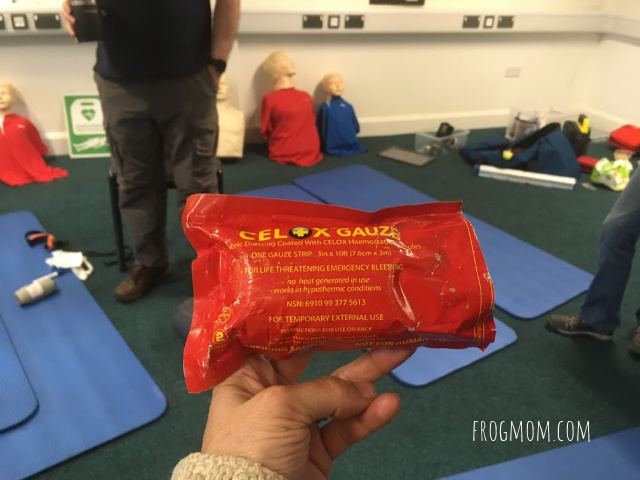 This is a question worth asking as I initially got first aiders and paramedics mixed up. The aim of first aid is to preserve life, prevent further injury and promote recovery. In practice, you help a person who’s injured, try to figure out what’s wrong with them, help them on the spot (if it’s an option) or wait for medics if it’s needed. The aim of first aid is not to save lives on the spot and that’s quite important as lots of serious injuries require further medical treatment.

What Did We Learn?

These are first aid processes that can be applied in all situations and they are great skills to know for life in general. I can’t count the number of bicycle accidents I’ve seen on the streets of London and I’ve so far been a useless bystander.

You may have been witness to someone choking on food or to someone drowning before and didn’t know how to react, which in itself is scary. Before helpless in the face of tragedy is scary. I’m really glad that I now know what to do as the course is a huge confidence-booster in addition to being educational. Plus, I received a great illustrated book on Outdoor First Aid that’s small enough to pack on a trip and can be used for guidance.

What Makes This Course Special? 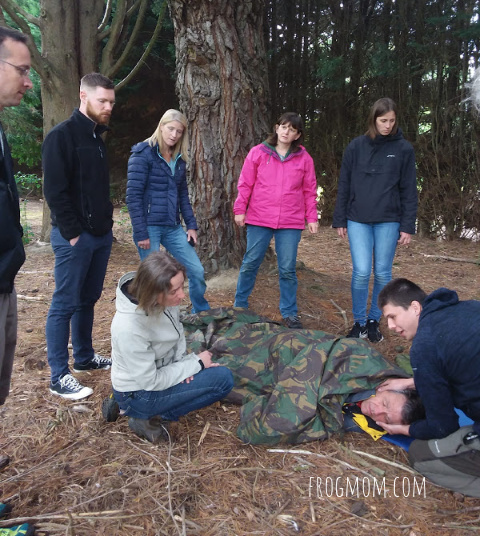 From what I understand, a lot of first aid courses are done in a room with an instructor listing/demonstrating processes to participants sitting on chairs but there’s no hands-on instruction. What Brendan, instructor for Surrey First Aid, did great was get us to practice on ourselves and dummies all the sequence of movements and phrases. The first time I played the role of the casualty, it was a bit funny and I felt vulnerable (as in, I’m closing my eyes – what I am supposed to do) but I soon overcame my reserves and played the perfect casualty until it was my turn to be the first aider for another casualty. Practice makes perfect is really true in the case of first aid and until I had repeated the first aid process 10 to 15 times, I had underestimated the value of hands-on repetition. 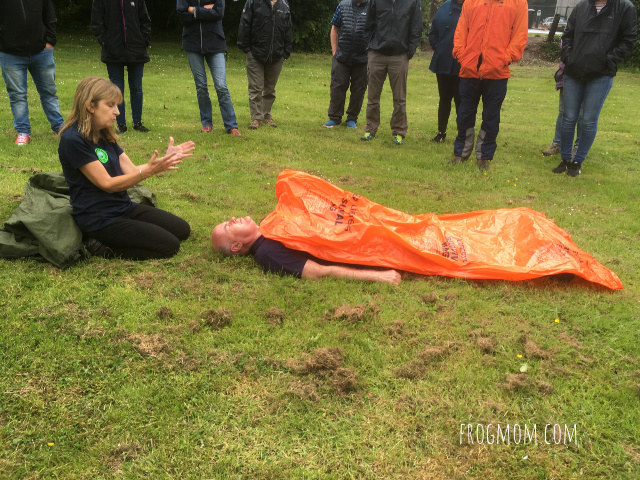 If you’ve never done it before, how are you supposed to know where on the chest to press for CPR or even how deep? Brendan had iPad-connected dummies for that, lighting up when we did the CPR sequence right.

How do you know that there’s such a thing as CPR music, that “Stayin’ Alive” by the Bee Gees or “Another One Bites the Dust” by Queen have the exact right beat to perform CPR on an unresponsive casualty? Yes, roughly 103 to 112 bpm. Cool stuff. (Just probably don’t sing the Queen song lyrics out loud as it might freak out bystanders or the casualty if they can hear you.)

The course I attended took place in the classrooms and on the grounds of Merrist Wood College outside Guildford and as it is set in parkland, it was very easy to learn a process in the classroom before stepping outside to play out accident scenarios. In between two rain showers, we even sat on the lawn outside the classroom for lunch which was great. 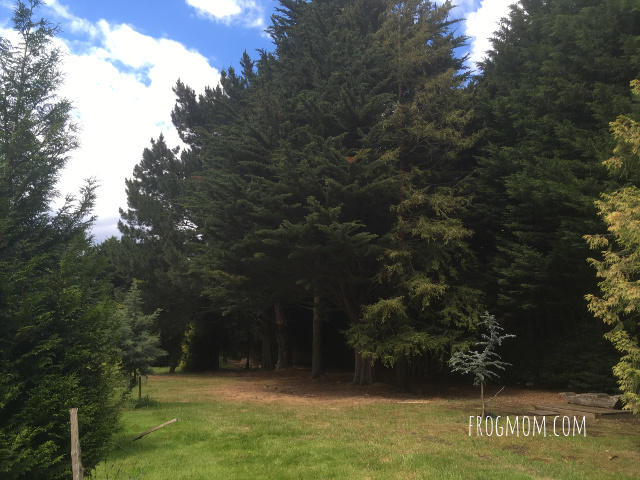 Talking about the weather, we were rained on during the last big scenario role play on the second day and guess what, it was perfect! If anything bad’s going to happen outside, it’s probably not going to happen on a nice sunny day and it was great to practice on a chilly wet day.

How Did Participants Improve The Course?

I did not expect to hear about tropical or warm country situations, this being Surrey after all, but it turned out that the combination of participants’ experiences and interests/needs made it essential to broach a few topics.

The retired gentleman who leads hiking groups was able to give itinerary and emergency pointers to the social worker about Tanzania. The modern Indiana Jones showed us a monkey bite scar and explained how tetanus shots taken before a trip are not as painful as tetanus shots after you’ve been bitten by a rabid monkey or other animal. 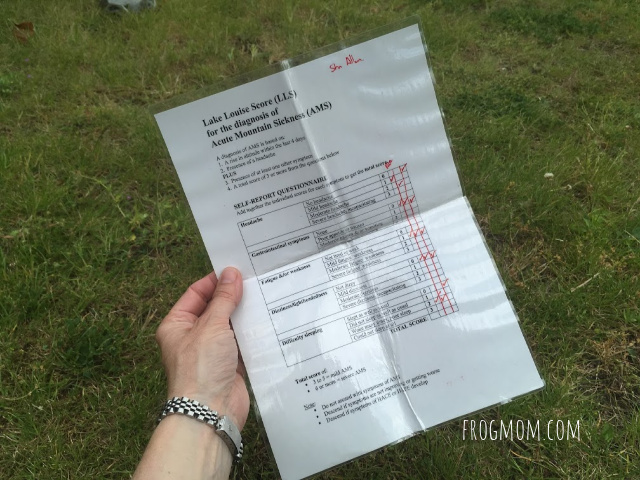 The Army officer gave us an extensive explanation, with first hand experiences and his own training material, about Acute Mountain Sickness. It was really great to be able to enjoy this type of experience that none of us had. When we discussed hypothermia, I shared my own swimming experiences about cold water hypothermia which is very different from dry land hypothermia. Pete the mountain leader in training suffers from diabetes and told us exactly what to do.

Every participant really made the course much better as people were able to share their own experiences and this was invaluable.

What Surprised Me Most?

Last but not least, you have to accept that you can’t save everyone and that in certain situations and despite your best efforts, someone is not going to make it. I read this morning the report of a caver who joined a search & rescue operation for an injured caver in the Yorkshire Dales. The operation lasted 17 hours, involved 100 volunteers and sadly, the injured caver died during the rescue operation which means that they dragged a body out of the cave in very challenging conditions.

Stuff happens that’s out of our control and we just need to accept it.

As you’ve guessed, I highly recommend this course and truly believes that learning first aid can benefit everyone. To sign up on future courses by Surrey First Aid, visit their website and browse way. They are very professional, responsive and efficient. 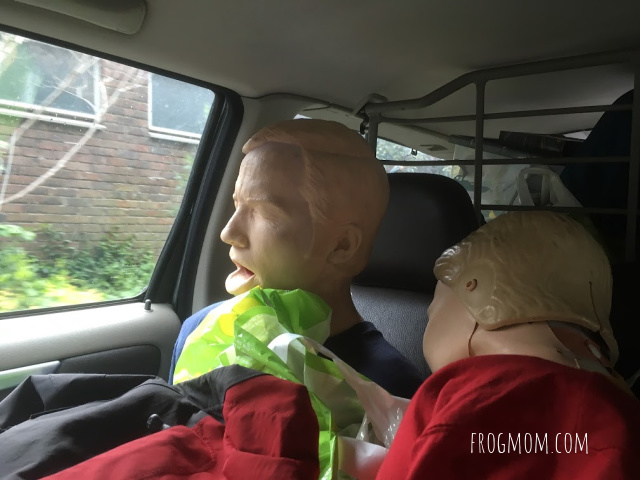 On a personal note, they even arranged for the instructor to give me a ride from the train station  by the company director and a ride back by the instructor, which allowed me to ride with the creepy dummies.

Thanks to Jane Pearce and Tara Burn for inviting me to join this course and to Brendan for his expertise and good sense of humor.