Bees are some of the most important animals on our planet and yet, like so many other species, their existence is threatened by humans. In the spring of 2020, I was lucky to be able to assist amateur beekeepers with the rescue of five swarms of wild honey bees. In rural southern France, my father’s garden is beautiful during springtime. Picture plum and almond trees with pink blossoms, tiny green apricots growing slowly on branches, wild poppies and dandelions going crazy in the fields. Waking up from hibernation, swarms of wild honey bees are out looking for a new home.

The Secret Life of Wintering Bees

My friend Christine Sculati once offered me a book on the wintering behaviors of animals. It was fascinating, like what ladybugs do. The bee chapter describes how honey bee workers huddle, heads pointed inward, into a cluster around the queen and her brood to keep them warm. Bees on the inside of the cluster feed on the stored honey while the outer layer of workers insulates their sisters inside the sphere of honey bees. The survival of the colony depends on it and they keep vibrating and warming up the hive until spring comes around.

I thought it was an amazing metaphor about a highly structured society working towards the greater good, the greater good being crystallized in a single individual, the queen bee, or rather in its wellbeing. Alive and well fed, the queen bee gives birth to other worker bees and ensures that the colony thrives.

Two weeks into April, I was weeding in front of the kitchen when I spotted an unusual tiny shape on the ground. It was a dead bee and inches from it was another bee, not dead but just about, clambering up and around a blade of grass before falling softly to the ground. It was in bad shape. 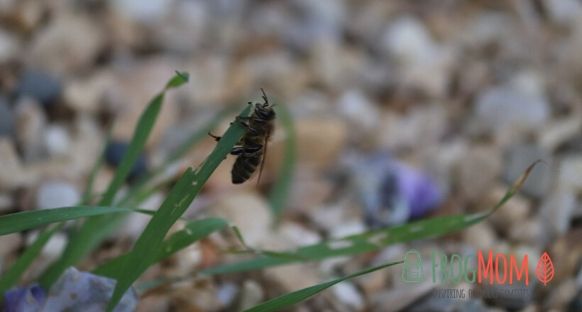 Immediately, I thought about the Colony Collapse Disorder and was alarmed as last year in 2019, we had a bee tragedy at my dad’s home. One spring day, he spotted an entire swarm of bees up at the top of the stairs in his home and called a beekeeper. The next day when he showed up, all the bees were already dead.

Not a single one survived.

It was a devastating experience and no isolated incident either. The beekeeper explained that this was happening all around the region in Occitanie. Pesticides in gardens and fields, cold spring nights, low biodiversity — a number of factors came into play and caused the death of entire swarms of bees and the end result was very sad.

Remembering 2019, my heart sank when I spotted these two dead bees on the ground. I ran up the stairs to see if I could spot another swarm of wild bees up near the roof and maybe rescue it but found nothing. I asked my dad if he knew where I could find wild bees in the garden and he pointed to two particular plane trees. Both have hollowed trunks that make for perfect beehive spots sheltered from the wind. 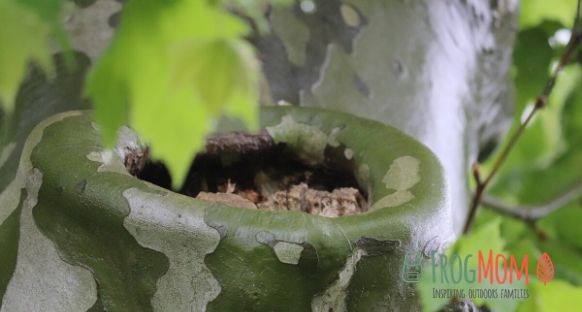 I couldn’t see any bee activity so I resolved to look another day.

Three days later, my dad told me that a swarm of wild bees had just been spotted in the garden. Could I call the beekeeper? I grabbed my camera, ran down the stairs and headed to the flower bush where the bees were so I could take a picture. If they left within the hour, at least I would have proof. 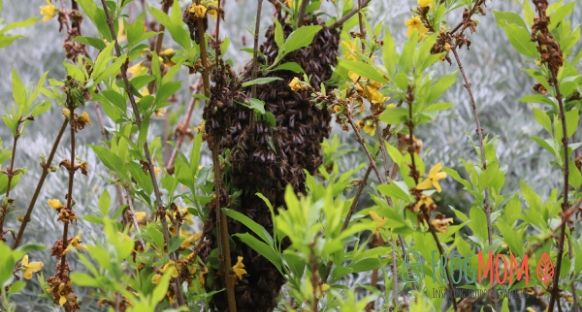 There they were, buzzing away, all wrapped up around the thin stem of a shrub called Forsythia intermedia. With bright yellow flowers, this shrub (it’s actually part of the olive family) originates in southern Europe and is the Belle of the Ball in spring. It is also a foraging source for some early season bees, which might explain why this swarm suddenly appeared overnight in this shrub. It was spectacular and once my picture taken, I ran back inside the call the beekeeper.

Why do Swarms of Wild Honeybees Need Help?

As you may know, worldwide, honeybees are facing a crisis in the form of Colony Collapse Disorder. Entire hives of bees disappear seemingly overnight, leaving dead workers and a dying brood behind. Bees swarm in the spring as a way to reproduce and form a new colony and look for a new site. While they’re looking for a suitable new home, these swarms sometimes make brief stopovers on tree branches, walls, road signs or other objects. If they find a safe site such as a chimney or a hollow tree, then great. You don’t need to do anything at all.

However some people feel threatened by swarming bees and exterminate them with sprays, as they would wasp nests. That has to be avoided at all costs. Even when left alone by humans, swarms of “transient” honeybees are homeless and vulnerable to environmental disturbances, meaning that many don’t make it to their next hive. That’s why allowing beekeepers to collect swarms can be the only way to save the bees.

I called the only beekeeper I knew, about 40 miles away from my dad’s home.

Me: “We have a swarm of wild honey bees that needs rescuing!”

Beekeeper: “Sorry, but I cannot come because of lockdown. I would be arrested by the gendarmes and be fined for it. Collecting swarms of wild bees is not an essential activity.” He sighed. He really wanted to come collect these bees and was sorry.

I ventured, “Is there any other way I can help the bees?”

He brightened up. “You can look up the list of bee swarm collectors in your area.”

During the first COVID-19 lockdown, proximity was the key to success. He shared this website to look at for the department of Hérault and said to click on the “Cueilleurs d’essaims” tab. Cueilleur d’essaim means swarm collector in French.

Who knew there was such a hobby as swarm collecting? Apparently if you are an amateur beekeeper, that’s what you do. I found the name of two guys in the next village over on the list and called the first one. He was instantly interested and said he’d be over in half an hour. Wild bees don’t wait around so time was of the essence.

Half an hour later, the local swarm collector aka beekeeper who went by the name of César was at the door, driving a minivan. From the back of his van, he got out a beekeeper’s head cover as well as a pale blue beehive. The process of collecting the swarm was in motion.

First, he examined the swarm and opted to install the beehive as close as possible to the swarm, to see if they decided to migrate nicely to their new home. When they didn’t move, César asked if he could snap the branch and did so with his bare hands (which I thought was crazy dangerous). 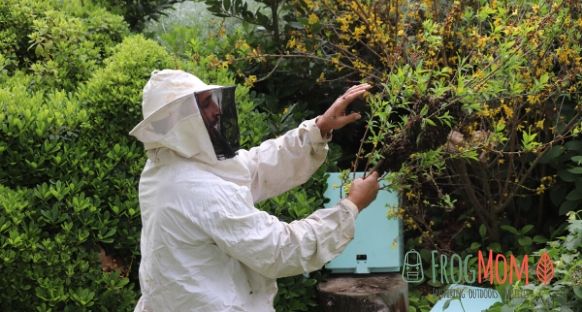 The lid of the beehive was off and he then turned around slowly to position the swarm of honeybees as close as possible to the beehive. 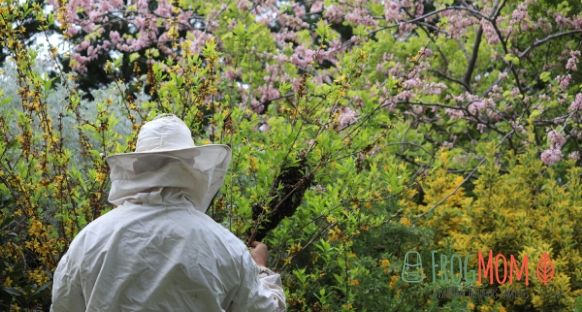 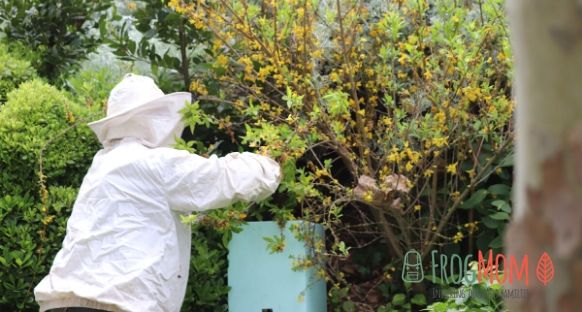 I was mightily relieved when he removed his head net and said that I could come closer if I wanted to. The whole time, I didn’t know whether the bees were going to attack him though he kept saying that swarming honeybees are not naturally aggressive. 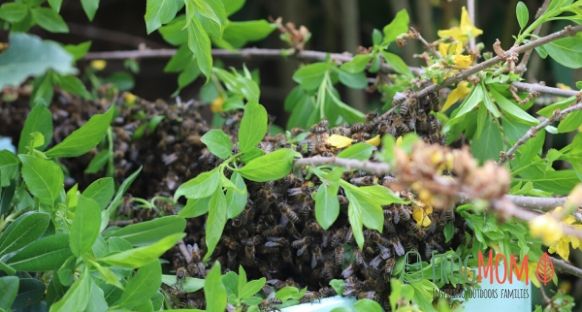 Intrigued, I came as close as I dared and peeked. It was incredible, this moving mass of buzzing bees sort of sliding down the branch into the beehive, sort of flying around, and a rebel group starting to form a rogue swarm around another nearby branch. 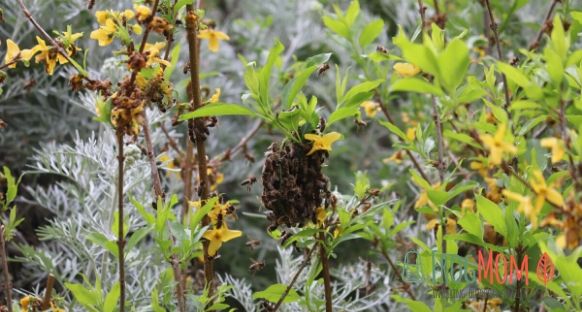 So much activity. César gently shook the branch some more until most bees had migrated to the beehive and then decidedly stepped back, very relaxed. It was still mid-afternoon and the whole swarm would take a few hours to migrate inside the beehive. He closed the lid and left a small opening at the bottom for the other traveling bees to join the queen bee.

How Many Bees in a Swarm?

At that point, I asked what I thought was an impossible question – how many bees were in that swarm?

How did he know how many bees were there? According to him, the standard measurement is that 10,000 bees weigh a kilogram. He estimated that the branch he lifted weighed 1.5 kg, hence 15,000 bees total.

Well, you don’t say. I’m not sure that it was very scientific but at least, it was a very satisfying answer.

Later that night, after dark, César returned to collect the beehive. He was on his way to collect another swarm, three times as big as ours. In a single day, he had collected 60,000 bees. It may be for honey production, but I was relieved that these honey bees had not died like the previous year.

The following day as I was walking around one of the plane trees, I heard another swarm of wild honeybees. I knew what the sound was before I lifted my head and spotted a frenzied activity of bees going in and out of a hollowed branch. It’s this one. 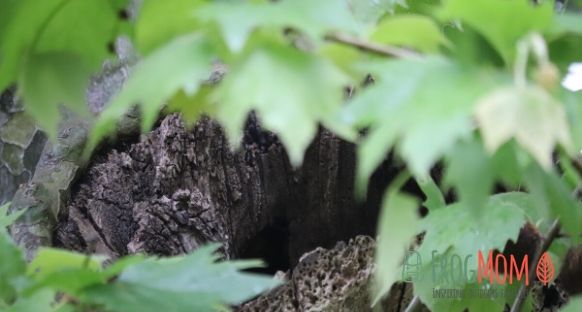 The buzzing in the air was just crazy, this unmistakable hum that grew more intense the closer I got to the branch, but not so close as to appear threatening. Inwardly, I smiled. Hopefully this swarm of honey bees would be fine. They had a solid home. A good hollow tree sure beat a flimsy Forsythia intermedia branch. No offense to shrubs, but centenary plane trees are a better bet to keep a beehive safe. Good luck to this new colony for the season.