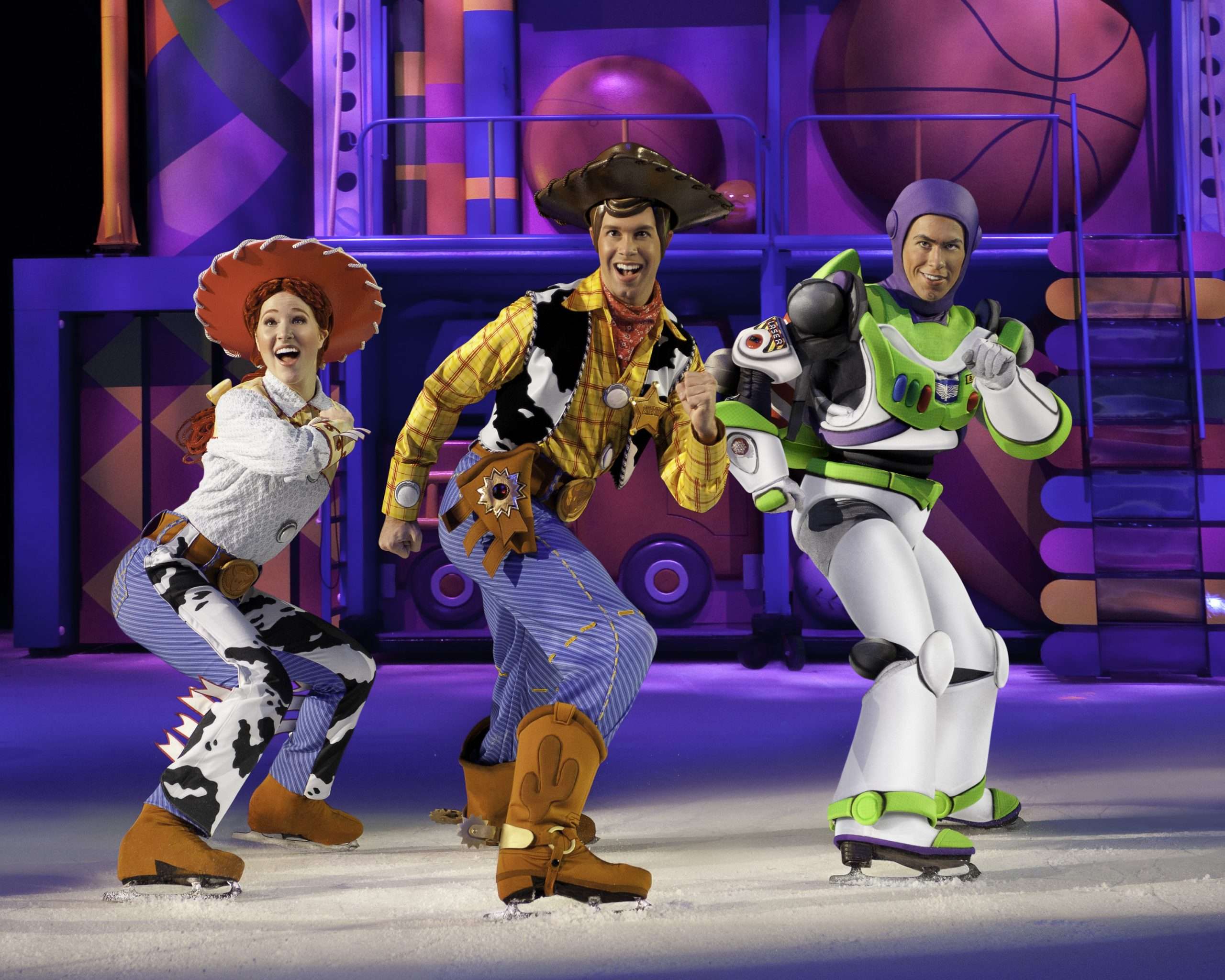 You have to give it to Disney. Everything they do is sleek, professional and upbeat. That includes the latest Disney on Ice show we went to see with my girls, Disney on Ice: Toy Story 3. I mean, 96 sets, 38 skaters on ice, a giant toy set 3 stories high – this is a big production. We are big fans of Toy Story at home and every single one of our  Disneyland expeditions includes several trips to the Buzz Lightyear ride. However we wondered, how would that translate on ice? “Mom, it’s not the same,” commented my 6-year old. “Yes it is!” protested my 8-year old, “They’ve simply mixed Toy Story 2 and Toy Story 3.” Turns out they’ve blended Toy Story 1, 2 and 3 in one show. Never mind the movie-ice-curacy, the real question was: was it good?

I’ll write this from the combined perspective of my girls who have more Toy Story experience than I, and I, without any Toy Story experience. After all, if the parent takes the kids out, the parent might as well get something out of it. The show was entertaining and the first act definitely grabbed my attention. The scene when all the toy G.I. Joes led by Sarge march and perform drills on the ice was one of my favorites. When Buzz Lightyear made his grand entrance flying down from the ceiling with fire, smoke and action, my girls burst into clapping and the arena roared with kids’ cheering. I also loved that the musical score included some familiar tunes. My girls were thrilled by the round up/hoe down group dance, a magistral number led with pizzazz by Sheriff Woody and Jessie the Cowgirl.

However the novelty of the 1980s revival score wore out in the second act and the plot felt more contrived, leading to a few yawns and some people leaving early. Admittedly, a 7.30pm show start for an audience comprised mostly of preschool-age kids is kinda late. Since most people arrive in the parking lot around 5pm anyways, a 6pm showtime would be easier on the little ones. A friend of mine complained about “too much pre-recorded bad singing” and “too much waiting.” Yup, the second act could use some tightening.

Despite its flaws, the second act still had some great moments. The Barbie and Ken duo really shined on ice and we felt they were the strongest skating couple of the evening. “Mom, is he really carrying her on his arms?” wondered the 6-year old. They were quite fantastic. As a Toy Story newbie, I was surprised to find out that Ken was a villain (might I add, badly dressed) and Barbie a not-so-dumb blonde. Hey, that’s got to count in the show’s favor, right? That Barbie isn’t all about workout and fashion but can drive the action forward with some cunning – you go girl. It reminded me of Legally Blonde and the Barbie DVDs (yes, we’ve got those) where Barbie always rescues the guys who are worthless anyways.

The grand finale rounded up all characters on ice plus the Mickey Mouse club in a last cheerful note. I would have stayed til the last note but I was afraid of crowds exiting the parking and lines were already forming in the stairs. It was late and my 6-year old was nodding off. Ironically I got out on the wrong side of the arena and ended up spending twice as much time finding my car than anybody else who stayed til the end. So much for the exit strategy!

In a nutshell, Disney on Ice – Toy Story 3 is a good show that kids and adults will enjoy and I would recommend it to anyone who’s got young Toy Story fans at home. Don’t expect the exact adaptation of the movie, that it’s not. Expect tons of beautiful costumes and perfectly executed ice skating routines. Expect it to be loud too. My girls sure had fun and their favorite part was the G.I. Joe’s number. However be aware that the show’s length (2 hours) might make it difficult for kids age 3 and younger to sit through the whole thing. I would say that it’s a better fit for kids 5 years and older. Have fun!

The Oakland Oracle Arena couldn’t be easier to access from San Francisco. It’s right off I-880 and so big you can’t miss it. I timed the car trip and it took us 30 minutes both ways from Pacifica.

The parking fees at any event rate are horrendous but the fees for Toy Story 3 at the Oracle Arena were particularly breathtaking. $25 per car. One word: carpool!

Abysmal as usual but since you can’t bring in outside food or drinks, you’re pretty much trapped and I wasn’t happy being trapped. I can’t believe I paid $12 for a plastic bucket filled with butter popcorn and $5.50 for a water bottle. Outside of the popcorn/water bottle choice, I could have indulged in nachos with some unidentifiable orange cheese, triple fried chicken, gummy bears or artificially-sweetened shaved ice treat. And you wonder why there is an obesity problem in the country? Just because I go to a massive public events doesn’t mean I want my choices limited to junk food. Oracle Arena, are you listening?