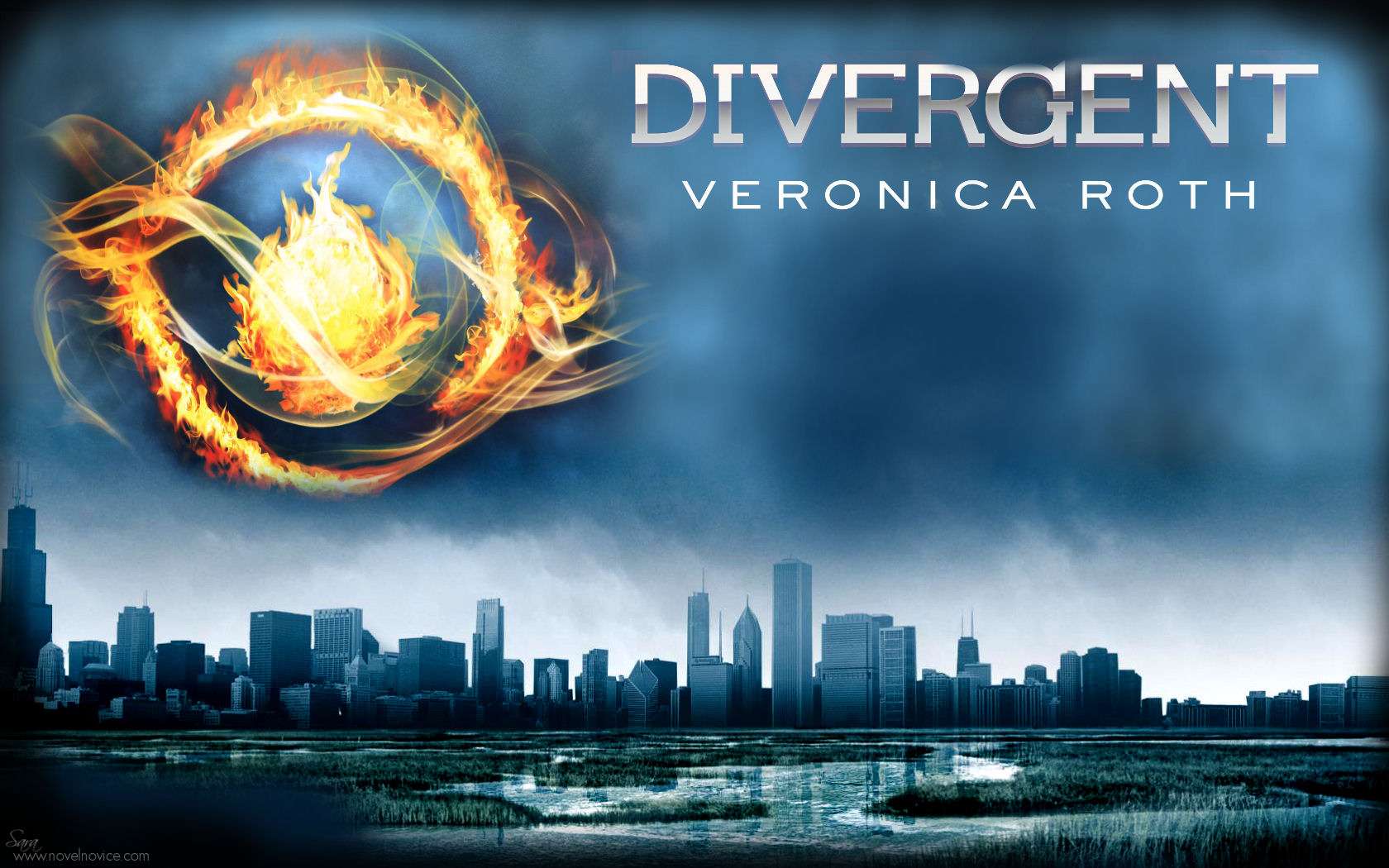 Dystopian novels have become the latest literary chick-flick with a strong female lead, a tough-as-steel love interest, impossible survival odds, a miserable world and video game-intensity action scenes. Oh, and it’s got to be a trilogy you can read on the beach in 3 days without breathing to qualify. On all fronts, Divergent

delivers. I started it with mild interest, half-convinced by the characters and the post-apocalyptic world, but the moment I questioned whether or not I should brush my teeth after breakfast to keep reading it – that’s when I knew I couldn’t put it down and had to finish the book. Despite structural flaws, Divergent is a engrossing read that will keep you on edge for a few hours until you close it and decide to pick up book 2.

In a post-apocalyptic Chicago, people are born and raised into one of five elite Factions defining human nature. Abnegation people are selfless, Amity people are peaceful , Candor people are honest, Erudite people are smart and Dauntless people are brave. In that world, children choose their faction at age 16 and when 16-year old Beatrice realizes she’s not cut out for a single faction but for three, she learns she’s Divergent. At the Choosing Ceremony, she opts for the Dauntless even though she was raised in Abnegation and a merciless commando-style boot camp starts right away. Beatrice changes her name to Tris and a new life begins, away from her family. Led by borderline-sadistic leaders, the Dauntless initiates go through a hard daily grinder of physical and emotional tests, each new challenge raising the bar of OMG-you-must-be-nuts. Making fierce enemies and finding new friends along the way, Tris also discovers love and that’s where I stop my synopsis because I already said too much.

Dauntless is a world cut out for Goths with an itch for extreme activities and as such, dangerously attractive. Dauntless don’t get off trains like you and I – they jump off speeding train onto roofs of buildings to get around town. Tough luck if you can’t make it. They also learn fist-fighting, weaponry and self-control. The protagonist climbs bare-hands to the top of a Ferris Wheel and goes down just hanging on to a cage whooshing down to the ground. She also ziplines down a 100-story building above a swamp to an invisible landing point. The world haunted by the Dauntless is not a restful place.

Now Tris – that girl redefines girl power. She’s definitely no Mary Sue: tough, selfish to the point of cold-heartedness, driven and emotionally clueless. In most dystopian novels, the girl protagonist endures life-threatening situations against her will and it’s painful to read. In Divergent, Tris not only feels awake in the face of danger, she welcomes the thrill and chooses it. It’s a come-and-get-me sort of painful. I loved that. Tris is not helpless like your Twilight Bella and she’s certainly less annoying than the Mortal Instruments‘ Clary Fray. She’s not calculating and bratty like the Hunger Games‘ Katniss either. She’s less something else and I hope she stays so through the trilogy.

Then there’s the romance and that’s where I need to quote my friend Ryan’s husband. Ryan reads a lot of YA and regarding her reading tastes, her husband said “there’s a fine line between post-apocalyptic teen novels and romance novels.” Meaning – they’re romance novels in disguise. And I couldn’t agree more! The Divergence Tris-Four couple will make teen girls swoon and moms feel faint – dunno about the guys so I’m not going to take position. They’re sexy as hell and so well balanced. Four and Tris start out as friends and slowly build their relationship. I love that for once there’s no love triangle, that they respect and treat each other as equals. No one needs to rescue the other and it’s just as well. Isn’t that refreshing?

Last, the pace of the book is incredible. If you’re looking for fast-paced, you’ll get fact-paced laced with adrenalin, anticipation and a serious lack of oxygen. Veronica Roth has a knack for storytelling and it shows. Though it took me 100 pages to really get the hang of the story, once I was hooked I kept reading until I turned the last page. Which leads me to a friendly word of advice: don’t pick up the book unless you have at least 3 or 4 hours ahead of you. The book contains 487 pages of text and you’ll need that to read them in one or two sittings. Snippets of time would be incredibly frustrating. Find a comfy chair, pour yourself a beverage of choice (tea in my case) and start reading.

As much as I enjoyed the book, some of the characters felt stereotyped. A lot of the villains display bully traits even before they start acting up – beefy, humorless, possibly not very bright. The minute they’re described, you just know they’re not your friends. The main bad guy is called Peter and until the bitter end, he acts all black and white, rotten through alongside half-witted side-kicks. The good guys, on the other hand, shine by their wits, their brain, their friendliness and their modesty. Sometimes as I read I was like, come on! Could it be a little bit more complex than BFF vs douche? There’s one exception to that, actually, a good guy who errs on the bad side for a couple chapters – I like it when characters go out of their comfort zone – but unfortunately for him, things don’t pan out as planned.

Now the plot. Yes the story is masterly led at break-neck speed. No contest. However for me it included a certain level of predictability. Tris is much too slow to pick up on Four’s intentions and I came to several conclusions before her which rarely happens to me in books. (I’m one of those readers who’s constantly surprised by the twists and turns.) The Erudite’s messages on Abnegation clearly meant war but nobody seemed to pay much attention at all and the ending came as a shock to the book’s characters – not to me. Tris’ mom was clearly not what she looked. I could tell from the start.

Then the writing and I’m torn on this one. I like books with a unique voice, where words are cherry-picked, protagonists inspiring and tough issues tackled. There’s no denying Veronica Roth’s style is efficient, fluid and vivid. Divergent‘s short sentences jump at you like so many addictive bullets of story and you can’t help but absorbing them with the fever of the voracious reader. The training scenes are amazing and visually striking – you’re almost there.

And yet, the book is neither elegant nor unique and I wish it were, to elevate a good story to a masterpiece. The writing style is forgettable – nowhere in the book did I stop and think “oh wow, that is so well written. Let me remember that for a conversation piece.” In fact, I didn’t stop at all when I was reading (though I did brush my teeth) and perhaps that’s what that type of book needs – a forgettable style so the story isn’t encumbered by literary devices. I don’t know.

I also wish the Faction society were more believable; it seems so contrived to reduce human nature to only five words – some of which I didn’t agree with. The dystopian world could also have more solid foundations – how did we get to that Chicago? Where’s Earth’s population? What does it really mean to be factionless?

While Divergent brushes on totalitarianism without being convincing, its main thesis concerns kids’ identity,  leaving home and belonging. It is relevant for teens and how could it not be? When Veronica Roth wrote this novel, she was barely out of her teen years and she was 22 when it was published. I’m in awe of her achievement at such a young age. At the same time I wonder – is the story shallow because of her age? Because it is shallow and that’s OK. After all, the book doesn’t claim to be a theological reflection on human nature.

At the End of the Day

I soon as I finished the book, I felt disappointed I didn’t have book 2 to start right away. Despite everything I’ve said, I still had a lot of fun and I’m willing to sign for another 500 pages of Tris and consorts. I know that the 3 book is slated for an Autumn 2013 release if Veronica Roth hurries and writes it. Should I read book 2 now and wait an entire year to find out the end of the trilogy, or wait a year and read both book 2 and 3 in one sitting? Decisions, decisions.