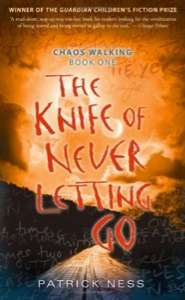 > Review: The Knife of Never Letting Go by Patrick Ness

Review: The Knife of Never Letting Go by Patrick Ness

In the New World’s Prentisstown, only boys and men live a tough life of survival polluted by a constant Noise of other people’s thoughts. Inhabitants hear and visualize what other people think, whether they like it or not. All females have been killed by a mysterious disease that brought on the Noise. A month short of “turning into a man” at age 13, Todd Hewitt is forced to flee his home with his dog Manchee, a talking dog. In the swamp that surrounds Prentisstown, they meet a girl who becomes both an enigma and the key to vital questions. The trio is relentlessly tracked by the mayor of Prentissstown through a world they know nothing about and the violent manhunt leads to chaos, pain and heart-thumping action scenes. Only at the end do we understand why Todd Hewitt is so important that an army needs to capture him even if the price is merciless manslaughter along the way.

The Good
The Knife of Never Letting Go: Chaos Walking: Book One

follows a series of clues leading to a bigger discovery, all told in Patrick Ness’s unique mystical prose. I picked this book because I was so impressed by the author’s 2012 Caldecott winner, A Monster Calls: Inspired by an idea from Siobhan Dowd

. Though Patrick Ness’ storytelling technique takes a while getting used to, it is a voice I love for its quiet drama and abstract “a la Gertrude Stein” string of words that go on and on over several lines to wind up in powerful images. Read this excerpt and see by yourself: “Noise is noise. It’s crash and clatter and it usually adds up to one big mash of sound and thought and picture and half the time it’s impossible to make any sense of it at all. Men’s minds are messy places and Noise is like the active, breathing face of that mess.”

Thanks to details peppered in the right places through dialogue, Noise or thought, the world-building is effective and the action gripping. Patrick Ness manages to give each character a distinct voice and the candid rural voice of Todd is one that sticks with you long after you close the book. This is Too speaking about not needing a gun to hunt in the woods: “Not if yer a good hunter. Rabbits are easy with snares. Fish with lines. You can catch squirrels with yer knife but there ain’t much meat.”

The story’s got a good-hearted not-so-dumb talking dog and a cruel man chase for no apparent reason, a smart sci-fi angle and perfect cliff-hangers at the end of each chapter, a gloomy world where hope hangs in there by a tight and fragile thread – all ingredients for a good dystopian fantasy.

Though I know it put off some readers, the fact that the story is essentially dark and unhappy is something that didn’t bug me at all. I don’t believe in happy dystopian novels and I agree that the right reading age is 14 years and older. It’s a rare case of 13-year old hero story that can only be understood by older ages. Usually readers are younger than the hero. Here we have a reverse situation justified by the graphic violence and questions raised. As with “A Monster Calls,” Patrick Ness manages to raise mature questions (information overload, the meaning of truth) with a teen coming-of-age story.

The Bad
Though I loved Patrick Ness’ “A Monster Calls” I was not as enthused by “The Knife of Never Letting Go”. I don’t give the book 5 stars despite the author’s incredible writing craft for several reasons. First, I didn’t like that the story didn’t have a closure. I hate it when book 1 prepares the grounds for book 2 and is not a stand-alone book. I bet that book 2 is merely ground work for book 3 too. What’s wrong with a stand-alone book?

Then there’s this villain who keeps dying (or so we think) and then keeps coming back in increasingly mutilated form. The first time it’s fine, the second time it gets repetitive, but the third time, seriously?

As far as the story’s complexity, New World could have been more detailed with richer vocabulary. As it is, it seems to me that the book is meant for older readers but uses vocabulary for a younger reading age.

Last, I found I didn’t care much for the main character. That said, I didn’t care much for the protagonist in “A Monster Calls” either but I found the story so compelling that empathy with the subject was secondary. Todd Hewitt is a brave boy but I find him slightly offstandish. The girl character, whose Noise we cannot hear (Noise only affects males), is more of an emotional puzzle but I’d like to see her more involved.

At the End of the Day
Despite all, the book is a great read and I would totally recommend it to teens or adults who love a good fast-paced story in a fantasy world well built. I will probably read the second and third books because I like the writing style but I hope I’ll be more excited when I turn the last page.