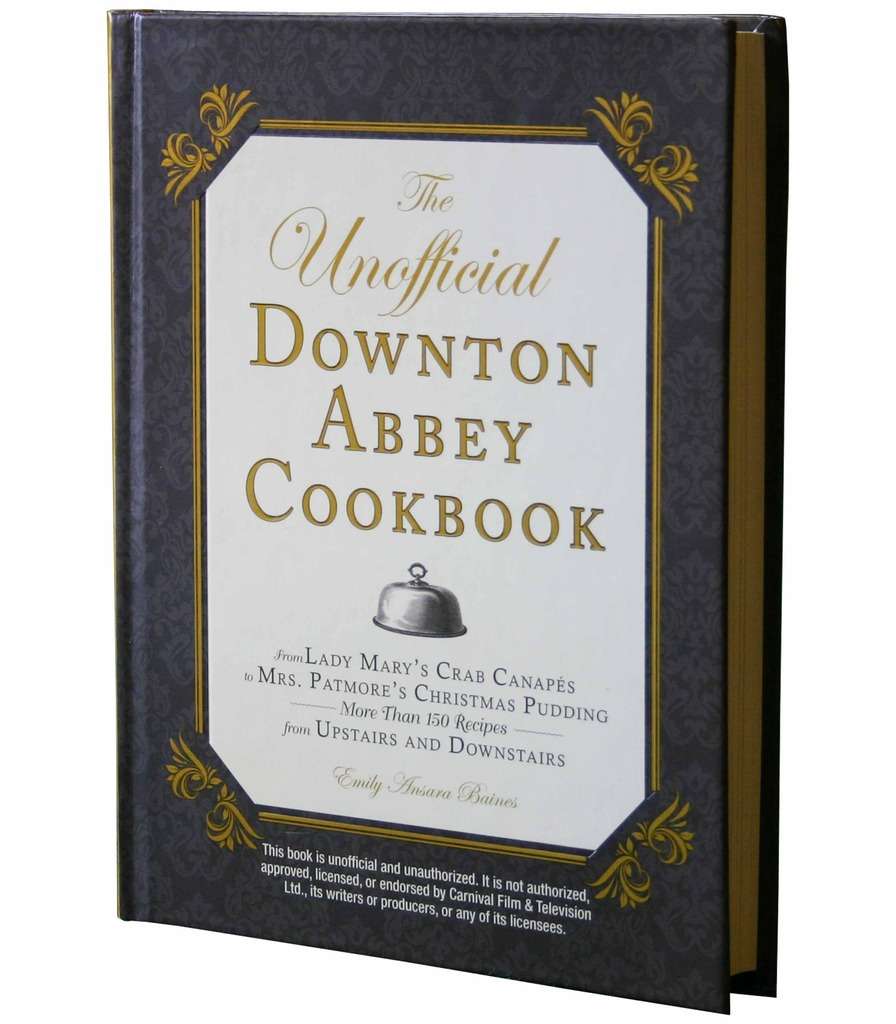 Downton Abbey fans, you’re in for a treat! If you can’t get enough of the Dowager Countess of of Grantham, Lady Sibyl Crawley or Elsie Hughes, you can now replicate the atmosphere of the grand house around your dining table. When I first saw The Unoffficial Downton Abbey Cookbook, I was suspicious at best. There are tons of “unofficial” cookbooks out there – True Blood, The Hunger Games, The Game of Thrones, Harry Potter to name a few. What could this one possibly be worth? Intrigued, I checked the table of contents and surprisingly, a lot of the recipes looked palatable. I clicked the “buy” button and two days later, the mailman delivered it. I know my mom will be happy to see this book because she’s a big Downton Abbey fan and dreams about visiting Highclere Castle where the series is filmed.

My first thought when I browsed the book – after ripping open the cardboard packaging – was about the Titanic. The addictive TV series Downton Abbey is set in the 1910s (starts in 1912) and what better source of information about sumptuous dinners than the most sumptuous restaurant that ever floated the seven seas? I checked the reference list in the book and bingo! The first line refers to Last Dinner on the Titanic: Menus and Recipes from the Great Liner. It had to be there. If you’re going to write about the menus of an aristocratic British family, you should check the best of the post-Edwardian era.

But enough blabber. Let’s get to the contents of the cookbook, shall we?

Fittingly, the cookbook is divided into “Dining with the Crawleys” (upstairs) and “Sustenance for the staff” (downstairs). Now because high society dinners were such elaborate affairs, the “upstairs” section occupies three quarters of the book while the “downstairs” gets a quarter only – there, social inequalities down to the cookbook!

The Crawleys obviously have all the fun – grilled oysters with garlic butter, Daisy’s mustard salmon with lentils, Lobster with Mornay sauce, classic beef Wellington or dark desires chocolate cake. Just the names of the recipes are a grand affair by themselves. However the “downstairs” fare looks remarkably close to standard British pub fare which to my stomach is A-OK. Think mushy peas, Mrs. Patmore’s downstairs pork pie, working-class porridge, breakfast baked beans or meatless mince pie.

Now what would a recipe be without the context? Just another cookbook, not a culinary dive into a sophisticated period world. Enters the bonus of this book. The reason why this cookbook is a keeper is that each recipe is accompanied by a suggested course pairing, historical facts, tips for table seating and etiquette guidelines. Essential for perfect entertaining!

You can serve the Earl of Grantham’s green turtle soup and impress your guests by dropping that it comes from the West Indies and was shipped by boat on a bed of ice chopped off the glaciers of the Himalayas. Not true but who cares! It’s all about decorum. Obviously finding green turtle will be challenging because I don’t even think it’s legal to buy green turtle as meat (and they need more protecting, not more hunting) but since everybody says it tastes like chicken, you can fudge it with chicken dark meat. That’s just my suggestion because the cookbook doesn’t shy away from suggesting “2 1/2 pounds of turtle meat, diced.” Good luck with that.

I chose that example for its extravagance but honestly, most of the recipes are largely doable in American and European kitchens. This was just for fun. With my taste for sweets, I spent a lot of time hunched over the Tea at Downton Abbey section and plotting home-made chocolate digestive biscuits, classic cucumber sandwiches or mixed berry scones. And if you don’t live in the UK, you can learn how to make your own clotted cream (yes you can, all you need is heavy whipping cream and 6 hours in the oven) and sign up for an ultra-marathon to shed off the extra pounds.

A last note to lovers of coffee-table-cookbooks – this cookbook includes no photos at all. You’ll have to use your imagination or replay the series’ kitchen and dining scenes.

Below are 2 recipes excerpted from the book. Thanks to F+W Media!

In the United Kingdom, as well as in Greece and Ireland, digestive biscuits were thought to aid in digestion. It was believed that the sodium bicarbonate (baking soda) in these cookies—known as “digestives”—helped the digestive system. It is likely that many of the family members in Downton Abbey would have digestive biscuits, both with and without chocolate, lying around their room for times when they were feeling queasy. Considering the heaviness of their meals, the need for such biscuits would be quite great!

The British enjoy their digestives with coffee or tea, often dunking their cookies directly into their beverages. It is said that Alexander Grant, an employee of McVitie’s Biscuits in Scotland, developed the digestive biscuit in the nineteenth century, with the first advertisement for this particular type of biscuits run by the British company Huntley & Palmers in 1876.

Depending on who you want to impress, you could call this dish by its French name, Filet de Boeuf en Croûte, or by its British name, Beef Wellington. Some claim that a rather patriotic British chef named this dish Beef Wellington out of British pride; others claim it is named after a seventeenth-century duke. Either way, this favorite—consisting of a solid filet of beef covered by pâté and surrounded by a pastry crust—would be a staple for many a dinner at Downton Abbey.

Although nowadays no one would look twice if you cut your meat into bite-sized pieces before eating, back in the nineteenth century and early twentieth century it was considered rude to do so. Rather, you were supposed to cut yourself one bite-sized piece of your meal, put down your knife, take a bite, then repeat. No wonder dinners took so long to finish!