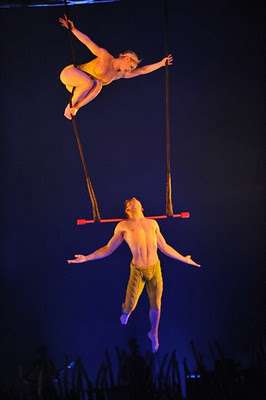 After the show, my girls clapped wildly though it was 11pm and way past their bedtime. The smile on their face said everything – what an amazing evening! Totem by Cirque du Soleil opened in San Francisco last week and I took my mom, my 2 girls (6 and 8) and my husband to the premiere. First thing I did when I got home was to Google “Olympians Cirque du Soleil”. That’s how good the performers are – what they do just doesn’t seem humanely possible. Totem is definitely a top notch circus show in that unconventional Cirque du Soleil glam-steampunk-world way. Take the kids!

Spectacular. Really. We all had our favorites and ironically they were almost identical! My girls’ favorites were the Crystal Ladies and their sparkly material spinning act, as well as the Trapeze Trio and the Unicycles and Bowls. They really enjoyed the clowns too and laughed hard on several occasions.

I’m usually not a clown fan but the sad clown who rowed on a boat to catch some fish and ended up pulling a giant plug emptying the sea – that guy was hilarious. The “Italian” macho skinny guy was very funny too though as a parent, I would have preferred less sexual innuendo in his pantomime.

Us adults were blown away by the Fixed Trapeze Duo (the photo I chose at the top of this post), an act that was both completely novel, funny and poetic. The mini-roller skating rink was also quite stupendous as well as  the Hoops Dancer (my husband’s favorite).

In the non-physical category, we were all floored by the magic and beauty of the glow-in-the-dark juggling act with the guy in Victorian scientist costume. Hello Jekyll and Hyde fans! He performed in a human-size beaker and when we thought the bluish balls flying around the clear walls in the dark were a treat, the balls started changing colors. Wow. Can you do that again please? The trailer below will give a brief overview of the prowesses you’re about to see.

“Mom, do you think we’ll see anything that’s happening on the other side?” That was the initial reaction of my 8-year old when we took our seats in front of a giant fabric turtle blocking the whole stage. She breathed a sigh of relief when the canvas was lifted to reveal a jungle gym skeleton structure and squealed at the visual effects on the “marsh/beach” slanted area connecting stage to backstage. The sets definitely gave a more theater feel to the show, something the kids enjoyed.

The costumes and make-up were beautiful, covering a wide range of ambiances from the Bollywood glitzy to the Native American symbolic, the earthly African savannah or the futuristic Moebius-inspired Russian acrobats. Not a dull moment on stage!

The show is self-described as “a fascinating journey into the evolution of mankind.” If you want to understand how the acts are connected to the storyline, by all means get a program. I didn’t and a week after the show, I still have no clue what the possible links could have been. That’s fine – not  knowing takes nothing away from the beauty of the show but if you want the deeper meaning, then the program is a must. I doubt the kids will insist on knowing the story. The show is riveting enough without the subtitles.

As much as possible, get seats facing the stage not on the sides. Most of the show group scenes are best seen only for the front audience. If like us you sit on the sides, well, you’ll only get a slice of the scene. In terms of high or low, I think higher seats would be better for kids, particularly smaller kids, because a lot of the action takes place in the air.

Abysmal and expensive. For a show of that quality and price I was expecting better snacks, not your local movie multiplex selection. Just popcorn, pretzels and hot dogs? With prices through the roof and no healthy kid option, I say – eat before and BYO intermission snack!

On the upside, adults can enjoy a cold beer or glass of champagne during the show since drinks are allowed in the tent. It really makes you feel like you’re out without the kids. On the downside, when your neighbor accidentally drops his cup of Coke between the seats, you’re in for wet sticky socks. Yes, cup holders would be a nice extra touch.

Based on the fact that:

I’d say – this is not for the preschool crowd. But guess what? There were babies in slings as well as a handful of toddlers at the show. What do I know? All I know is that my kids at age 3 would never have been able to sit still a full 2 hours and 30 minutes.

One thought on “Review: TOTEM by Cirque du Soleil”