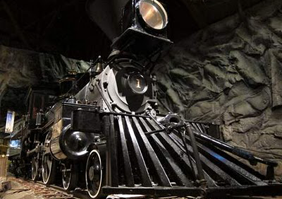 In Old Sacramento lies a train museum where children can hop onto a sleeping car that rocks to the sounds and lights of a 1950s late-night train, play out their train fantasies on a big-scale Thomas the train set, walk inside a train post office or explore reconstructed train tunnels and depots from California’s yesteryears. No wonder the California State Railroad Museum is a must-see destination for local schools and train enthusiasts.

A museum that includes 225,000 square feet of locomotives, cars and landscapes, and that organizes weekend steam train excursions along the Sacramento river from April to September deserves more than a visit on the fly. It should get your undying gratitude for prolonging the life of the American railroad dream – it’s virtually a train set ready for filming your wildest Gold Rush movie! Actually, the reason all trains are on tracks is that they can all roll out of the museum for filming purposes. Pretty cool, right? Well then, no reason to delay. All aboard and enjoy the ride!

When we visited the California State Railroad Museum last month on a rainy week day, we thought we’d have the museum to ourselves. Weather was gloomy and drizzly, snow fell by the truckload on Tahoe, and we needed to find an escape for our girls who were getting all cabin-fevered. The museum was just what we were looking for: hours of indoors fun, enough space to run around if needed, wooden benches to sit down and relax, shiny metal eye candy and miniature train sets for the young at heart.

Past a room of vintage toy trains, the first big display shows a Gold Rush scene complete with a covered tunnel, a canvas tent settlement, rocky mountains ready to be blasted away and engineers at the ready. It is simply awesome and we immediately heard a big “Wow!” from our girls. I thought the same wow too. This part of the museum is as close as a film set as it will ever get.

I didn’t expect my girls to notice the display  on Chinese laborers but they couldn’t help wonder: “Mom, what are the Chinese people doing on the mountain?” Well, kid, they’re getting ready to blow up the mountain with dynamite. “But it’s dangerous!” Yup, it is. “They could get hurt!” And so they did. I’m not one for sugarcoating history and I’m glad the train museum shows the reality of the Gold Rush with its dangers – and rewards.

As you emerge from the dimly lit room, the vast street-level exhibit hall is an open door into a world of possibilities. In front of you, 21 locomotives are standing on tracks, the same tracks that were used to bring them inside the museum. Some of the trains like the yellow one are right next to a small station with wax station attendant telegraphing text messages, wax women waving out of second-floor windows or wax cats sneaking out on the roof.

A group of 4th graders zoomed by us and walked inside a waiting room where a train station controller figure was sitting on a bench – an old man with a gray beard and a straight face. “How ya doin’ homey?” went a girl, making funny faces at him while others were snapping shots with their iPhones. Way to treat the oldie, I thought.

Next thing I knew, all the kids screamed and the girl fell back on her fanny. The figure wasn’t a figure at all! He was a docent dressed in a costume and as he rose from the bench  to shake her hand, created quite a stir. Ha ha ha, well done grandpa! He sat back on the bench and the still-shaky tweens scampered away. Apparently the docent had rehearsed his skit because we heard another scream not a minute later.

At the end of the yellow train, groups of kids were striking poses in front of big locomotives “a la Flashdance.” True, the wax figure of a 1940s female worker was a tempting backdrop. We walked around a small wooden station and I saw an old guy looking down on an open book. Was he for real? I got closer and he looked at me, “Can I help you?” Dang, now I had to think of a question. Yes, well, what time is it? “It’s on that clock,” he replied, pointing at a big clock. I thanked him and walked away.

“Why did you ask about the time?” asked my kindergartner. That was a darn stupid question, I always wear a wrist watch. Just because would only lead to more questions. “Look, you can climb up in the locomotive!” I said, pointing to a big engine next to us. 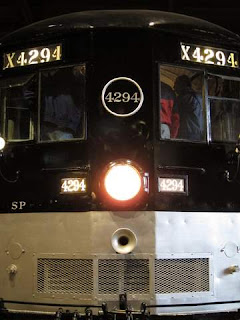 The diversion worked and my girls ran up the stairs to the locomotive. What a beautiful machine it was. Beautiful and shiny and massive, headlight on. The inside was crammed with people waiting in line to take pictures of their kids at the wheel, or pulling on a cable, or blowing on a whistle. It’s the 1901 Southern Pacific Cab Forward No. 4294 whose cab design allowed for better visibility in sharp curves.

To give you an idea of size, here is an interesting little photo, the kid and the train.

To me, part of the trains’ appeal is the monumental size of these machines compared to, say, a car or a bus or a tram, all of which kids see regularly on San Francisco’s city streets. When you take them to see a train (here or in the Santa Cruz mountains, in Sonoma, in Suisun City or in Jamestown), kids get exposed to something that’s mostly out of sight in our daily cityscape and a reminder of days when people traveled at a slower pace – and watched the landscape. Even writing this I’m seriously considering a train trip down the coast to San Diego.

Oops, I got sidetracked. Back to the museum where we continued our exploration.

The Fruit Growers Refrigerator Car was a fun walk through with wooden boxes stacked inside and an icing dock, but my girls’ favorite was the Dining Car No. 1474 Cochiti, a bullet-type diner-dining car showcasing menus, china settings from the museum’s collections, and a docent dressed as a butler. Since you can walk through the entire car and gaze at the various china designs (Santa Fe, Rockies, Western National Parks…), it was very popular with visitors and we had to get in line to enjoy it.

Next to it is the killer sleeper car on a rocking mechanism, a car where you actually feel like the train’s zooming past stations and rocking you to sleep at night. Berths are made-up with white linen and beige blankets, a passenger is fast asleep in his compartment, the rhythmic clicking of the wheels is interrupted by the occasional whistle – it’s a sensory experience.

Other cars nearby can be viewed from the outside, showing kitchens that look like home kitchens, or kitchens that look like industrial kitchens, or Victorian lounges with tea sets that are worthy of westerns. The visual treats don’t stop on that floor. When you’ve had your fill of oversize engines, climb to the second floor of the museum where everything is miniaturized and kid-sized. For children, this is the real fun.

When I purchased our tickets, the cashier had whispered to me: “There is a Thomas the Train room upstairs. Don’t tell them now.” Oh I understood well enough. Once they were in that room dedicated to all things Thomas the Train, it was very hard dragging them out.

One of the displays was especially fun as it consisted of an elevated oval train set mounted around a clear plastic bubble where kids could poke their heads and watch the train go choo-choo from inside the loop.

All the second floor is dedicated to miniature trains, in particular Lionel trains, and several big scale train sets with buttons to push had the kids drool with envy at the engines in motion. From toddlers to school grade kids, they were all captivated by the small trains. Who wouldn’t? Some are such exquisite mechanisms with tons of details, it’s hard not to stop and start scrutinizing them from every angle.

This was the last stop on our tour, until we exited through the museum shop … and purchased a few toy trains for my nephew. Great museum!