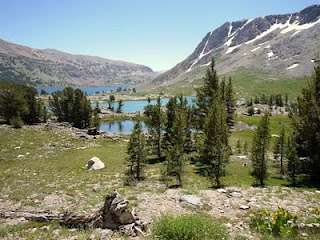 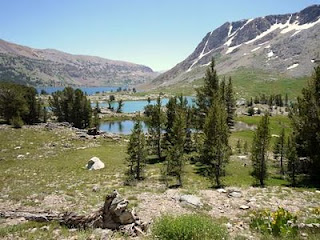 Right outside of the Yosemite National Park‘s Tioga Pass entrance is one of my favorite Eastern Sierra hikes. With easy access off highway 120 going down towards Mono Lake, Saddlebag Lake offers a scenic 5.5-mile loop in the Twenty Lakes Basin featuring vibrant wildflowers, high altitude lakes and a mineral world of stern granite beauty. Saddlebag Lake is also the entrance way to the Hoover Wilderness in the Inyo National Forest, an incredibly rugged area of alpine landscapes featuring deep canyons and peaks reaching for the sky. 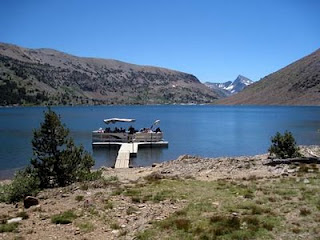 I first hiked at the loop at Saddlebag Lake in 2002 and remembered a smooth succession of pristine lakes, some sky blue some silver grey, with anglers catching trouts in half of them. That was before kids and my husband and I added 3 miles to the hike by walking along the edges of Saddlebag Lake to the trailhead, a rather boring narrow trail. Last weekend I was camping with my father and my kids at Tuolumne Meadows, a proximity too tempting to resist. I decided to hike at Saddlebag Lake again but in the spirit of survival of the youngest (5) and the wisest (70), we took the water taxi. 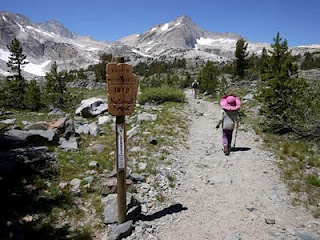 The water taxi runs every half hour so we didn’t have to wait too long after we got our tickets at the store but since we got a late start, it was already 12.45pm when we got to the other side.
Our return tickets indicated 3.45pm which in theory was OK for 5 miles with 500 feet elevation gain except… snow-covered trails, tricky creek/rock crossings and a temporary off-routing through Lundy Canyon converted the last two miles into a rabbit race. 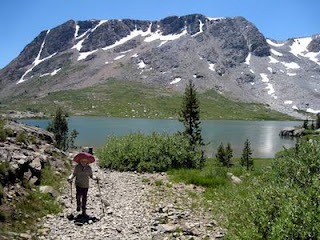 Starting off at the trailhead (altitude 10,000 feet) was straightforward. We saw two people walking with fishing poles and simply followed them. No, in fact I remembered doing the loop clockwise and the trail follows the north-western tip of Saddlebag Lake so we followed the people anyway. At the wooden sign, you officially enter the Hoover Wilderness – gotta love these retro wooden signs. 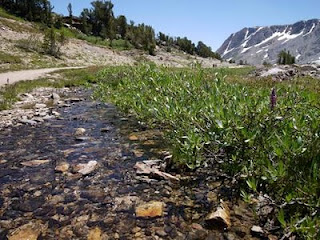 Visual rewards came almost right away much to my dad’s satisfaction. The first lake appeared on our left 10 minutes into our hike. Greenstone Lake, a lake whose blue waters reflected cloudless skies, filled the bottom of a glacial circus towered by North Peak at 12,000 feet. A+ for the “wow” factor. 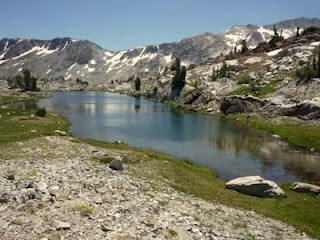 A hill above Greenstone Lake was filled with another smaller lake and the juxtaposition of the two lakes with Saddlebag made the photo at the top of this posting.  Three lakes on three levels, that’s heaven for me. A trickle of a brook turned the trailside into an inviting bird bath and my girls changed into swimsuits to refresh their feet. Why did mosquitoes materialize out of nowhere? Nasty little blood suckers. Suffice to say, we didn’t stay long. 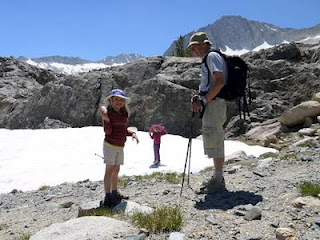 Ahead of us were the long and lean Wasco Lake (angler’s hangout) and bigger Steelhead Lake into which a waterfall gushed, fed by snowmelt coming from glaciers above. We saw people sitting on the shores of the lake. They were just enjoying the scenery. Blinding white under the sky, big patches of compacted snow looking like wet sugar appeared far from from the trail; then next to the trail (snowball fights); then on the trail. 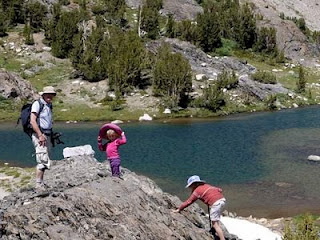 Between Steelhead Lake and Shamrock Lake, the trail also disappeared in a pond and had us take the rocky route instead. Adventure was calling, we were now using hands and feet! By then we were still on the trail, easy backcountry crossing but my map did not show the trail heading north-east to Shamrock Lake. Too bad. We simply followed a well-marked path and missed a short steep section that could have led us to the abandoned Hess Mine.

Getting to Shamrock Lake required crossing the creek on a log, which added spice to the new lake discovery. 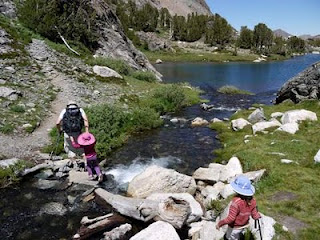 However right after the crossing, the trail rose and rose and rose until we were treading piled rocks. More spice! One fall. Ouch.
What a sheer delight Shamrock Lake was, though. With many nooks and crannies, the water occasionally encircles tiny rock islands dotted with gnarled whitebark pines and spreads into rough coves with weird shapes. The view from above (now the trail was definitely higher) was one of the best high sierras views ever. 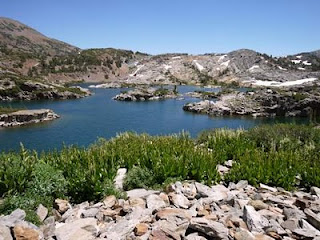 From then on, the trail was visible on and off because of snowy patches but cairns guided us (roughly) through rocky slabs, meadows and ponds. Lake Helen came as a surprise to us. I know, it shouldn’t have, but my map, well my map was incomplete. My USGS topo map of the Tioga Pass Quadrangle dates back to 1995 and doesn’t have all the current trails. Also, the hike bites over another map in the top right corner so Lake Helen, the northernmost lake, is outside of my map. Bad luck. It could have been a minor detail since there’s only one trail anyway but then we came to the marker “To Lake Helen.” Whatta? Since we didn’t see any other trail, we just kept on but my confidence in the map had been shaken – not stirred, just shaken. That’s when I goofed up. 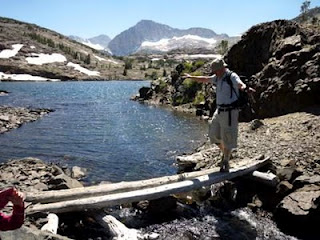 At the end of Lake Helen, we climbed down a big boulder (sort of not so safe for the kids but I couldn’t see another way down) to cross Mill Creek on two logs. A wooden sign indicated Lundy Canyon on the left, Saddlebag Lake on the right. What was I thinking? We turned left and started going down towards Lundy Canyon. I knew that this was a Saddlebag Lake loop but I nonetheless led everybody left.
Now, Lundy Canyon is not the piece-of-cake of canyons. It’s not a canyon for the preschool set. 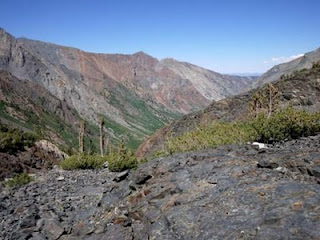 It’s a big deep canyon whose metamorphic rock walls dive down three thousand feet to the floor of the valley where beavers frantically build dams on the creek underneath aspens. It’s BIG! Clearly, I didn’t remember that part rom the previous hike.
That’s when my dad, a geologist, turned to me: “Are you sure we climbed down that much?” Aha moment. We got the compass out, check the map (and the missing corner where we were standing). “Everybody turn around!” The girls didn’t like that. We turned back anyway. Now the clock was seriously ticking. We had 45 minutes to make it to the boat, roughly 2 miles to cover up a narrow gorge, around two more lakes, in and out of hills until Saddlebag Lake. We ran! 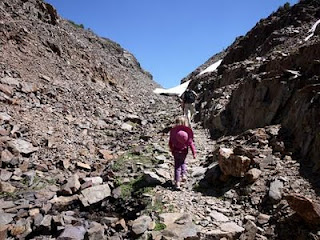 After the little one tripped, I carried her on my shoulders for a while. The older one tripped too but she’s an experienced hiker so could progress without help.
After each new crest we thought we’d be there for sure but we weren’t. In hindsight, doing the hike counterclockwise would get this section out of the way early and reserve the better sights for a smooth ending.
When finally we saw the big blue expanse of Saddlebag Lake, I made sure the boat was still there and shouted “The boat’s still here!” Totally pumped up, my two girls, my dad and I ran to the boat. Right after we hopped aboard they revved up the engines and left. In the nick of time! 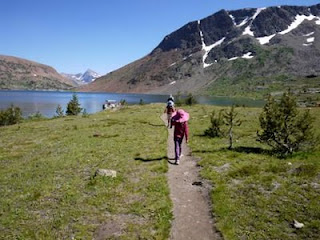 As a reward for everybody’s efforts, we drove back to the campground through the Tuolumne Meadows store and treated everybody to ice cream. They even had my favorite, Haagen Dasz dark chocolate in and out. What a hike! We all slept very well that night.
Note on maps: The loop has only two markers along the route so an up-to-date map (like this one, with more topo detail) will come in handy.