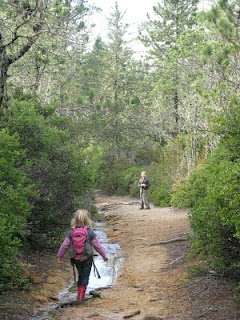 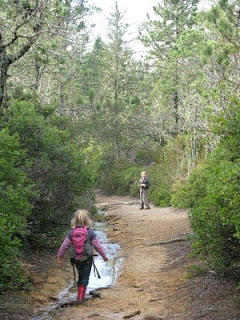 There is a pygmy forest at Salt Point State Park between Jenner and Mendocino. Pygmy as in dwarf coastal redwoods, pines and miniature cypress trees. Pygmy as in too much salt and iron in the ground and not enough nutrients for the trees to grow full size. Pygmy as in large slabs of graywacke sandstone 18 inches below the ground and hardly any room for a root system to develop. This forest grows on an ancient seabed, an uplifted marine terrace that’s now lush hills and slopes. And it’s only a few hundred yards from a pristine rugged coastline where waves batter the shore with loud resounding booms. 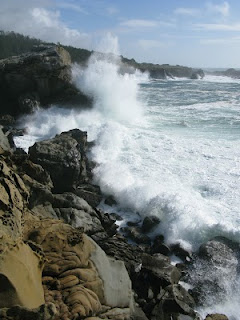 We visited the park after two weeks of rains and some of the paths were still interconnected puddles – to our daughters’ delight. Salt Point SP may not be the star of the California state park system but it features one of the only underwater reserves of California, a bull kelp forest, grassland, forests and a Rhododendron reserve – plus beaches and shoreline. Pretty good if you ask me. 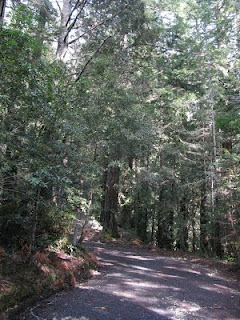 Unforunately as a “minor” park with low frequentation numbers, Salt Point SP has suffered from budget cuts. As we stopped to have lunch along Gerstle Cove, we noticed that the visitor center was closed and the restrooms too. We couldn’t find a brochure with a map for the hike we planned so we photographed the visitor center’s map. One of the day use areas in closed this winter. We would have loved to ask a ranger some information but there was nobody in sight. Granted, rare visitors does have its advantages. We didn’t fight to park the car at the trailhead and didn’t meet a soul on our 5-mile hike. If we wanted to be away from it all, this was the place. 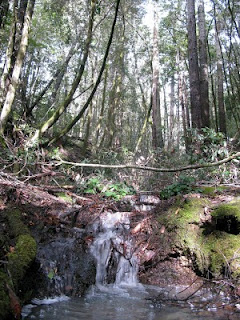 Starting on Central Trail next to the ranger station, the path is wide and rises through groves eucalyptus trees, Douglas firs and tan oaks. Trailside, gorgeous red branches of madrones were covered in white bell-shaped flowers ready to bloom for their springtime show. In the summer, they would be replaced by clusters of edible berries.

As we went up the trail – it rises steadily over 2 miles or so – we heard water trickling down the forest on all sides. Sure there were creeks indicated on the map, but these gurgling brooks were the result of the storms. We were glad we saw the forest just then, as oposed to at the end of the dry season. 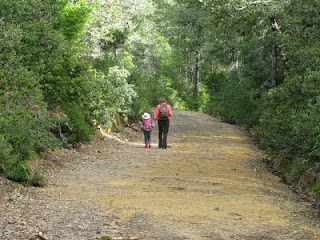 The trail was occasionnally interrupted by interpretive signs about the local flora and the Kashaya Pomo uses of the plants. The one on the sour face game was particularly fun. It’s about a berry bush that produces sour berries that make you cringe. Kashaya Pomo children played at who would eat the most! Our children loved going from one sign to the next. 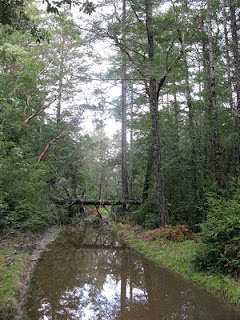 We passed the four water tanks that store the park’s water supply for the year and continued in the direction of the prairie. I was fascinated by the idea that there could be a prairie amidst this dense forest. I’m so used to coastal forests barely letting the sun go through.

However right in the middle of the trail – or should I say, over the trail – was a pool-size puddle blocked by a fallen tree. One of us had rubber boots, the others not. We decided to give it a try and negotiated our way in the somewhat dry thicket until we could just hop quickly to the other side of the stump and cross over. Done. 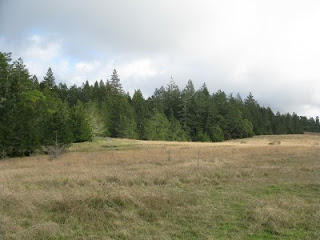 We were free to go on to the prairie which was straight ahead. And what a prairie it was. It was lovely – wild west style and all.

Bordered by tall pines, its center was covered in yellow grasses that sway gently in the breeze. If I blinked to see far enough in the distance, I could discern a low-rolling fog licking the slopes of deep green hills. We walked a while along the prairie, just taking it all in, savoring this tranquil place that only wild hawks swooping by disturbed. 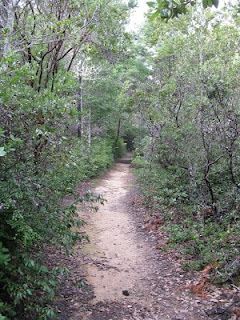 At the junction with Prairie Trail that would have taken us towards Plantation, we decided it was time to go back if we wanted to see the pygmy forest. We had no idea how much hiking time the other trail entailed so we turned around. Vaguely watching the ground for sneaky puddles, I saw a flash of Granny Smith green jump in front of me. It was a tiny frog, lean and lank and jumpy. It wouldn’t stay in the cup that I held to show it to my girls so we let it jump away from us, watching it regroup under sunken leaves before hopping to a new hideaways. 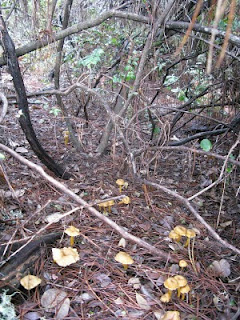 Soon enough we saw the trail we had missed on the way in (it’s a pretty sharp curve coming the other way) across from the sign that says “Prairie” and veered right on North Trail, the top of our ascent. From now on, it was only going to go down. The vegetation changed abruptly and before we knew it, we were in mushroom country.

Salt Point State Park is a popular hangout for mushrooming enthusiasts.For a good reason. It’s the only state park that allows mushroom foraging in California. Naturally, mycological societies from all over and until the Bay Area plan big parties there. Except we weren’t privy to the world of Salt Point mushrooms so we just admired their shiny caps, fancy colors or slimy appearance. 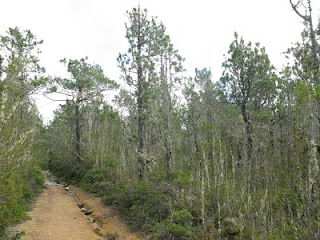 How I wish we were surrounded by mushroom experts though. I love eating mushrooms and I hear the area even hides heavyweight boletus edulis above the two-pound mark. If you do go there with mycological afterthoughts, note that there is a five-pound limit to your collecting zealotry. As for us, we played I Spy a Mushroom during a pretty long time, almost forgetting that we were actually crossing the pygmy forest. 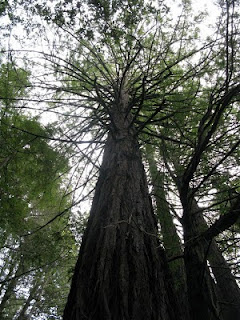 The trees of the pygmy forest were not as small as I anticipated but they were definitely smaller than the earlier forest. Our girls had envisioned a knee-high forest and were disappointed the trees were still taller than them. But hey, these trees are several centuries old and in fact not so tall at all. We could definihtely see more sky around us. Also, they looked like they had suffered from acid rains with their sparse silver leaves and short branches. At that point, the soil is part sand part clay and with the rain, some patches were slippery so we watched our step.

Beyond the pygmy forest, we entered a full-grown forest with normal size coast redwoods and more mushrooms. There was a majestic coastal redwood feel all around, with very little underbrush and a slightly green light accented by the mossy trunks. 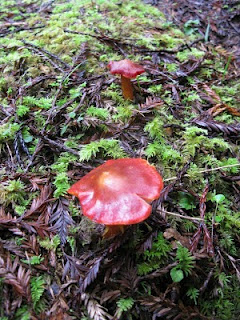 From there on, it was an easy hike down the trail. So easy that our girls occasionally broke into races from big tree to big tree to hollow stump to big tree. We followed Warren Creek to our left and passed the trail that goes to the water tanks. We made it to Huckleberry Trail and made a left to come back to the trail head.

Of course on the way, more mushrooms crossed our path. Makes a girl think. It might be time to join a mycological expedition. How would they taste, I wonder?

The high point of our hike to the pygmy forest ended up being the prairie, with the mushrooms a close second. You just never know what the trail will offer.

One thought on “Salt Point State Park: Hike to the Pygmy Forest”