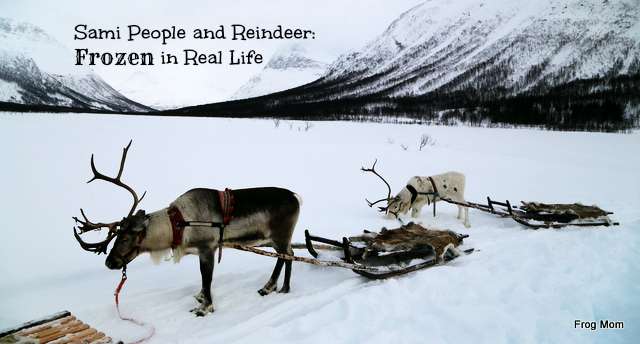 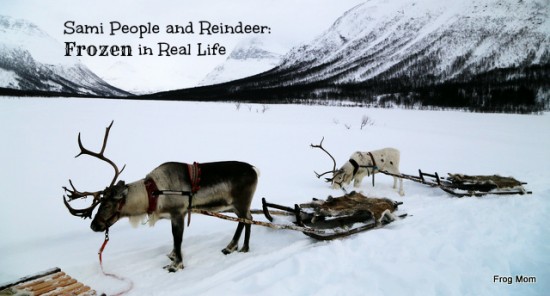 Would you like to build a snow-reindeer? The movie Frozen introduced the Sami people and their culture to the world with a bang. Kristoff, who goes around with his beloved reindeer Sven, is a member of the Sami people. Though the movie sparked a few controversies in how the Sami are represented, it also features a beautiful opening score written by a Sami musician and borrowed many art elements to the native Sami culture. Now, for kids to see the Sami people and their ancestral lifestyle beyond the silver screen is an amazing eye-opener. We were lucky to share a day with a Sami couple and their reindeer in northern Norway and it was a huge hit with my girls.

If the name Sami is not familiar, their English name will. They are also known as Lapps and Sapmi, their cultural region, as Lapland. How we came to meet them and learn about their culture was a surprise. While in a remote camp outside of Tromsø, 217 miles above the Arctic Circle, we had signed up for a half-day of reindeer sledding with Lyngsfjord Adventure. We knew that we would be transported on a reindeer sled and learn about Sami culture and history, but we had no idea that this activity would actually be led by Sami people. Naively, I didn’t expect an adventure travel website to partner with a native people known for their ancestral lifestyle.

In fact, modern Sami have totally embraced new technologies and use modern commodities to their advantage. 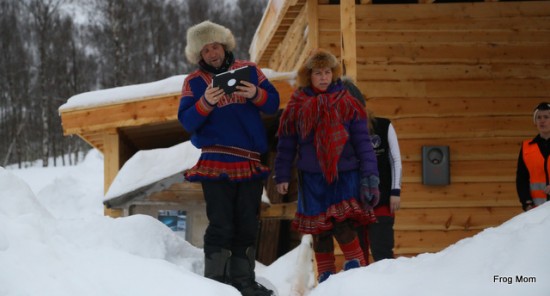 Here are our hosts (his name is Roar, I don’t remember his wife’s name) calling our names at the camp in the morning, checking the list on their iPad. They were tallying up numbers to drive us to their Sami camp in a minibus. Our girls, being the only kids, were lucky to hop on the man’s snowmobile for the ride.

Only five minutes away, the Sami camp was a large snowy plain with a reindeer pen and a lavvu, the Sami traditional tent. Reindeer! We were like children in a candy store and literally ran over to the reindeer pen to take pictures. 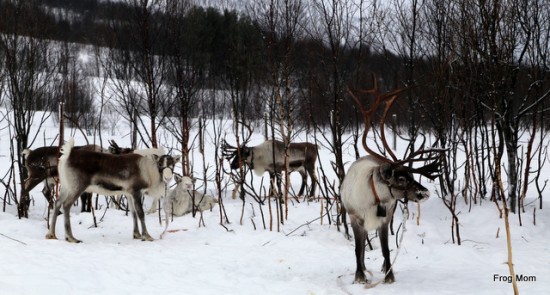 My girls (and everybody else, to be fair) were going “Awwww, so cute!” and what have you. True, reindeer are extremely cute animals with big eyes and eyebrows and the softest looking fur. They were different from all the other reindeer I’ve seen, at Disneyland or at the San Francisco zoo. They were bigger animals and looked sturdier too. We could have turned around at that point with an intense feeling of accomplishment but happily, this was only the beginning. 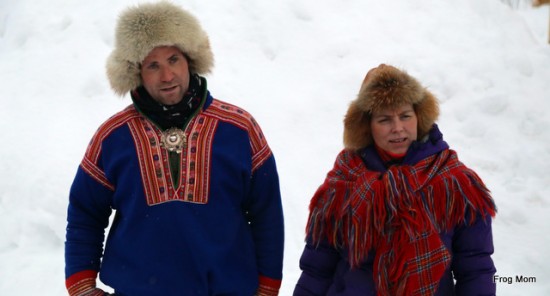 Roar explained to us how the morning was going to unfold. He and his wife were going to take turns leading us on reindeer sleds and taking us inside the lavvu to talk about Sami culture. But first, we needed to feed the reindeer and choose which animals were coming with us. By the way, do you see how beautiful this couple’s clothes are? They were handmade by the wife and she also handmakes their reindeer boots. Wow.

We were allowed to enter the reindeer pen and the wife brought a large trash bag full of something that looked light. She opened it and the reindeer flocked to her. 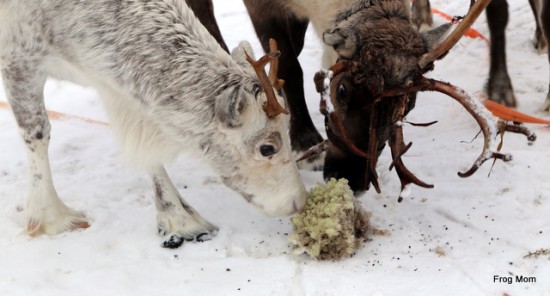 Lichen! If you ever need to find treats for a reindeer, it’ll have to be lichen. They went crazy for the stuff. More lichen landed on the snowy ground and the other reindeer joined in the snack break. Intrigued, I asked the wife what kind of lichen it was. “This kind,” she said. “It comes from the mountain.” She motioned to a mountain far far away. “I go there in the summer to harvest lichen and it keeps very well in bags through the winter.” Of course, everything is frozen outside. It makes lichen storage easier. I was also amazed at how well this couple spoke English. They speak Sami at home, Nowegian in the village and English with tourists. What linguists! 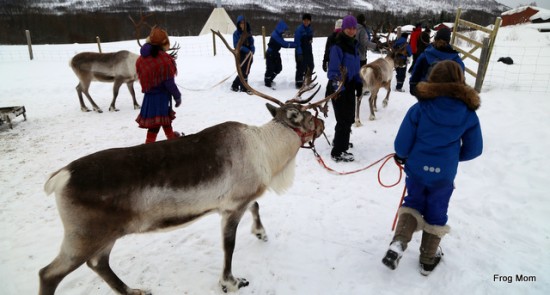 A few of us were invited to lead reindeer by the rope outside of the pen and my 9-year old was only too happy to volunteer. Rarely does she step in front of the crowd for activities but she was very motivated to exit the pen with a reindeer behind her. Next, Roar harnessed each of the 6 reindeer to a sled and he shook off snow from reindeer skins covering the seats. 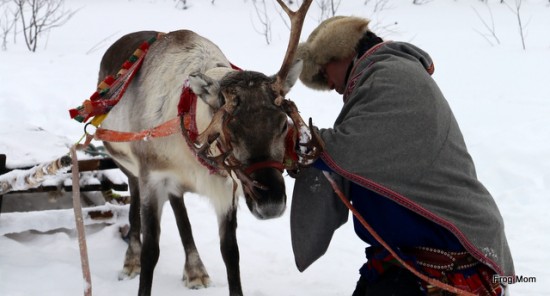 We were ready to go. Part of the first group, we chose a sled or rather, we chose a sled based on the looks of the reindeer. My 9-year old went for “her” reindeer of course. We forgot the reindeer’s Sami name but as Roar’s wife explained, they all bear names based on their physical features. Shockingly, it’s neither Rudolph, Dancer nor Vixen:) We hopped on the sleds in pairs and off we went, led by Roar through the snowy valley. 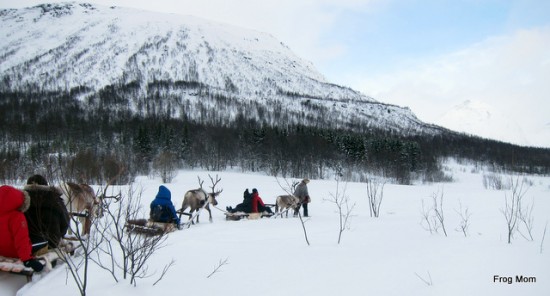 The gentle pace allowed us to fully admire the majestic mountains surrounding the valley floor, massive hills covered in snow, bare black trees and icicles. That’s us on the sled. 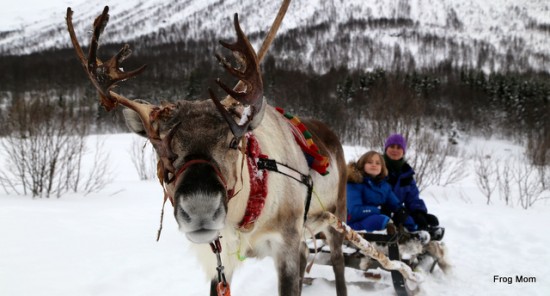 We paused at the middle of the valley at the edge of a frozen lake that we couldn’t see. “The last sled is actually on the water,” said Roar. Indeed, no plants or bushes grew over a large oval area. 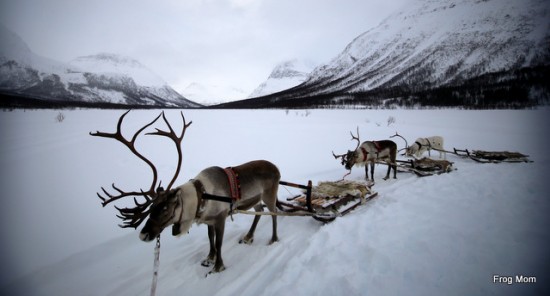 Back at the Sami camp, we left our reindeer sleds to the other group and were happy to take shelter from the cold in the lavvu. 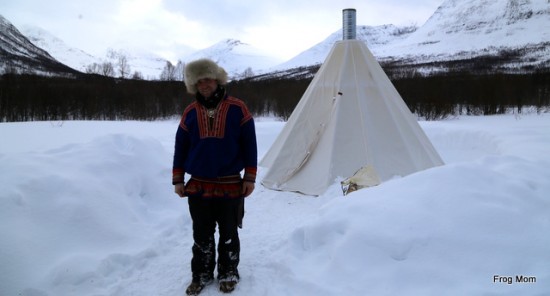 In the middle, a wood-fired stove kept the lavvu warm and we all sat in circles on an elevated wooden platform protected by reindeer furs. Oh, it felt so nice to stretch our snow boots and dry our hands close to the metal grate. 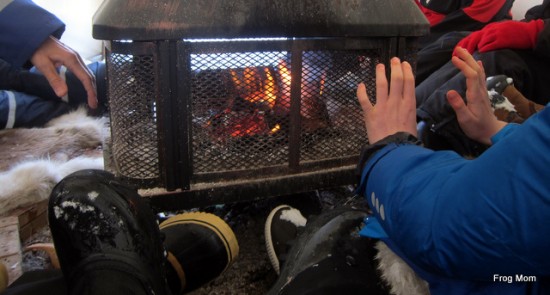 It was fascinating to hear Roar talk about reindeer herding, the center of Sami lifestyle. In this short video, he talks about reindeer and children birthdays, a topic dear to my girls’ hearts. He starts talking about rounding up adult reindeers and newborns after the summer.

It was a bit heartbreaking when Roar talked about the choice that teenagers have, towards the end of the video. At age 15 with a small herd, they can decide to sell the reindeer to the slaughterhouse to have a lump sum of money to start life, or to start herding their reindeer. It takes a special kind of 15-year old to decide reindeer-herding in the Arctic wilderness instead of studying and partying in the city. Tough choice.

In the winter when we were there, Roar’s family herd are watched by his father-in-law up north in territories with no cell phone reception. It’s so remote that Roar and his wife don’t even know when the herd is coming “down.” Extraordinary, isn’t it? In the spring, the herd comes down to rich summer pastures on the coast. They even board a ferry to cross a fjord and avoid a full day of walking. Must be quite a sight. I made the mistake to ask how many reindeer can board a ferry. “That’s like asking me how much money I make,” answered Roar with an understanding smile, used to the question. “Our reindeer herd represents our wealth. We don’t say how many reindeer we have.” Point taken. Don’t ask about the size of the herd.

For people like us used to fast transportation, it was incredible to hear that the trip south takes a full month on foot and the trip north in the fall takes 2 to 3 months – on foot also. This takes slow living to a much higher degree than any of us could imagine. Sami people are modern day adventurers, although I don’t know how they would feel about the designation. It’s how they live. Period. It’s how they live and yet, their children are not so keen on pursuing a lifestyle perceived as  harsh with an only irregular source of income – reindeer.

It’s not all hopeless, though. Roar’s kids go to the village school in traditional Sami clothing, take Sami language classes and eat all shades of reindeer through the year (even if they prefer pizza). Influenced by their peers, they might turn from the Sami lifestyle when they grow up, and perhaps they’ll come back to it. Roar had worked 10 years in the city in a plastic factory, lived in a western house, earned a monthly income with his wife. And yet one day, he yearned to return to his roots and quit the city job to become a full-time reindeer herder. He also does tourist activities like ours, but his real life passion is the reindeer. Perhaps that’s the future of Sami people, those who start their professional life elsewhere and feel deep in their bones that they belong with their Sami upbringing and reindeer. Wouldn’t that be great?

When we heard the other group come back outside, I was disappointed that we didn’t get to learn more about this man. It was like a spell broken too early. We just loved listening to about this way of life so far from ours. But hey, it was time to learn how to throw a lasso. 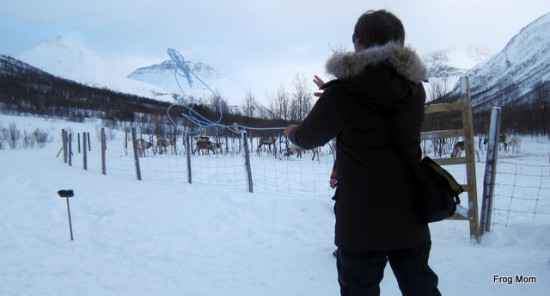 How else do you catch a reindeer when rounding up your herd? That’s correct, lassoing it is. “I practiced on my children when they were young,” said the man jokingly. “I asked them to run around me in a circle and tried to catch them. If I didn’t, they had the right to try to lasso me.” Way to teach children about ancestral skills!

Lunch time, it was time for us to head back to the camp. My girls got one last snowmobile ride with a smile. 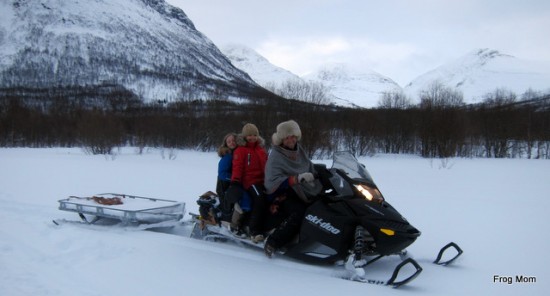 If I have one suggestion, it’s that this activity should not be advertised by local guides as “reindeer sledding” but rather as “reindeer sledding with Sami people.” To me, that was the most important part of the day and I’m thrilled that we got to take a quick peek in the real life Frozen people.

Thank you to this man and his wife for sharing their culture with us.

Did you like this story? Have you ever had the opportunity to learn about other cultures and be moved by it? Please share your experiences below.