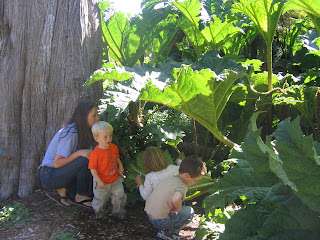 The San Francisco Botanical Gardenis a serene place to spend the end of a sunny day. Since it’s not a hot spot that opens new attractions like you snap your fingers, no risks of crowds between the greens. The public is a mix of chatting highschoolers, strolling parents and sunbathing singles. We were part of the strolling parents, meeting Cath and Danny with Alex and Evan. Clearly a scientific expedition.

After a flash visit to the garden of fragrance, it was obvious that both Louise and Alex only wanted to play hide and seek, while Evan wanted to push his stroller and Iris desperately wanted to replace him. So on we proceeded to the big ferns with giant leaves in the primitive plants section. The pond and its ducks, trouts and turrtles was our next big stop, before we came out through the library exit.

Now, one of the oddities of the library exit is a short wall if old stones. Nothing to fuss about, apparently. Except these belong to the Cistercian monastery Santa Maria de Ovila in Spain. This actually comes as a surprise because San Francisco is not New York and nobody speaks of moving The Cloisters here. Bought by William Randolph Hearst in the 1930s, the walls of this abbey were supposed to become part of a big architectual fantasy designed by Julia Morgan called Wyntoon.

For several reasons, the stones never made it to Shasta and were gradually integrated into various structures of the Golden Gate Park: Japanese Tea Garden and the Botanical Garden notably.

Now the rest of the stones (or at least 20 truckloads of it) have made their way to New Clairvaux, a cistercian abbey in the Sacramento Valley that’s using them to build their chapterhouse. How funky. Only in San Francisco.