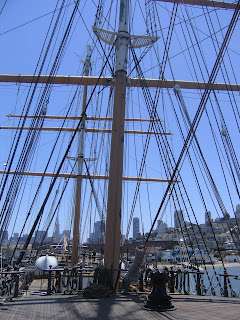 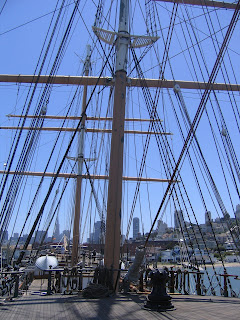 Now and then, I like to think of myself as a tourist in San Francisco and I head over to Pier 39.

On the face of it, there’s nothing worse than Pier 39. Any San Franciscan will sneer at the kitsch and nothingness of the place. There, you can embrace the usual “coastal town” tourist mix of fudge shops, street performers, hot bretzels and made-in-China souvenir stores.

However, the boardwalk and its tacky planters, the two-story carousel with scenes of San Francisco, the barking sea lions sponsored by Pier 39 all attract me. I’ve come to appreciate Pier 39 as an enclave in the city that serves tourists who take comfort in seeing like-minded tourists and locals who like to be reminded of San Francisco’s fishing past, something neither the Mission nor Laurel Village will ever be able to achieve.

As part of the fishing and sea-faring theme is the most overlooked museum in the city: the Maritime Museum. Why, 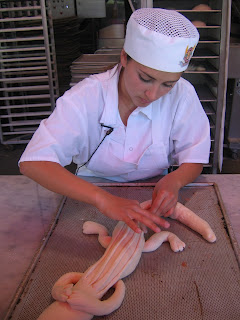 it’s more than a museum, it’s a national park! Stretching from the historic brick cannery warehouse to the Hyde Street Pier, the San Francisco Maritime National Historical Park has a historic collection of steam and sailing vessels ready for you to visit.

We were joined by Inga and Andrew, our infatigable coastal explorations friends. Before starting, there was an essential stop though: the Boudin Bakery flagship store at Pier 41. Children can stare for hours at the bakers modeling animal-shaped sourdough breads in the demonstration window.

Today was crocodile day, but we’ve seen teddy bears, turtles, crabs, lobsters, flower baskets and more at this window, seasonal shapes being just as fun. Up on ceiling cables, metallic baskets of freshly-baked breads glide around giving the place a clean Willy Wonka feel. I just love looking at the baskets traveling from the ovens to the bread counter and coming back empty. Surely we couldn’t just stop at the window. Andrew would have collapsed.

We had to get inside for a taste. As each of the three children asked for a miniature sourdough turtle, I chose a chocolate chip-raisin loaf and a multigrain loaf to take home. Now with bread in hand, we could head to the first ship on our list, the USS Pampanito. 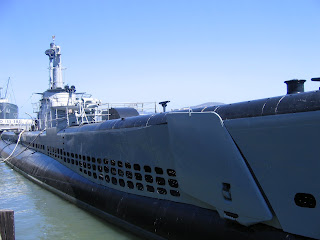 The USS Pampanito is a Balao-class submarine and offers the most wonderful educational opportunity as overnight encampment for school-age children. Imagine sending your offspring to sleep on one of the 48 bunks on a wartime submarine. How cool is that!! Just last night, a ranger told me they had boyscouts spend the night.

Our little ones though, are way too young to even think about it. They oscillated between downright fear and sheer excitement, running the length of the enclosed compartments and hardly paying attention to the torpedos, engines and officers’ quarters. Submarines are awesome. 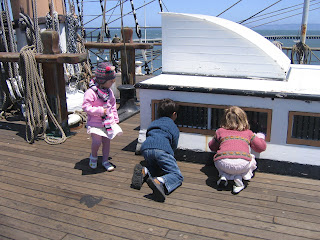 Next, the C.A. Thayer, the Balclutha and the Eureka, for which we walked to Pier 45. The C.A. Thayer is a schooner and as it is currently being restored, there isn’t much more to see than a barren wooden deck. The Balclutha however, is first class.

Formerly called the Star of Alaska, it is an 1886 square-rigged ship that saw the end of an era with the last sailing voyage from San Francisco to Alaska to bring back tons of canned salmon. As on the USS Pampanito, the children loved running up and down the steep stairs and up and down the galley, looking through windows and openings.

The Balclutha has been lovingly restored and features a re-creation of the life of all on board: the “China gang” who worked on salmons below the deck in miserable conditions, the sailing crew who slept in wooden bunks by the anchor and the lavish captain’s quarters in pure Victorian style (though today we missed it). It is quite a sight. 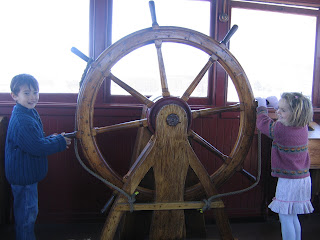 The Eureka was the last on our list and has some of my favorite items. As a paddlewheel wooden ferryboat set to transport 2,300 passengers, the Eureka is an imposing ship. It’s big.

It’s so big that it ferried cars on the ground deck. Today’s exhibits display an impressive array of old automobiles, trucks and carts, including a great old Ghirardelli wooden cart with the words “Chocolate, Cocoa & Mustard”. Andrew and Louise had a ball playing with the main steering wheel taking us to distant shores such as Georgia and New Caledonia.

Now, I’m dying to attend one of the monthly sea chanteys on the Balclutha. First Saturday of each month, 8pm to midnight on deck. Bring a mug for hot cider. That’s got to be a killer during the winter.