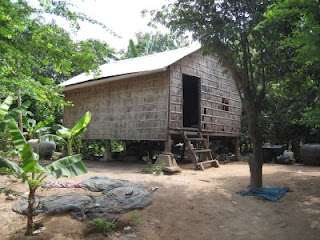 Curious to know how and where things grew next to Phnom Penh in Cambodia, I went with my girls and my dad to the rural village of Kadai Kanda, subdistrict of Sarika Keo on the Mekong River.

April is in full dry season and the fields we visited are usually under water in November. We were lucky to be there when field ploughing is in full swing and rice barely sprouts over flooded paddy fields. As we arrived by boat to Sarika Keo, the river was milky brown and murky. We promptly jumped on the shore and got to a little shack with a blacksmith forge overlooking the “pier”. The guy makes axes all day long with a makeshift oven and a hammer. My dad bought him an axe head last year but still hasn’t made the handle so it hasn’t seen much use.

We proceeded on the main street that runs parallel to the river. The village’s landmarks were right there: the school next to the wat (temple) and a buzzing street market on both sides of the dirt road. We saw small mussel-type shells drying in the sun on bamboo mats, chickens with their feet tied lying in the dirt next to their plucked unlucky friends, fishes being scaled with hard grates. I ordered a sugar cane juice for my girls as they’ve never tasted one before. Through a press the sugar cane went and the juice was squeezed out, while half a dozen wasps were zipping and zapping above the sugary leftovers.

“This is yummy!” I heard, to my satisfaction – and then “This is too sweet!” Sigh. Two blocks down the road, we made a right to go inland and get to the fields alongside a small river. The banks were pretty high and the water low, and the bottom was fish net to fish net all the way.

In the village, we had already passed several banana trees with banana hands hanging down – banana flower cut, the Khmers love eating them- dozens of mango trees and coconut trees ready for harvest. On the way, I was peeking into the houses over the bamboo fences when I saw something I hadn’t seen in a long time: cooking on wood-fired clay ovens in an open air kitchen. I asked to take a picture.

The woman was preparing lunch. In one pot, a soup was bubbling with chopped green stalks, two silver fishes whole and mushrooms. The other pot was chock full of steamed rice. I explained to my girls that this house did not have electricity and that lunch was cooked over a wood fire. They looked on but they probably didn’t get the “no electricity” part.

It’s very outlandish for them. A few houses down, a huge rattan mat was covered with rice grains drying in the sun, the husks still on. On we walked, til we came across a bare field with two oxens ploughing the soil.

We left the road to lollop in their direction, the uneven terrain peppered with cut plants, lumps of muddy soil and low brushes. The farmer was preparing his land to plant corn.

Right behind were other farmers engaged in the same activity as well as paddy fields and irrigation ponds. As I looked at the cityscape, I admired the beauty of the Khmer countryside with sugar palm trees fanning their wide green leaves and mango trees ladden with ripening green fruit. Of course if you come here during the rainy season, you’ll have to watch out as these fields are ridden with snakes of all kinds. Fortunately the only wildlife we encountered were big dark butterflies with hairy bodies looking like humming birds hybrids and big red lizards.

Back on the road, I kept analyzing the flora around us to know what was edible and what was not. I saw some vines with yellow round sorts of wild passionfruit (passiflora foetida) and remembered eating them in New Caledonia in my childhood. I confirmed with our Khmer guides and popped one open. Its sweet fleshy seeds were just as I remembered. Apparently, birds love those too.

Every here and there, orchards of banana trees alternated with fields of mango trees. Clearly, they are the main staples of local agriculture.

Curiously, papaya trees have fallen out of grace after last year’s abundent harvest literally flooded the market and prices dropped. After this bitter episode, farmers chopped down many papaya trees and we actually had to look for them which is strange in a country where papayas have always been part of edible gardens.

We could have walked on and on and seen countless fields. There was nobody but us on the dirt road and the sun was shining pretty bad. My girls started whining because it was “hot and dirty” and they wanted to go home. What about the poetry of fields my sweets?! Nope. All they wanted was to get back. We turned around and got on our way.

Our Khmer-Thai guide asked me a question. My spoken Thai is not nearly good enough and I thought I understood oh-so-perfectly so I said yes. When in doubt, I always say yes. He got on the phone. Ten minutes later, we heard the racing sound of motorbikes coming our way. “Oh,” I thought, “What are they doing here and why are they looking at us?” Ahem.

I had actually agreed to get back to the pier on moto taxis. There goes the confidence in my Thai verbal skills! My misunderstanding was in fact not such a bad idea because walking back would have taken at least 40 minutes and the little girls were getting tired and whimpy. I loaded them with my dad on the back of a bike and off they left at super slow speed on the pot-holed road.

I hopped on another one and soon enough, we re-entered the streets of the village. We zoomed by beauty salons, tailor shops in private houses with big hands of bananas lying by the entrance door, and bicycles. At last on the boat, we compared the color of our feet. I was by far the dirtiest, having walked quite a bit in the fields to get good shots of plants.

If anything, my girls learned where bananas come from. That’s already something. If on top of it they remember field ploughing or cooking on a clay stove, I’m happy.