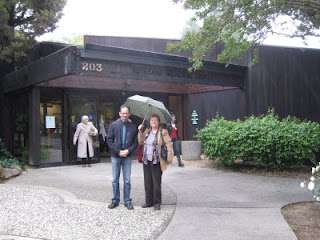 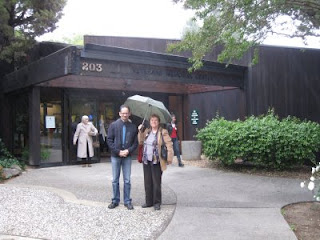 he SCBWI Davis Conference 2009 has come and gone. It was a long day and as expected, I feel galvanized to keep on writing and keep on revising.

The carpool experience to the conference was great as I got to know author Mark Elkin (whose book comes out next spring with Tricycle Press) and author/illustrator Lea Lyon (pronounce “lea” as in “tea”), also coordinator for SCBWI San Francisco/South illustrator events.

The conference started with Diane Muldrow, an editorial director at Golden Books/Random House. With humor and perspective, she introduced the Little Golden Books series as an element of post-WW2 Americana (25 cents books anyone?) as well as a living books series to which many talented 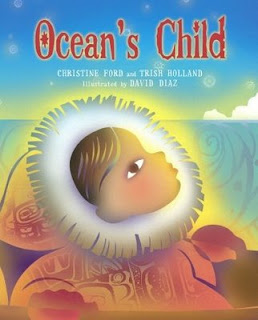 authors and illustrators keep contributing. As an example, she passed around several books amongst which the upcoming Ocean’s Child by Trish Holland and Christine Ford, illustrated by David Diaz, a gem of a book whose lyrical text is beautifully illustrated with Inuit-inspired art.

Presenting several books in the series, she explained the “Little Golden” feel of a book: a lively book for children who are more interested by the crane down the block than fairies and elves, an exciting everyday experience that’s new to a child. I’ll certainly look at Little Golden books with a different eye now. Honestly until yesterday, I had no idea new titles were still published.

Ms. Muldrow was followed by Chris Eboch’s presentation on virtual school visits, a most useful tool for auth 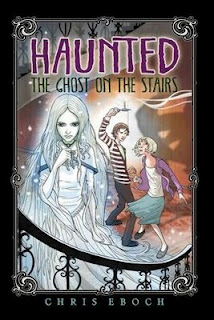 ors/illustrators who want to stay home and offer school visits at lower costs. Better get used to Skype!

I was personally interested in Ms. Eboch’s The Well of Sacrifice, a historical fiction novel on the Maya for ages 9-12 and bought a copy to read right away. Her upcoming series Haunted about ghosts also sounded intriguing.

There’s no book conference without online talk now, so Linda Joy Singleton author of the Dead Girl series (and other paranormal series) talked about online book promotion. “This whole online world is keeping me out there,” she said. As a matter of fa 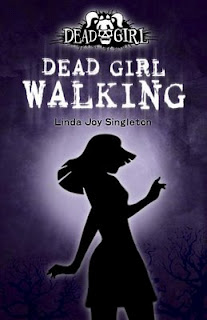 ct, she sells her books online, starting with a strong MySpace presence (more than 3,300 MySpace friends including fans of her books). She also blogs and following a recent trend in YA novels, created a book trailer for her book Dead Girl Walking. Yes, books like movies need trailers to attract the younger crowds.

Will picture books need animated trailers on Disney Channel or the Cartoon Network to attract book-savvy preschoolers? I hope not. Let books be books and let parents’ voices fill the imaginary gap between page and text.

Next on the editor side came Kendra Levin, editor at Viking Children’s Books who offered some heartfelt wisdom on the writing craft and the true inspiration of an author. Why do we want to write on a topic and why now? Being published feels nice, sure. However authors should also want 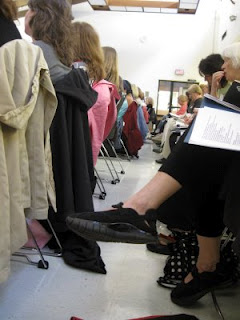 to write the book because deep inside they have a story to tell. To overcome the writer’s block, she advised to write a letter to a young person who really needs your book.

I found this very thoughtful. Book writing should not be about following trends and the big bucks (which, apparently, are a rare instance unless you’re a celebrity like J.K. Rowling or Lemony Snicket).

She also compared the author-editor relationship to a love match, a feeling echoed by Nathan Bransford when it comes to the author-agent relationship. In short, take your time when choosing to work with one or the other.

Ms. Muldrow came back to speak as an author, as she authored a successful lift-the-flap board book called Mama, What’s In There? where you lift a pregnant mama’s belly to reveal her baby preparing for life. Aha! Now, that’s a new concept.

A discussion ensued on what an author’s voice is, a concept that’s hard to explain. As I understand it now, the story is told through a unique person’s perspective. If your character reacts as anybody else would in a given situation, then the character doesn’t have a voice. There. Voice it, people!

Now I’m back in front of my computer and I feel partly depressed partly amped up. Breaking into (and maintaining yourself in) the children’s book industry is no picnic. But my head is full of stories to tell, so I’ll keep writing them until I’m actually paid not to write anymore.