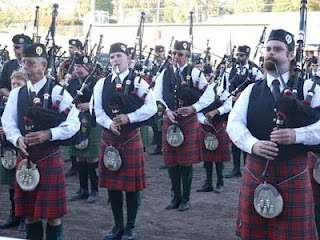 On the field of the Alameda County Fairgrounds, a lone bagpipe player started to play Amazing Grace at the Grandstand Show of the first day of the Scottish Highland Games. Left of the podium, I was looking at 600 massed musicians in full Scottish attire in front of me on the field. My gaze was flirting from the shiny wind instruments to the flag of California flapping in the wind behind when the voices of people rose in unison from the bleachers.

They were singing Amazing Grace, each note more forcefully than the previous one. At the pause, all voices turned silent and the lone bagpipe player let out the first notes of the hymn again. Only this time, 400 bagpipes droned together a third above the last note. The long single tone prolonged until all at once, all bagpipes joined in a powerful rendition of Amazing Grace.

From where I stood the mass effect was incredible and I choked back a tear (go ahead, feel free to be cynical). It was a beautiful musical moment and you can get a flavor on YouTube here, though really nothing beats standing inches from the first tartans. The song only lasted a few minutes. Three maybe? But those were worth the three previous hours we’d spent at the Scottish Highland Games sweating under 90 degrees.

On that note, who decided that scorchy Pleasanton was a good location to invite people to wear wool socks, eat warm meat pies and drink beer under the sun with no green hills in sight? Sheesh, coastal cities should really think of building a good size county fairground in the fog belt. But since Pleasanton it was, let’s go with Pleasanton.

Until today, I didn’t know what to expect from the Scottish Highland Games. Mostly I anticipated a Scottish-themed county fair, maybe funnel cakes and certainly sodas. I didn’t realize what a big event it was, nor what the different types of entertainment were. Clearly, the Caledonian Club of San Francisco’s website needs a good redesign on main page for the games where I could find neither the schedule nor a clear idea of festivities. For a yearly two-day event, it seems like basic information and the fact that I had to pay $7 for the program at the door was a bit much.

Nonetheless, once we made it through the gate I opened the program and looked for the athletic events. What’s a Scottish game if you can’t cheer to a big guy flexing his biceps for the caber toss event? For me that’s the iconic Highland game and we found it all right on the field where the Grandstand later took place.

Caber toss, weight for height, hammer throw are all part of the so-called “Heavy Events” and have constituted the raw essence of Highland Games for centuries.

We watched in awe as strong muscular guys cupped their hands to get a pole in upright position, started running and threw it in the air attempting to have it rebound on the ground and end in a 12 o’clock position relative to the run.

Next on the field, female participants were competing for the weight for height, a sport consisting in throwing a ball weight attached to a ring handle over a bar similar to that used in pole vaulting. Again, lots of muscle at work, a strong line-up and some loud cheering in the audience. I was psyched to see there was a women’s class for the championships. You go girls!

After the athletics, we made our way to the Living History corner where the Stuarts and Mary Queen of Scots were throwing late banquets in the sun and Caesar was enteraining his non-Roman guests in front of a display of gladiator armors. Honestly, who would’ve thought the Highland Games also included a Scottish taste of the Renaissance Faire?

If you knew nothing about Scottish history, you would have come out of there at least a little enlightened – and with a heat stroke. There was very little shade in that corner and we had a hard time watching the end of an archery demonstration in full sun.

Sun considerations aside, the props and costumes were very well made and seemed as real as they possibly could. The map of the vikings sea explorations were a delight to our girls (also the fact that Christopher Columbus did not discover America but the Vikings did), as well as the Roman weaponry and stone engraving with Celtic designs.

While ladies in fluffy dresses frolicked between stands, they did not draw my girls’ undivided attention as much as the re-enactment of Mary Queen of Scots visiting her nobility to re-establish herself as queen.

Now that looked great but we were too far to hear the words so we retreated to the air-conditioned hall of the Daughters of the British Empire for a breather. I would have loved to sit down for tea and scones any other day in chilly San Francisco by 55F but under the Pleasanton heat, just the thought was too much. Haggis anyone? We simply browsed through the shops and exited to find marching bagpipe bands.

On the way, a cup of pink lemonade shaved ice gave a second life to my girls who were wilting under the sun.

At snack time, we sat down for a shepherd’s pie from a vendor whose banner displayed the profile of Queen Elizabeth saying “Finally some decent food in our colonies.” Great shepherd’s pie, my girls want the same at lunch time at school.

That was minutes before we walked in the Grandstand Show and some Scottish dances by designated dancers from the local clans. The San Diego U.S. Marines Band joined in too.

We walked out of the games pouring over the performance of Amazing Grace. Both my husband and I shared the same feeling at the beauty of the piece. It made us forget about the heat and the somewhat loud aspect of county fairs with beer vendors and burger stands. Wish we’d gotten a kilt for my husband. Men in kilts look great.

One thought on “Scottish Highland Games in Pleasanton: Tartan, Bagpipes and Haggis”