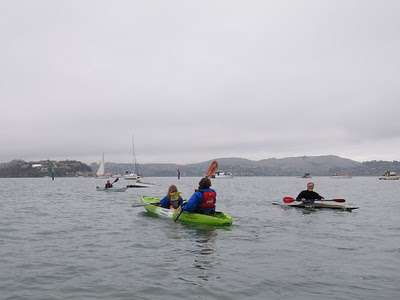 > Sea Kayaking with Kids in the Sausalito Richardson Bay

Sea Kayaking with Kids in the Sausalito Richardson Bay

Of all the winter activities, sea kayaking rarely tops the family list but in the Bay Area it really should. Winter offers some of the best conditions you’ll find year-round for kid water adventures – windless days, mild temps and abundant migratory wildlife. Where else can your kids count harbor seals’ teeth when they yawn? Without binoculars if you please. Short of swimming, sea kayaking is the gentlest way to get up close and personal with the rich aquatic life of the Richardson Bay, as hands-on and real as a grip on a paddle, napping harbor seals and silver wavelets for miles on end.

The day after Thanksgiving, my husband checked the fog outside the window, gave me a miserable look and asked “Must we go to Sausalito?” I nodded affirmatively. “It’ll be nicer there,” I offered. Truth is, I was intent on using a sea kayaking deal I bought on Zozi with Sea Trek Ocean Kayaking Center – $20 for 2 hours of stand-up paddle-board or sea kayak. Only rain would have stopped me but skies were dry. “Fine,” my husband said and we got our girls ready.

I had called Sea Trek the week before and confirmed it was OK to bring kids. They were completely relaxed about it and told me many parents paddle with kids on their boards or kayaks. “Come anytime,” they said, “No need to reserve ahead of time.” That’s exactly what we did – no Black Friday for us!

Now girls, we asked our offspring on the Golden Gate Bridge, would you rather kayak or stand-up paddle-board? To which they answered “Are we going to get wet?” I checked the outside temperature on the car dashboard – 61 degrees. “Maybe,” I said. Then “Probably.” I was glad my friend Becky had lent us two kid wetsuits. The wet factor was definitely greater with paddleboards than kayaks so they chose sea kayaking. Wise girls.

The guys at Sea Trek were rock stars and knew their bay inside out. They also knew how to make newbies comfortable with paddling without chaperon on 52-degree waters. Minutes after we arrived, they outfitted us with waterproof vests, life jackets (kids and adults) and kid-size or adult-size paddles. They then told us where to go in the bay and gave us a crash course on how to paddle, including the hand and thumb position on the paddles. Half-giggling, half-nervous, our girls took the front seat of each 2-seater and we launched off the beach and into the cove.

Out of the cove, we turned in the direction of the boathouses. My swimming instincts told me to scan for big boats or buildings so I’d know where to go when we came back. Good move as there’s nothing that looks more like a white boat than another white boat. Paddling away, my thoughts got wrapped around the extraordinary fact that we were moving forward and we hadn’t capsized so far. It was an exhilarating feeling and both my 6-year old and I giggled. We were floating on water!

Then the paddles started dripping water all over my pants every time I switched arms – obviously, there was a technique I hadn’t mastered yet and that put a slight damper on my enthusiasm, but hey, minor inconvenience for a quiet day at sea. By luck I was wearing capris and had a spare change of clothes in the car. My 6-year old in wetsuit stopped paddling when she noticed water dripping on her lap too. “Mom, there’s water on me,” she complained. No more giggling. OK, I’ll paddle – you relax and enjoy.

A few feet away we saw two black heads bobbing in and out of the water. “Seals!” I shouted to my husband who had zipped through the bay and floated way out there. “Yes, seals,” he shouted back, “but there are way more ahead of you.” Oooh, exciting.

I redoubled my drenching efforts and minutes later the sentinels on the pier appeared. Like beacons on wooden piles, California brown pelicans stood tall and proud at the top of a dozen posts and looked down on us land creatures trapped in plastic contraptions. Placidly they stroked their wings as we admired their feathery breasts, red bills and yellow heads. What graceful animals they are. One of them extended its wing like a cape above us and we were amazed at how wide it was. My 6-year old was in awe. Neither of us had ever been so close to a pelican, let alone dozens of them – we were speechless.

Barking noises drew our attention and I steered the kayak forward to where the sound came from. Harbor seals, dozens of them! My husband paddled next to me and we hung to each other’s kayak so our girls could enjoy the show together. These harbor seals were a riot!

For us, harbor seals are zoo animals and when by luck we see them in lagoons, they are too far to see well. From our floating station, we could count the freckles on their faces. We could appreciate their awkward sleeping position. We could breathe in the full splendor of a well-directed seal fart after a fishy meal. Wow!

We all wrinkled our noses and our girls went “Eeeew!” in unison. Yup, animals in the wild, fart, dog breath and all – the real deal, people! Some of the harbor seals grunted louder than others. Were they afraid of us? We pulled away.

Down the pier we glided slowly, making as little noise as we could to avoid alarming the pinnipeds. Water lapped at our kayaks’ hulls in a gurgly slushing sound. Some seals had reddish fur, others were brown, some got ready to dive, others went back to sleep. It was a full-on marine mammal show. Our girls took turns giving them names, pointing their physical features to each other. Then, “Dad? I’m hungry.” We checked our watch. 1pm! And turned around.

It took us 20 minutes to paddle back – currents were helping us – and I was glad I could recognize the big white boat marking the entrance of the cove. Swiftly we docked and disembarked. Our girls were both ready for lunch and ready for dry clothes. My husband turned to me. “Thanks for insisting, that was amazing.” On the other side of the beach, our girls couldn’t wait to tell their friends.