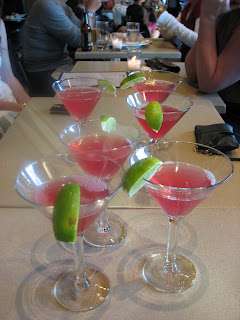 > Sex and The City

Sex and The City 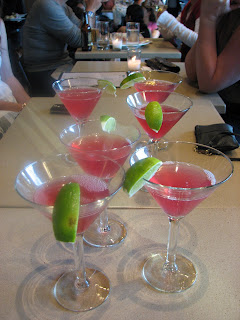 I just sacrificed to the female rite of passage of June 2008: a girls’ night out to watch the big screen version of Sex and The City. I discovered the TV series last week and fell asleep three times in front of it. But hey, it’s such a big societal trend that it just can’t be ignored, like it or not. All around me, friends went out in groups, downing cocktails and jaw-dropping at Mr. Big even bigger than on TV, the least attractive specimen of manhood I’ve seen in a chick flick lead role. He looks like a big sappy puppy. Who can get excited over a big sappy puppy?! OK, all of my friends. Sigh.

As far as I was concerned, the buzz was about getting out for drinks so we chose the best venue in San Francisco to combine Big and cosmos: the Sundance Kabuki Cinemas in Japantown.

I hadn’t been to the Kabuki since the remodel and it’s nirvana for movie-goers. A Bistro Bar with food and drinks downstairs, a Balcony Bar for over 21 with drinks and small plates upstairs, and the possibility to reserve exactly your seat. Needless to say at six chicks, we headed to the Balcony Bar. Margaritas, Shirley Temples and white wine glasses soon crowded our table.

Wherever I turned, women in tight dresses and high heels engaged in heated conversations over martini glasses. Oooh, that’s not a common sight in casual-hippie-laid down SF. Older women too, not stuck at home but going to town. SATC is not a teenage affair, oh no. You’ve got to have mileage to understand allusions to sexless married life with children or the beauties of spa waxing. So here we were, mostly over 35 or 40 or 45, expecting the silver screen magic of the love life of four New York socialites.

Well. Magic didn’t happen with me. I found the movie predictable from very early on and agonizingly long. But then as Jenny said, “The TV series is only 30 minutes long!” Yes, and this was 2 hours and 15 minutes long. Do the math. It is entertaining at parts, but if it were only for the fashion, I’d vote for The Devil Wears Prada.

Rite of passage over. Had fun though. Check the box.