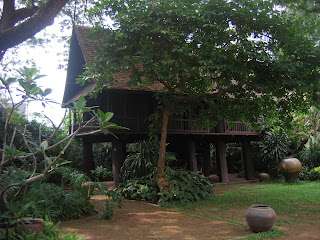 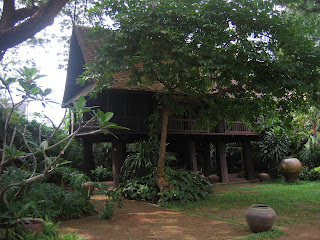 Ancient teak houses on stilts surrounded by green lawns and banana trees exist in Bangkok. You just need to know where to find them. The Siam Society, the kingdom’s foremost historical and cultural society, owns two remnants of a 19th century rural Thai houses. Built in 1848 by a northern Lanna princess on the banks of the Ping river in Chiang Mai province, the Khamthiang House was moved to Bangkok in 1966 and opened then as a museum. The Lanna culture and lifestyle are very particular to the northern part of Thailand and it is my favorite style here. Lovers of flamboyant rococo wooden snakes and elegant gilded roof lines, Lanna is for you.

That morning, my mother was meeting with Mrs Eileen Deeley, a Siam Society lecturer and expert on Chinese art, to discuss the launch of Patricia Bjalaand Welsh’s new book Chinese Art: A Guide to Motifs and Visual Imagery. I decided to show the ancient houses to my girls, to give them an idea of traditional Thai living. 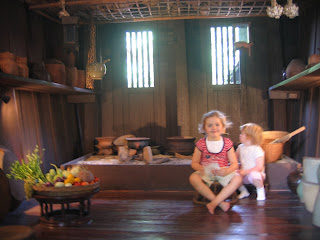 Before entering a Thai house, you remove your shoes. That part, my girls loved. Bare feet, they ran up the stairs to the verandah of the main house. Designed as an open plan, a raised covered terrace connects the verandah to the house which consists of a single long room. My 2-year-old paid attention to lift her feet to get past the threshold, as Thai doors in wooden houses always have a high step to keep spirits away (supposedly spirits are too dumb to get past the step). Inside the house were several educational displays on traditional ceremonies and house customs, experience enhanced by the sound of Thai music playing in the background. As typical young children, my girls immediately found the TV showing a documentary movie and sat down right in front of it.

The verandah then leads to a small room that was by far the most fun. It’s a traditional Lanna kitchen complete with vegetable baskets, earthen pots on fire stoves and utensils everywhere. The kitchen comes to life with another documentary movie showing a grandma in 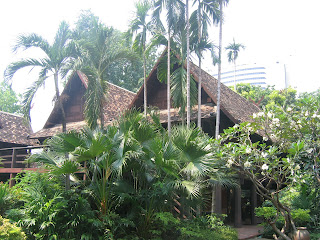 period costume preparing a typical dish (frog and sesbania plant curry) in the same kitchen with all the sounds of the cooking process (fire burning, grinding…) amplified through loudspeakers. My 4-year-old really enjoyed playing house by the hearth sitting on a small bamboo stool. The little one, on the other hand, ent out the other door and found the small wooden bridge leading to the other house, a rice granary. What I love in utilitarian Thai buildings is that they sometimes have a gap in the railing surrounding the house, to load and unload elephants. How cool is that?

After we repeated the tour a second time with mucho gusto, it was time to find my mom so we left the Khamthiang House and its lovely garden. So long mosquitoes…