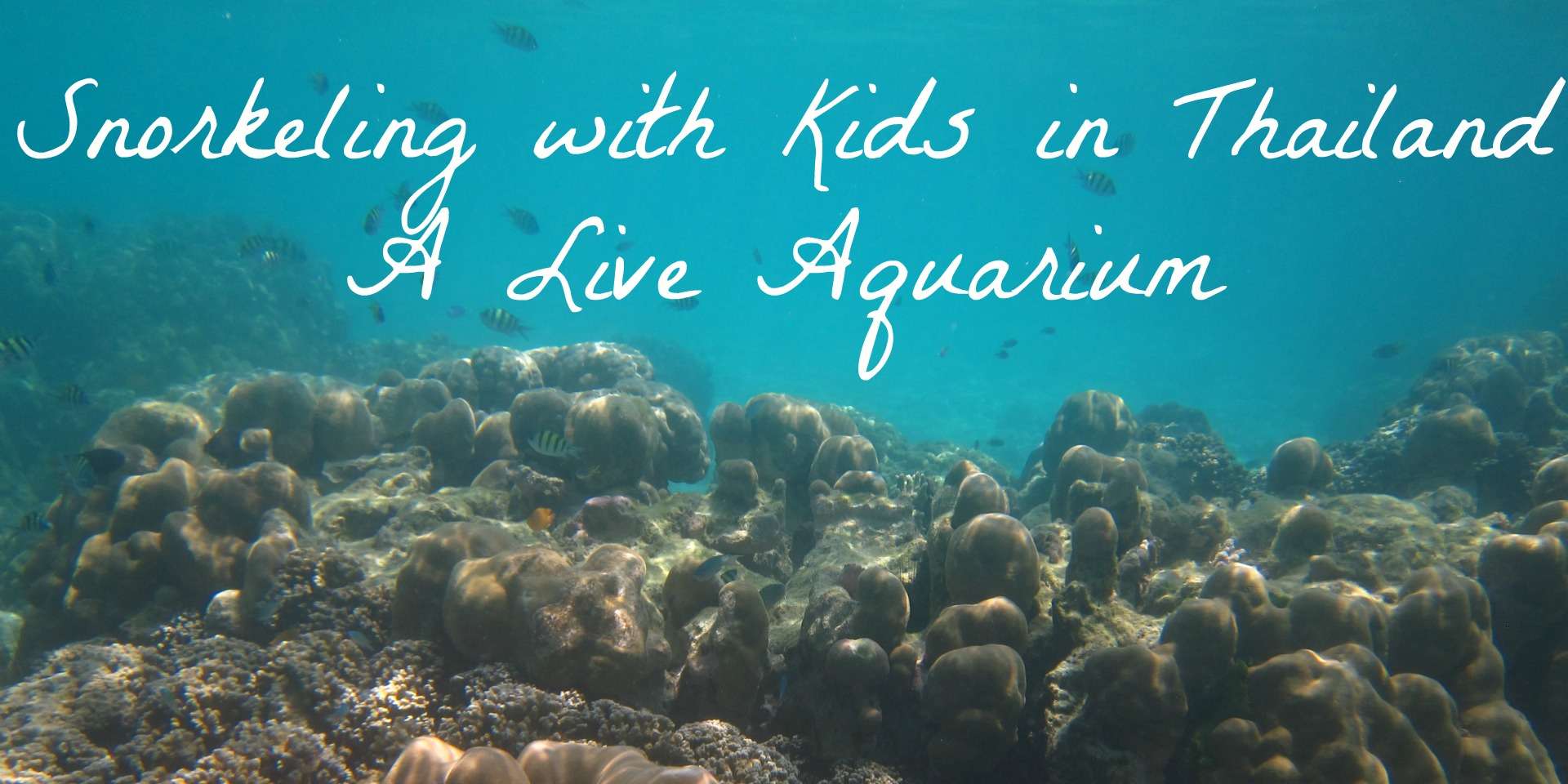 > Snorkeling with Kids in Thailand | A Live Aquarium

Snorkeling with Kids in Thailand | A Live Aquarium

If your family likes aquariums, snorkeling with kids in Thailand is a wonderful family experience for all swimming abilities. This post is part of an educational Free Unit Studies series and this week’s post is aquariums. I decided to take the idea literally and go back to the source of all aquariums.

At the Steinhart Aquarium of the California Academy of Sciences, my girls spent hours in front of the giant Philippine Coral Reef tank teeming with colorful schools of fish, coral reefs, sea anemones and starfish. Floor-to-ceiling windows of the deep blue tank really immersed spectators in the lagoon exhibit. It was wonderful but we wanted to go beyond the glass, be with the fish. Imagine my girls’ delight when we traveled to Thailand in the winter and went snorkeling in the sea. Seeing your first “Nemo” clown fish in the wild is pretty special, particularly when it’s playing hide-and-seek in sea anemones, its natural environment. That’s what I call a live aquarium!

Having grown up in New Caledonia where barrier reefs are some of the most pristine and healthy on Earth, I was both afraid to be disappointed and eager to share my love of snorkeling with my girls. Searching for healthy marine environments and preserved reefs naturally took me to browse through marine national parks, 10 of which are island-based in Thailand. We were lucky to explore two of them–Mu Ko Surin and Mu Ko Chang–and shared snorkeling adventures with friends. 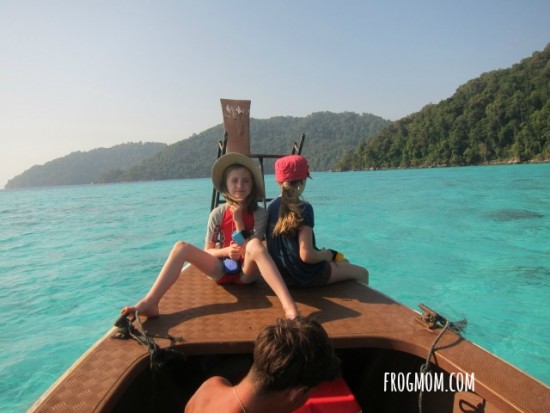 Located in the Andaman Sea, Mu Ko Surin is a real snorkeling treat for travelers looking for authentic experiences. The reefs are pure aquatic eye candy and the shallow reef system allows for easy fish-and coral-spotting regardless of your age or swimming abilities. To discover these islands fully, we stayed three days and combined snorkeling with jungle hiking and visiting a Moken sea nomads village. Mu Ko Surin is definitely a beautiful snorkeling site and the fact that it’s so far from the mainland (40 miles) greatly reduces the impact from mass tourism. Good news for the ocean! 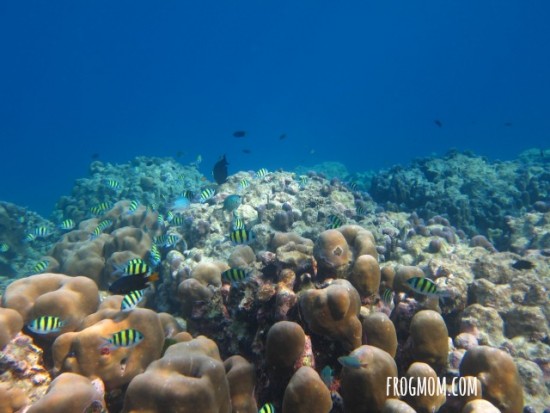 This picture is typical from our dives. The water clarity was incredible and we saw a huge variety of corals, worms, anemones and fishes. We could see clear up to 15 to 20 meters easily and on deeper snorkeling sites, we were lucky to catch a glimpse of bigger creatures such as sting rays, sea serpents and a small shark. One of us even spotted a green sea turtle! 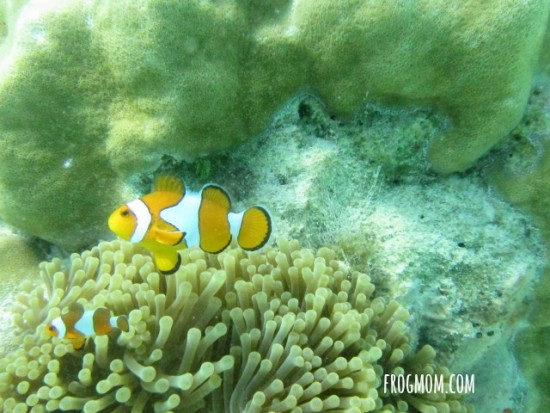 What my girls were really interested in was this little guy and his extensive family of clown fish siblings, no doubt a consequence of the Disney movie, Finding Nemo. The clown fish were having a ball playing in anemone tentacles and we could see clearly the symbiosis between the host sea anemone and the partner clown fish feeding on its host, keeping it clean at the same time. How incredible to see that live in the sea!

Sadly, I read recently that the wild population of clown fish had dropped sharply after Finding Nemo as they were hunted for aquariums. Let’s hope that Finding Dory won’t have the same negative effect on blue tang fish. 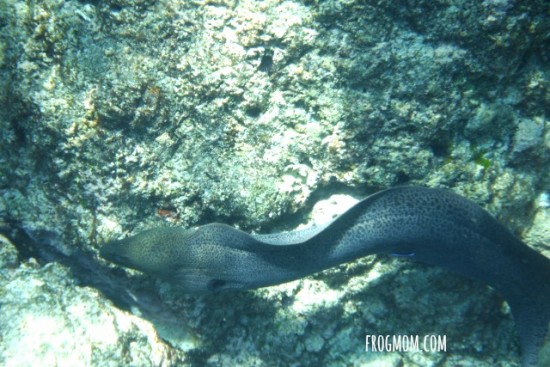 Last for Koh Surin, I’d like to share this shot of a giant moray eel taken by my daughter, then 10 years old. She was absolutely fascinated by the moray eel and spent the longest time following it, from rock to rock along the reef, trying to guess where it would poke its head. We’d only ever seen moray eels at the Monterey Aquarium and seeing one live in the sea was extra special.

How to Visit Mu Ko Surin

It was very well organized and I liked that they kept the group size small at less than 10. Since the islands are scarcely populated, a tour guide was essential and ours knew each dive spot really well, giving us tips on fish species, currents and what to look for before each dive. This gave us ample opportunity to socialize if we wanted to or to enjoy some “alone” time on the island.

For lodging, I booked a National Park bungalow with my girls instead of a tent on the beach which, in hindsight, was great. Indeed, the bungalow had electricity at night and became “electronic device recharge central” for others on the same trip. Overall, Blue Guru Diving did a stellar job on this Mu Ko Surin trip and the fact they are conscious of environmental pressures on coral reefs (and organize coral clean-ups) only makes them a better choice in my books. 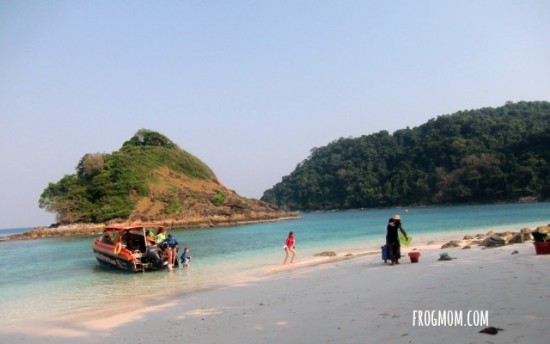 In the Gulf of Siam, Koh Chang is a large island that was only recently developed, as I remember going there in the late 80s and 24/7 electricity hadn’t arrived yet. It’s now fully electrified and daily ferries take tourists from the mainland piers to Koh Chang. Mu Ko Chang National Park includes 52 islands but the real snorkeling gem is Ko Rang, a small island surrounded by barely emerging rocky islands that make for fun snorkeling at low depths. 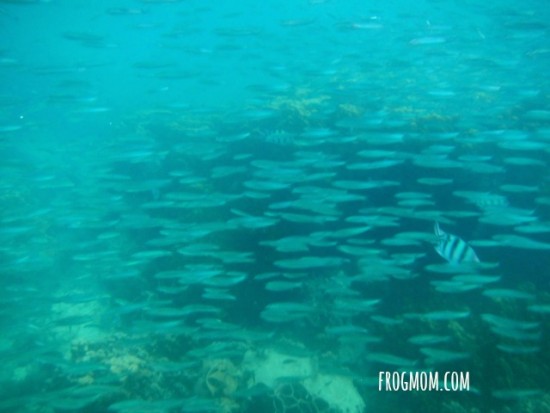 What really blew us around Koh Rang were the schools of fish. If we dived just 6 or 8 feet underwater, we could be surrounded by schools of fusillier fish, yellowtail barracuda or schooling banner fish. As soon as we entered the water, there were fish all around us. 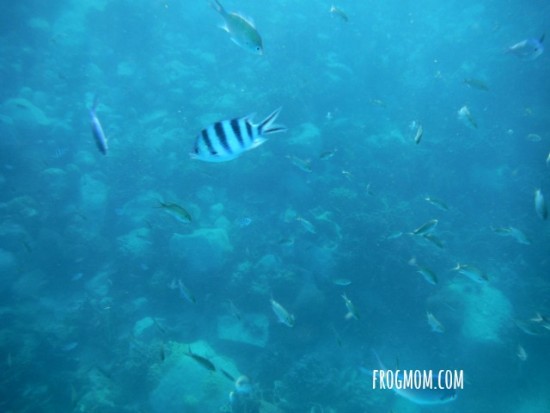 The kids loved seeing the schools of fish swim in harmony, all coordinated in the same direction, then break up suddenly, as soon as a bigger fish–presumably predator–arrived, to regroup and reform their school a few feet later. How do they do that? It’s a fascinating ballet and we’ve often seen that behavior in aquariums. 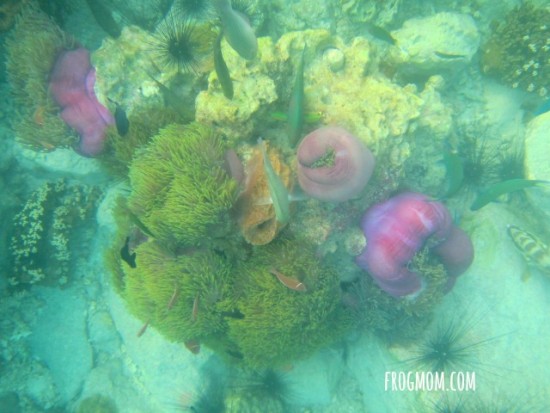 Giant purple anemones played host to many shy small fish that went in and out of the tentacles, like they were streets in a city. Watching the yellowish green tentacles sway with the current was hypnotizing. You can’t stop watching! Other sea creatures included giant clams and sea urchins, from which we kept a respectful distance. The beauty of snorkeling is that you’re in the tank with the fish–no aquarium windows to keep you far or “safe”–and as you’re only a guest, you learn to behave quickly. Sadly, most corals were bleached but the fish diversity was definitely there, indicator of a healthy ecosystem.

We took a half-day trip from Koh Mak–where we were staying at Koh Mak Cococape Resort–to Koh Rang with BB Divers. It was the afternoon tour, as the morning tour was already full, but it turned out that we had fewer crowds on site. They came to pick us up at the resort and took us on a boat ride to Koh Rang. There, we did two dives on different snorkeling reefs, taking a break on an idyllic beach in between dives. They provided snorkeling equipment, life jackets, fresh fruit and drinks.

BB Divers was great in terms of safety and logistics but you could tell that they were churning out tourists by the bucket-load. For instance, our boat was fully packed with more than 20 tourists and there was hardly any space for our belongings.

The owner of BB Divers, a German lady, also said some very disconcerting things that made me wonder how aware she was of issues faced by coral ecosystems. She was convinced that coral bleaching was not happening in the Gulf of Siam and that these corals had always been white, a fact that’s documented to the contrary in many independent studies. Bottom line. It’s only a half-day trip so I’d say, go for it, but don’t expect too much if you’re a big ocean lover. 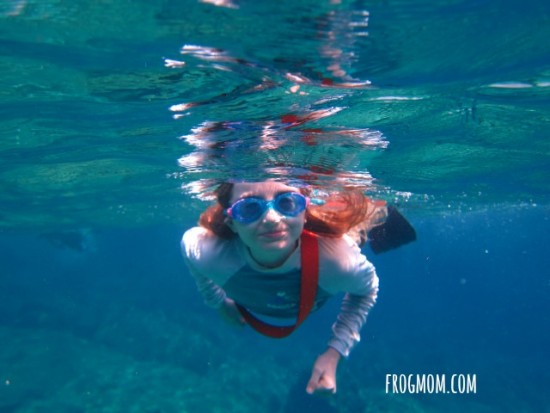 To help preserve the oceans and these snorkeling sites, please follow these ethics & guidelines.