Snow-holing with kids, have you tried it? It’s like digging your bedroom and furniture in snow and sleeping in it. First and foremost, you need snow. Lots of it. Then, there’s a bit of digging involved and it all ends down a snow hole. Excited yet? Of course, you need the right snow-holing spot to do it and Scotland is one such hot spot.

In Scotland, people snow-hole for fun. It’s usually part of a winter munro (that’s a Scottish mountain) or winter skills trip and it’s tons of fun. Intrigued, I took my girls snow-holing in the mighty Cairngorm mountains where Arctic temps guarantee deep winter snow every winter.

Initially though, my girls were a bit wary. On the way to school, I casually dropped that we were signed up to go sleep in a hole in the snow in Scotland. My girls are used to my crazy ideas so they suspected that I wasn’t joking. Are we going to be cold? Where will we find a snow hole? Can we bring hot chocolate? Can I read a book in my sleeping bag? The idea was so outlandish that they got excited about it.

In March, we flew from London to Inverness and drove from Inverness to Aviemore where we met our mountain guide, Mike. When planning for the trip, he had asked if the wee ones were robust. Fair question, his company had never taken kids so young on a snow-holing overnight in the Cairngorms. I believed that my girls would be tough enough, but the trip would prove more challenging than I thought.

In the coffee shop of Aviemore, Mike unfolded a detailed Landranger map on a table and showed us the area. Miles of mountains and forests all around. Sweet! Except. “The mountain is closed,” Mike said. Say again? Because of gale-force winds, the road leading to the mountain was closed and we had to rethink our plans. Was snow-holing off? No, but instead of an overnight, the snow-hole would be a day activity. We were disappointed, but what can you do? The picture below is how you close a mountain–a gate blocks the main access road. 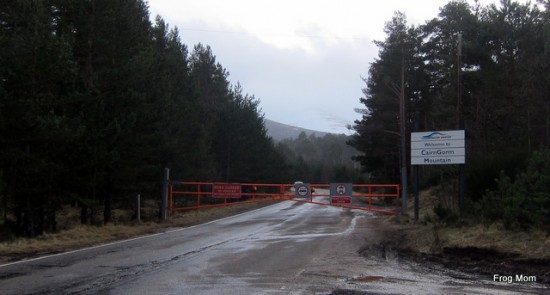 This was the new plan. On day 1, we were going to hike across the plateau, through a forest, to the snow slopes of the mountain and practice our winter skills. On day 2, we would go snow-holing. I’ll skip to day 2 directly as day 1 will be a separate story. 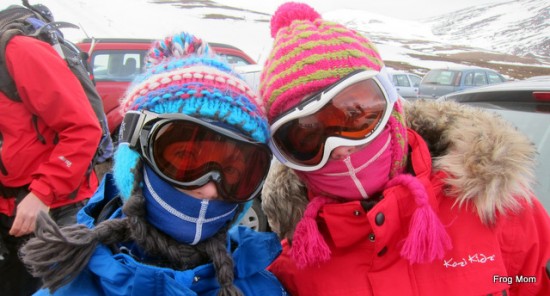 On day 2, the mountain road to the Cairngorms National Park was open and we parked at the skiers car park. While most people around us were walking with skis on their shoulders, we tied our snow boots, checked that we had shovels and a picnic lunch, and adjusted the height of our walking poles. My girls were all smiles in their new Kozi Kidz winter layers. 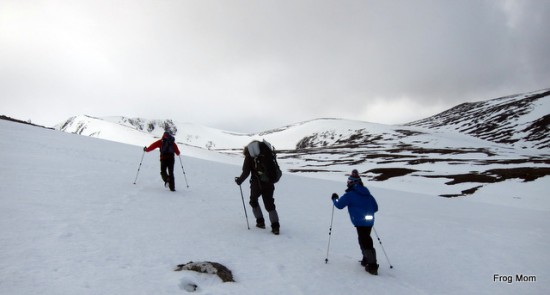 As soon as we walked over the first ridge, the cablecar and ski slopes disappeared. We could have fooled ourselves into believing we were the only ones on the mountain. Ahead of us, a series of round mountaintops black as coal with streaks of white. Mike guided us on a slight gradient and the rest of us followed in a neat line, our two girls sandwiched in the middle. While my 8-year old had no issue, my 10-year old suffered from terribly uncomfortable shoes and they were hurting her ankles. If not for the shoes, her progress would have been of the “robust” kind I had promised by email. 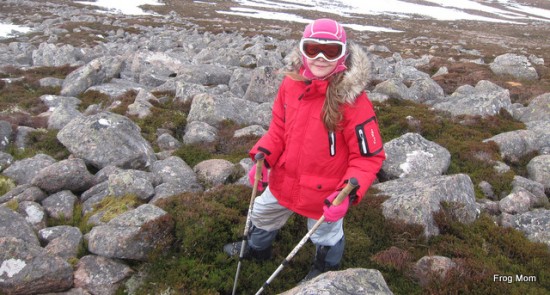 Here she is in a field of rocks, in the last stretch before we make for our snow-hole spot. On this picture, you wouldn’t know that we were roughly a mile away from deep snow. And yet. A few feet further, we saw Mike gesture wildly to us in silence. Ptarmigans! A couple of the grey-speckled white birds were hopping in the field of rocks. We were super excited to see them as Ptarmigans only thrive in Arctic tundra and besides Alaska or Canada, you can’t see them in lots of places. You’ll see a good picture of a ptarmigan further down, as we saw more of them later. 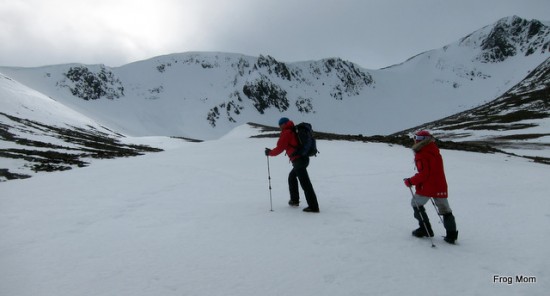 Finally, we arrived at the snow-hole spot. It was right at the foot of that hill, on the other side. My girls were knackered and getting hungry. We put down our gear, or rather we anchored our gear in the snow as a fierce wind was starting to blow. Dark clouds were also obscuring the sun. “Blizzard coming,” Mike said. 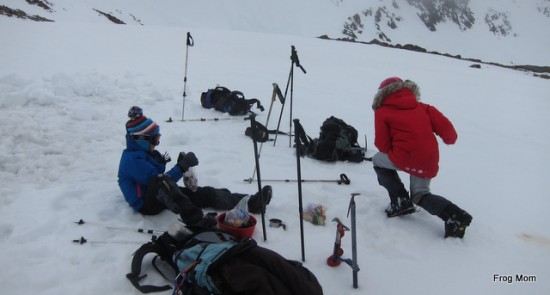 Immediately, we took to the shovels with gusto. Mike showed us the spot. If he was right, we would excavate the entrance to an existing snow-hole only two weeks old. It sounded as crazy as say, being on a boat and hearing that there’s a submarine a few feet below. We couldn’t see any of it but we knew that the hole was there, somewhere. All we needed was to go a few feet deep. So eerie.

Happy with a pre-lunch snack, my girls were busy making snowballs and building snowmen. I took a few turns shoveling but mostly, I was running after fly-away gloves and taking pictures. 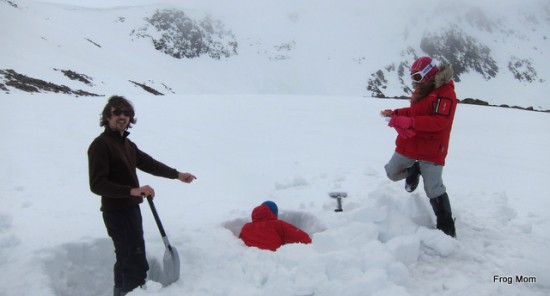 Snow-hole! Mike had found the entrance and was already three-quarters deep inside the entrance tunnel. The girls could’t believe how “lucky” we were to have found the snow-hole. My husband dug at another spot to find the opening to a second and a third entrance, other eerie underground features for good ventilation and light. And then, we went in. My girls disappeared in the hole feet first, rather eager. Then we pushed the “picnic luch” backpack down the slide, then we all came down.

Outside, our winter gear was firmly planted in the snow, waiting out the blizzard. 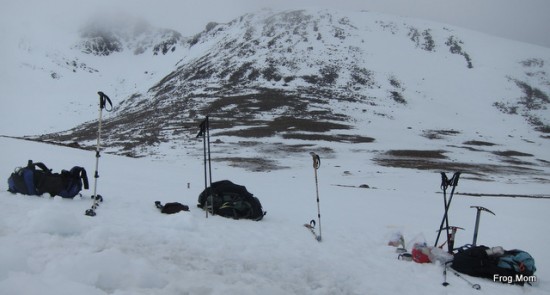 Inside, it was a different world. No howling wind, no biting cold, no darkness. The snow-hole was paradise. 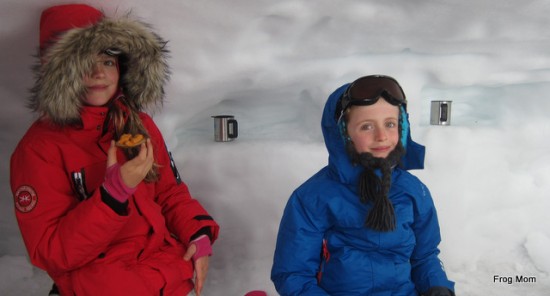 My girls even spotted two snow shelves to put their cups of hot chocolate. Look at how happy they are. “It’s like a treehouse, only better!” said my 8-year old. She and her sister were two happy purring cats. With the picnic laid out on the packed snow floor, the snow-holing experience was proving to be a success. 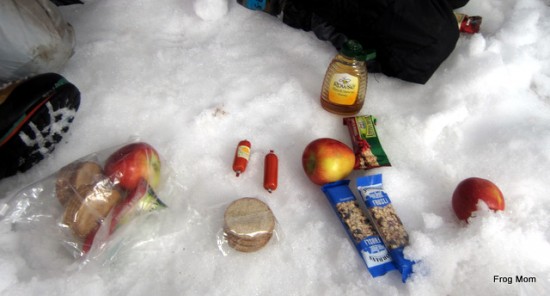 Oat cakes, cheddar cheese, apples, honey, fruit bars, tomato puree – it was a feast for a king! My girls loved it and so did we. This is a short video of Mike showing around the snow-hole.

Mike was the nicest guy ever and a true believer in natural navigation (compass and map), something that I appreciate a lot. Apparently in white-outs in the Cairngorms, having a GPS is largely not enough and I can believe that. He even gave a few guidelines to my girls in the snow-hole, showing them how to position the compass, measure distances and find directions. Really neat. 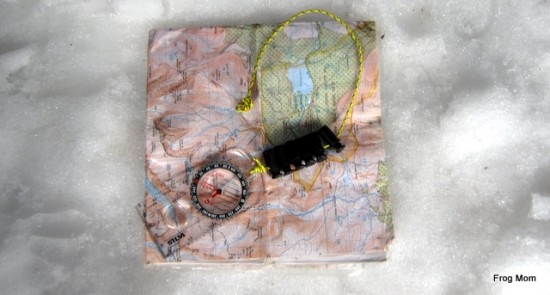 Deep inside, I could totally see myself spend a night or two in the snow-hole but the time came to go back. It was clear that my girls would have loved to stay longer, but hey. We had a plane to catch that night! Plus, they were in for two treats on the way back. 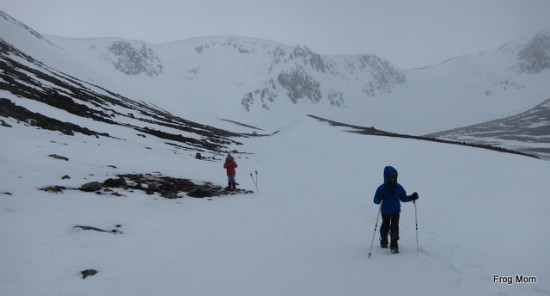 Outside, the day was dark but then, it was already mid-afternoon. We quickly shoveled snow back into the entrances to “plug” them and made our way back to the car park. The first treat was another pair of ptarmigans, not shy at all and very close to us. This is one of the fluffy fellas. 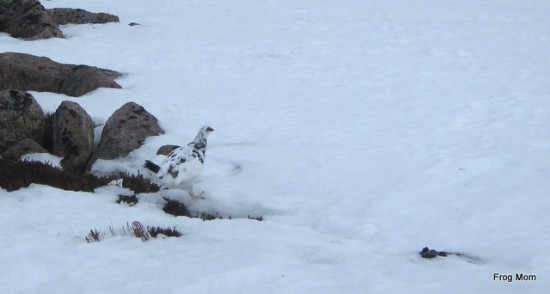 I’ve seen these birds described as “white chickens” but to me, they’re closer to fat pigeons or their close cousin, the grouse. Eventually, the birds flew away and we arrived on top of the ridge along the ski runs. The snow was packed and the slope was nicely smoothed. Do you know what my girls did? 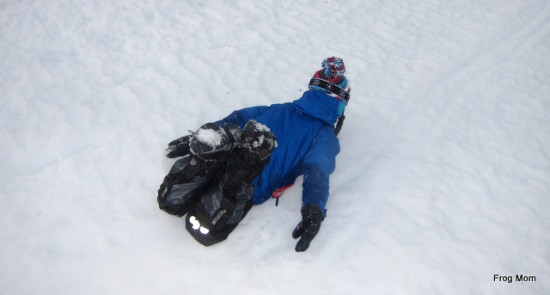 Sledding on their tummy!

They were so excited to find that it worked, that they sled all the way down to the bottom of the hill, sometimes asking us to pull them with our walking poles.

It was the end of our snow-holing day in Scotland. I’ll leave you on this picture of a well-deserved no-sled sledding ride. Didn’t I say that snow-holing was fun? 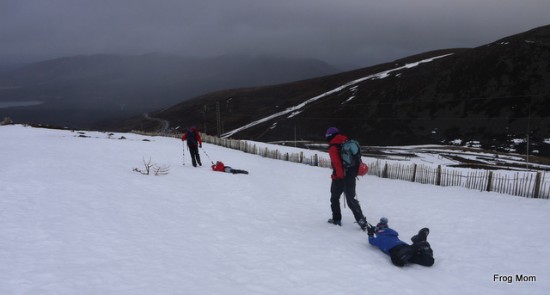