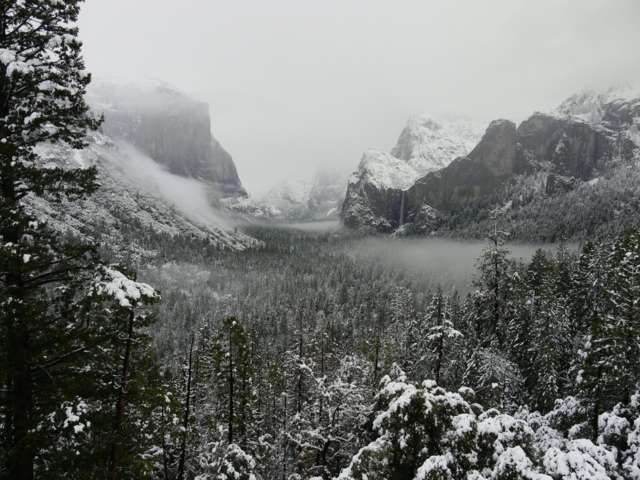 > Snow in the Yosemite Valley

Snow in the Yosemite Valley 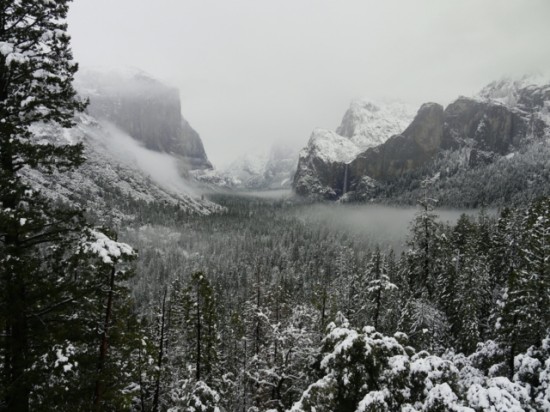 You know the feeling when you’ve been waiting for something for so long you don’t think it’s going to happen? Snow in the Yosemite valley – I’d been waiting for that for a long time. Four years, exactly. That was the last time I saw snow in the Yosemite Valley, in December of 2007. Every year after that I missed it and cursed myself for bad timing. This year there was only one winter storm that blanketed the Yosemite Valley fully white and I was there! Pure chance, it was pure chance but I happened to be there and now I’ve got 200 pics to hold on to. I’m so thrilled with this winter wonderland experience, it was breathtaking. So here, this one’s for you Yosemite lovers from near and far – how snow fell two days and two nights in the Yosemite Valley.

If you want to get a taste of the valley in movement, you can watch the video I made. As my husband says, it’s not a heart-pumping Ghost Protocol but you should feel fairly relaxed seeing all that snow: Snow in the Yosemite Valley

In early February, I booked 2 nights in mid March at the Yosemite Valley, hoping there would be snow at Badger Pass. I didn’t dream there could be any snow on the valley floor, the winter had been far too dry. However three days before our trip, the weather turned. Forecast indicated good chances of snow. The Bay Area was drenched in rain storms. I started monitoring the Yosemite webcams all day long, obsessively. Then when we drove up to the Yosemite Valley on Saturday morning, it rained as we got closer but the roadsides were getting white. Snow! And from Tunnel View, it was pretty clear that snow was there to stay.

Driving into the valley, we didn’t need any snow chains and decided to check out Bridalveil Falls. Slush was the noise we got out of the car, big old wet slush. So far the snow was so wet it made for muddy slushy trails and my shoes got wet right away. [way to go, Kamik “snow boots”!] With a “ugh” I plodded along and we all got to the falls on a slippery path. My girls’ rain boots proved to be the answer to the wet snowy trails that day.

Visibility wasn’t all great, it was raining and we decided to check in at Curry Village before heading out to lunch. With minimal winter lunch service, lunch was a quick forgettable affair and we decided to stroll through the Yosemite Valley Indian Village. At that point, big wet snowflakes were falling on us and we got wet pretty fast. To dry up, we went inside the Indian Museum where the ranger played us music on five different flutes. As we were about to exit, we heard someone say…

Yes! Wet snow had turned to real snow. Though it was still falling fast, it was definitely fluffier than earlier. Jazzed up, we took the car and parked by the trail head for Yosemite Falls. Time to explore! First we decided to wander through the meadows and try to follow the boardwalk buried in snow. Through a menacing white landscape, we were in fact walking above seasonally flooded meadows. Soon enough the girls decided that making a snowman was more important than “exploring” and stopped every step of the way to make round stacks. The snow was still sticky and the results weren’t pretty but they stuck to their idea and slowly, slowly followed us. On the bridge above the Merced River, they had a blast pushing snow into the water.

Our meanderings eventually took us to the  bridge under Lower Yosemite Falls where we were interviewed by a weather reporter for Fox40, Darren Peck. Sadly our footage didn’t make it into his story but it was pretty cool being interviewed on an iPhone and I had a fun chat with his friend Athena Palombi, a chef and food blogger at Athena Cooking. Meanwhile, my girls were making a family of mini-snowmen watching the falls. One of these small guys got perched on a log overlooking the creek. Guess it was a good staging idea, considering the number of people who came by to immortalize the falls with mini snowman.  This mini-snowman is now traveling around the world on Japanese iPhones much like the garden gnome in Amelie.

At the end of the afternoon we retreated to Curry Village, verified that the heater functioned in our heated tent cabin, and went for an early dinner at their pizza place. Not a place I would ever recommend by the way, the worst pizza I’ve ever had. I’d sooner eat a cold Campbell soup of the can in freezing rain on a windy day than return to that pizza place.

It snowed all night. It snowed and occasionally, big packs of snow fell off the branches of the tall pine trees and landed with a thump around our tent cabin. When we opened the door in the morning, it was the prettiest sight ever. Light blue powder snow like you imagine in your snow dreams. Light and fluffy. If only we didn’t have to put on snow shoes to reach the restrooms! That I would gladly have done without. Once we were dressed, there was not a minute to waste. We packed up, loaded the car and left for a scrumptious brunch at the Ahwanee. From our table facing the cathedral windows, we enjoyed every single bite with the best views on the granite arches outlined in white snow.

Last on our list, we had to see Mirror Lake surrounded by snow. Not just us, everybody who was staying in the Yosemite Valley had to see Mirror Lake. It’s one of those magnet spots that you just have to see if you want to check your Yosemite Valley list. Fortunately the crowds were very thin since the path was snowed in and you’d have to hike 2 miles to get to the lake. When we got there, there were less than a dozen people snapping photographs and a couple who unleashed their dogs (2 big dogs) by the lake so they could frolic around. I still don’t understand why people bring dogs to the Yosemite Valley. They are forbidden almost everywhere and when they’re not, they have to be on leash. Seriously, that’s not a dog life.

Anyhow, we left the “crowds” by the lake and followed the path around where it curves. There our girls found the perfect slide. Climbing boulder by summer, snow slide by winter – that’s the fate of big inanimate objects with a slanted shoulder! A little ways behind, where we could almost not see Half Dome anymore, we stood and listened to a family of ducks quacking away on the Merced River. It made me shiver to watch them paddle around along the frozen banks but they didn’t seem to suffer from the cold at all.

Last but not least, we completed the mission my girls had started the day before: a big old-fashioned snow man. This one sported a goatie on his face, a bowtie around the neck, an acorn-buttoned shirt on his big torso and his head was sparsely “haired” with pine needles. What’s more important, it was taller than both our girls. We didn’t give him a name but had a good chat with him. Finally we retraced our steps to the car and saw no less than 5 other snowmen in construction along the way. I guess that’s you do in the Yosemite Valley after a snowfall: you build snowmen and hope they’ll outlast your stay by a few days, if only to prove you were there.

I hope you enjoyed this.

One thought on “Snow in the Yosemite Valley”