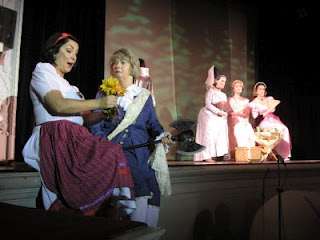 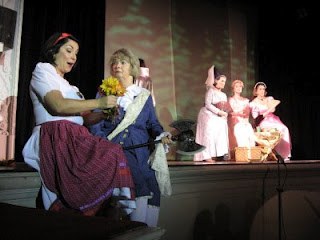 Last Saturday we took our girls to see the Children Theatre Association of San Francisco’s production of Snow White and The Seven Dwarfs with a musical twist. Based on the story by the Brothers Grimm, Carol Weiss – a Los Angeles performer – wrote a book, composed the music and then the lyrics to a one-hour musical play for children.

In her version, the Evil Queen has a Witch Wicked sister who’s about to lose all her powers and asks the queen to provide Snow White’s heart-shaped locket. Sir Pompous (on the photo sitting next to Snow White) is the sorry court chamberlain who’s ordered to axe Snow White during a court picnic in the woods. Thanks to a wise-cracking mirror who keeps speaking in rhymes and only answers to questions in rhymes, the Evil Queen’s plot is unmasked and Snow White is rescued fro a very deep sleep.

All the elements of the story are there plus a few. Now, what really surprised me (not in a bad way) was the age of the actors. I’m not saying all, but a good number were certainly grand-mothers and I’m not used to children’s shows with grand-mothers on stage (again, not all of them). But boy do they rock!

You should see the ladies on stage, giddily dancing and jumping in coveralls with hard-helmets and lights on their heads as the seven dwarves. It just cracked me up. I wish my own grand-mother had done that for me. I would have attended every single show! 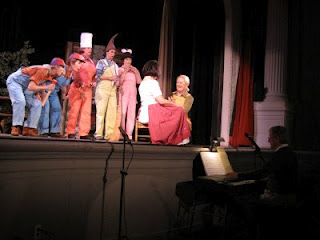 That said, my girls did not even notice that the Prince Charming was played by a woman and we all throroughly enjoyed the show. The sets and costumes were executed with an attention to detail (I especially enjoyed the dwarfs’ log cabin in true West Coast style) and some lines were very funny. Kudos to Sir Pompous and Sir Silly, they were hilarious.

The man behind the keyboard mastered the tunes as well as special scary or sound effects which added another dimension to the play. No wonder, he’s Bill Keck, the musical director of Beach Blanket Babylon.

My only comment would be on the sound system as it was sometimes hard to hear distinctly what the actors on stage said and it felt like some had microphones and others not. Therefore uneven volume. But what the heck.

It’s an all-volunteer troupe and the ticket only costs $12. It’s a lot of fun.