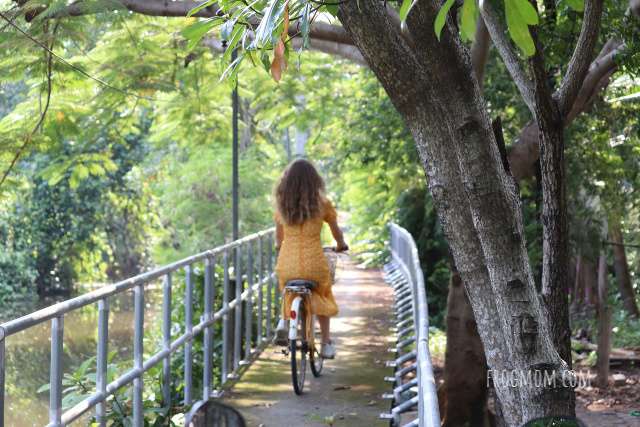 > Sometimes it’s OK to get lost. Biking in the jungle. In Bangkok.

Sometimes it’s OK to get lost. Biking in the jungle. In Bangkok.

It’s late October 2019, I’m in Bangkok with my 16-year-old daughter. Guided by a woman who does at good job of directing tourists to an unofficial pier, advertising free boat transfer to Bang Krachao in Phra Prabaeng, a jungle paradise, we walk past a metal gate towards the Chao Phraya River. 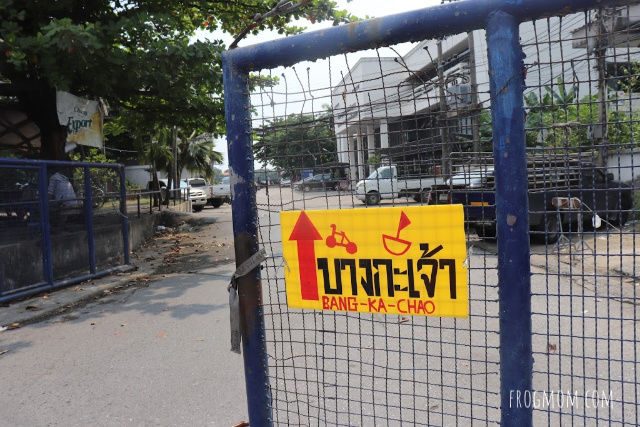 We are at Wat Khlong Toei Noi, next to Khlong Toei Port, formerly Thailand’s only major port for sea transportation of cargo. Pushed by the wake of constant boat traffic on the Chao Phraya river, plastic bottles and random litter float around by the river walls. Nothing unusual on this river, unfortunately, and only the visible part of a river heavily polluted by industrial and household waste. 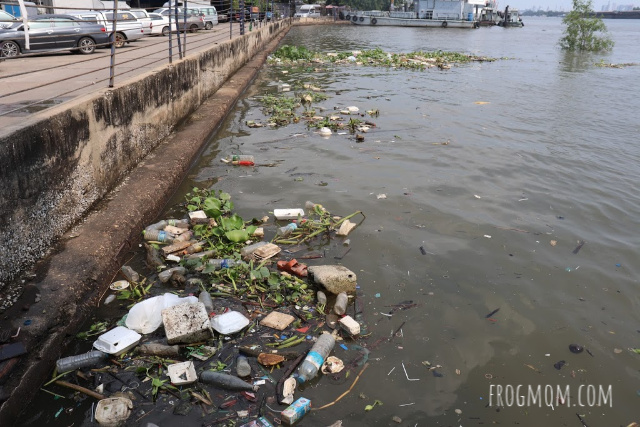 We hop on a longtail boat and cross the Chao Phraya river to Pae Jeob Pier in about 10 minutes. When we disembark, I reluctantly hand over my passport as collateral to rent two bicycles and off we go. All bicycle rentals ask for proof of identity to release bicycles and though this makes me nervous, I have no other document with me. In exchange, we get two beach cruisers (no gears), a bottle of water each and a basic map that shows a set itinerary. Now, you may wonder why we’re here. It may seem as if I’m channeling my inner Grumpy. The truth is, we love Bang Krachao (บางกะเจ้า), known as the green lungs of Bangkok, and have previously visited in 2009 and in 2016. Bang Krachao (or Bang Kachao, sa it’s spelled in Thai) sits at the confluence of three natural ecosystem — the mangroves, freshwater swamp forests and tropical rainforest — making it a unique green oasis in concrete-heavy Bangkok. 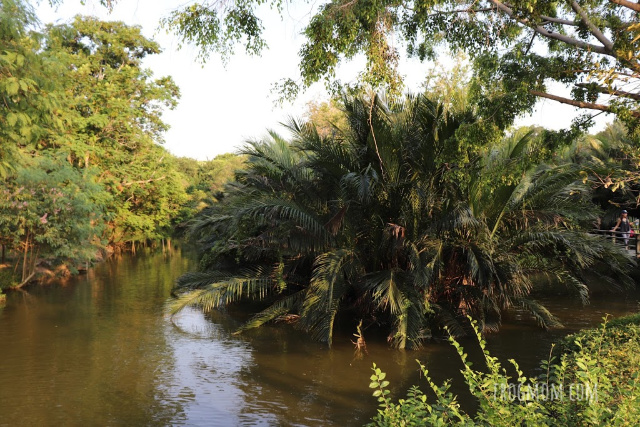 Today, we’re just looking for some escape from the loud, polluted, bustling city center in Bangkok. I do know, however, that I’m no big fan of following a set itinerary that I haven’t designed.

After adjusting our bike seats, we’re off on a dirt packed road that quickly turns to asphalt. Our rental bikes have seen better years and the seats aren’t very comfy but for 80 bahts a day and a free boat ride, we can’t ask the moon. They will do.

“I can’t believe we’re not in Bangkok anymore,” my daughter says after a few minutes.  “It’s so peaceful and quiet.”

It is. The beauty of Bang Krachao lies in its protected status as a nature reserve. After the death of King Bhumibol, the military vowed to keep 60% of the island undeveloped. To put things into perspective, the percentage of green areas was 85% in 1990 and went down to 73% in 2001, which means that 60% is a step backward in protecting this place. Corruption and illegal development are the island’s worst enemy and urbanization will only push up land prices and drive away farmers. Not a desirable prospect for the last protected green space in Bangkok.

As we cycle past a large modern house, I can’t help but notice that it is new and others are being built a bit further. They are also larger, more expensive houses than the traditional farmer houses on the island — homes for wealthy Bangkokians and that is a real problem in an area whose biodiversity is preserved by traditional organic farming. 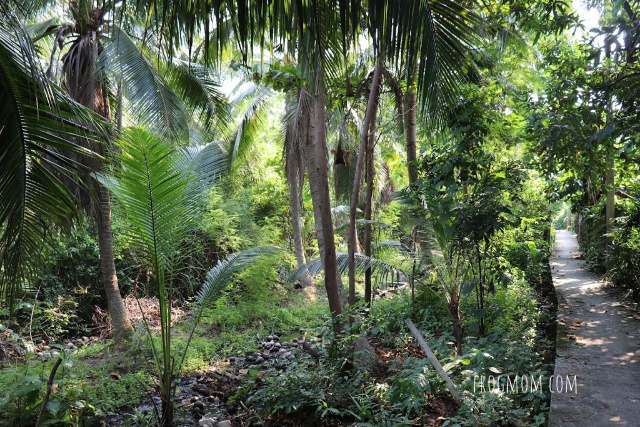 Still, we soon reach coconut plantations, evidence that agriculture in Bang Krachao remains an important source of income in the area – it is still widely practiced by 800 homes. People here mostly farm fruit, decorative plants, fish and frog ponds, or on a larger scale, mango, coconut, rose apples, guavas and banana. On the roadside, we keep passing mango trees and I teach my daughter how to ID the wrinkly dark green leaves of mango trees. They might not be fruit-bearing in late October but they’re handy trees to spot — if only because they’re a favorite hideout for snakes. 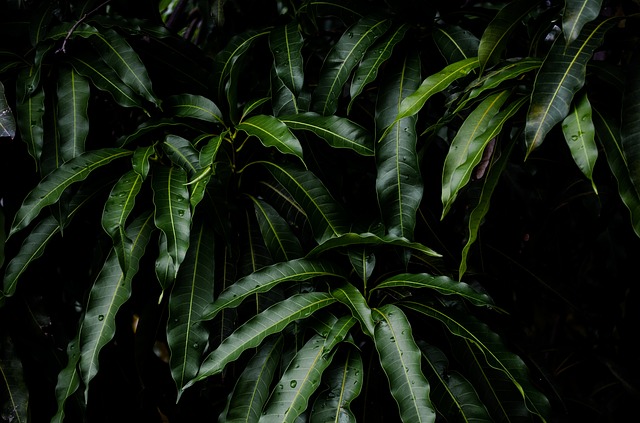 Regularly spaced, dozens of coconut trees grow on small stretches of land surrounded by green-brown water. Water is everywhere on Bang Krachao. In fact, all trails and roads are mere elevated paths above water and nosediving into a swampy canal with snakes and whatnot is not a prospect anybody would look forward to. Pinned to a coconut tree, a cardboard sign advertises Muay Thai Boxing lessons. “You lose your fight, you fall in the water,” jokes my daughter. Quite the incentive to stand your ground, right?

Traffic becomes denser, with more pickup trucks, cars and motorcycles passing us on the narrow road. I spot a sign to turn right for a temple. “Turn here,” I tell my daughter. We turn into a quieter lane cutting through fields and swamps. “Stop!” I yell. I’ve spotted a cormorant perched on a concrete pillar. I get off my bicycle to take a photograph. 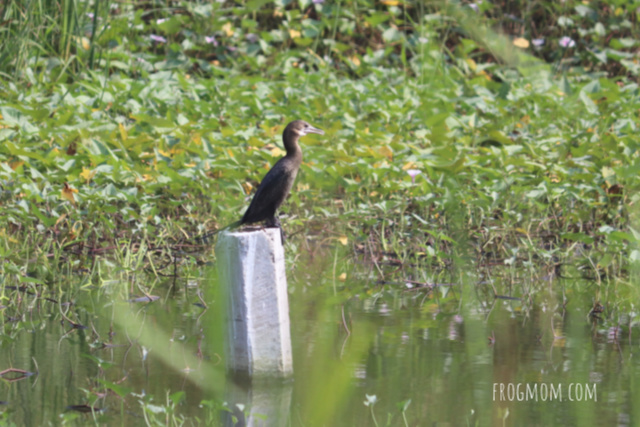 It’s so stil that I wonder if it’s a decoy, until the bird moves its head. Fine, it’s fishing for dinner. A lot of wild birds call this peninsula home. On power lines later, we spot an Asian openbill stork and a pied fantail. Other common birds on the island include little egrets, common mynas, olive-backed sunbird and ashy drongo.

So far, we’ve been loosely following the map given by the bike rental but I don’t like these main thoroughfares. They’re too busy. This is not what we came for. I spot a tiny path disappearing in green foliage. Let’s get lost.

“Turn here,” I tell my daughter, pointing to a small elevated trail that’s going deep in the jungle.

I realize that cycling lanes now have sturdy barriers on both sides. This must be recent. Up til two years ago, you could nosedive left and right all you wanted and it made cycling all the more scary or exhilarating, whichever way you looked at it. I bet you there’s been a few accidents – what with Bang Krachao and cycling becoming popular in Bangkok. Having barriers does add a certain level of comfort when you cycle and even more so when a motorcycle arrives from the opposite direction and you have to scoot over to make room. Which happens to us not far from this spot. 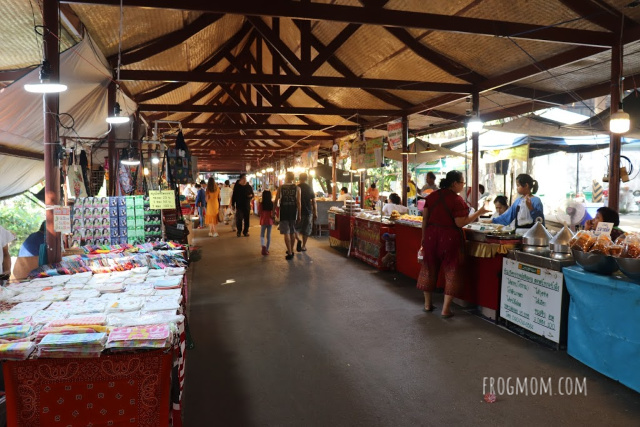 Fifteen minutes later, we park our bikes by the side of the road and walk into the shade of the market’s stalls. It’s nice to be in the shade. It was getting really toasty without sunglasses and hats in the sun. Lucky for us, they’ve got all that at the market. By the time we get out, we both sport new sunglasses and new sun hats. Back in the saddle again.

On the way back to the bike rental, we decide to explore Sri Nakhon Khuean Khan Park And Botanical Garden. I’ve never visited it before and it would be rude to ignore a botanical garden. We turn off the main road, cycle through a busy parking lot, up a bridge and down to a roundabout where a cycling trail starts in the park. It’s wonderful. No cars, no motorbikes – only a few bicycles and pedestrians, mostly families enjoying a nice day out. After a short ride, we find a lake with two pagodas on stilts. 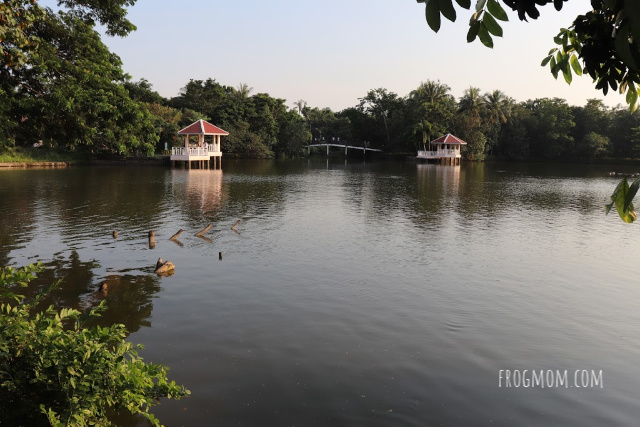 Why, the place is lovely. I had no idea. A bit further, a wandering bridge crosses another lake. 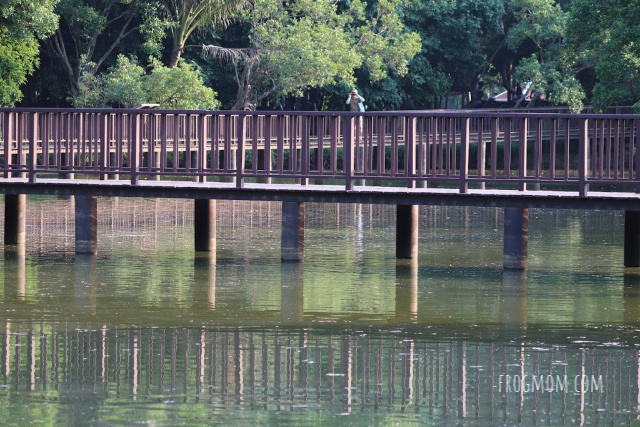 While waiting for my daughter who creates an Instagram story for her friends in the UK, I check out the trees around us and spot green fruits hanging from trees. They are very high and couldn’t be reached any other way than by climbing up the trees. I don’t know what they are but they look like large round avocados and I bet you they’re edible. I’ll add that fruit mystery to my “to ID” list. 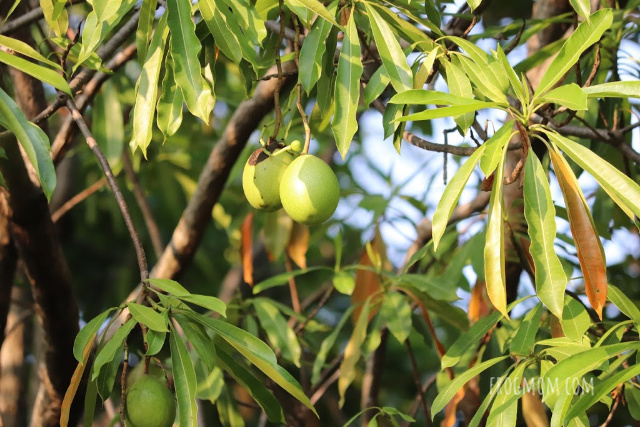 Beyond the lake, we have two options. We could turn left to a birdwatching tower or turn right and retrace our steps to the entrance. My daughter is eager to return so we turn right, promising ourselves to come back on a future visit for the birdwatching tower. We exit the park and get back on the road to find the pier. 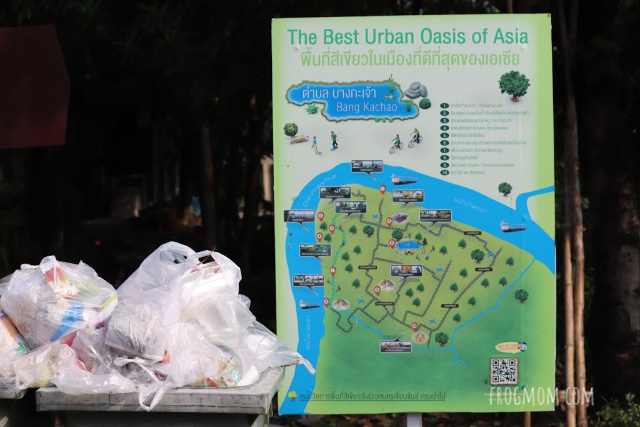 Ironically along the way, I find this sign about Bang Krachao being the best urban oasis of Asia next to … a pile of trash. Wrong place, wrong time for these trash bags.

We carry on and soon, go through a small village, interrupting a game of football by boys on the road. They stop to let us go by. 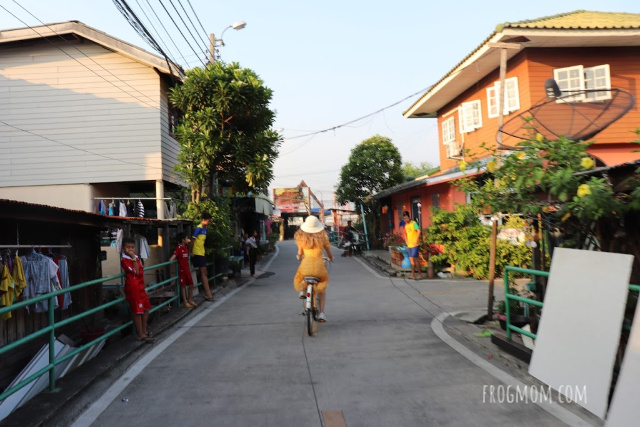 After the village, we catch up with a pick up truck that’s actually a grocery on wheels. The back is an open display of bananas, rambutans, coconuts, mangoes, persimmons, and more. Suddenly, I wish to contribute to the farming community in my own way and signal the woman sitting at the back by the weighing scales. She stops the driver and there, I purchase a kilogram of rambutans (35 bahts) and three big fuyu persimmons (10 bahts each). Persimmons are one my daughter’s favorite fruit and I’m a huge fan of rambutans so I’m very happy about this chance encounter.

A few minutes later, we’re back at the pier. On the other side, concrete Bangkok. That’s my mother’s condominium by the way. Can you spot a balcony with green plants on the 15th floor? She’s created her own green oasis at the top of this big building, overlooking the river and the real green oasis of Bangkok. 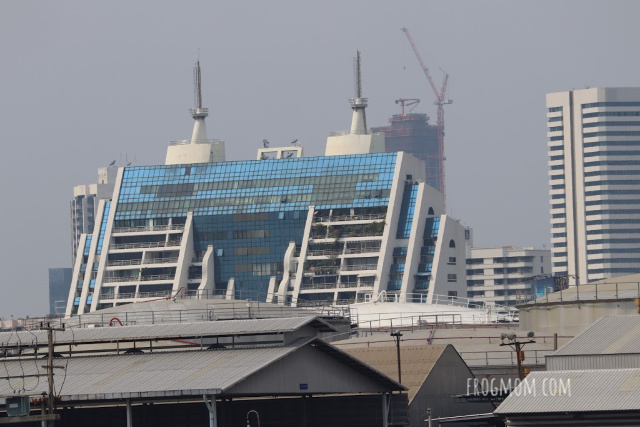 Across the river, big temples can be seen too. They are huge and usually include whole communities with religious schools, praying halls, onsite dorms and more. 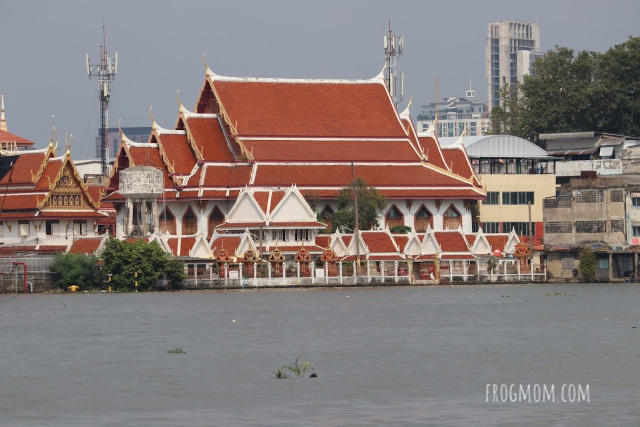 We leave Bang Krachao and take motorbike taxis to get home at my mom’s. It’s been a great adventure and visiting the botanical park has completely restored my faith into Bang Krachao’s future for environmental education purposes. Schools come here to learn about the ecosystem. It’s very reassuring. The more kids know about their natural environment, the better they’ll want to protect it.

Bang Krachao will survive and I hope that when you visit it, you enjoy it as much as we did.