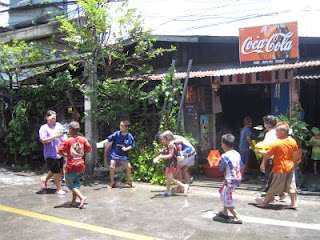 The anticipation leading up to Songkran is much like Halloween’s. There’s something scary outside your door and you’ve got to gear up and fend for yourself.

Songkran – the traditional Thai New Year – is a celebration of renewal, getting together and merit-making but it is popular for reasons not quite so lofty: getting doused on the streets. Just how much you get doused depends on your carelessness – or street fighting spirit.

The first two days, Songkran was very subdued because of the political crisis. It’s not until after the red shirts left the capital that festivities really began full swing. Silom Road got closed off to car traffic as well as a few other tourist-dense areas.

The governor of Bangkok declared two extra days of Songkran holiday and people made up for the at-home days. At night, we crossed many pick-up trucks loaded with 20 people and more, drums, guitars and loudspeakers, everybody wet and merry singing their hearts out. When Songkran and booze don’t mix too much, it’s really a fun and uniquely Thai celebration.

One thought on “Songkran 2009 in Bangkok”